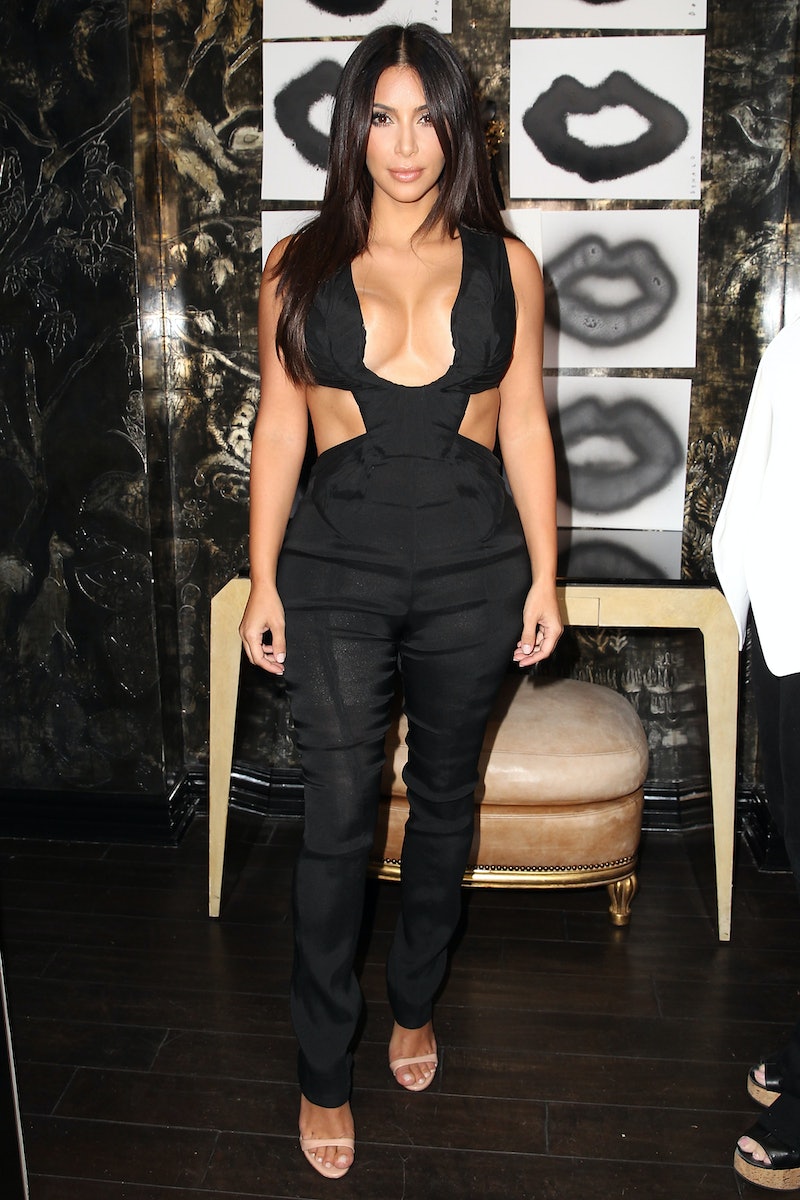 Hi, want to talk about Kim Kardashian's Paper cover some more? Because I do. E! Online declared that they have EXCLUSIVE DETAILS on the behind-the-scenes action at Kim's shoot with photographer Jean-Paul Goude. Let's remember that E! is the mothership network of Keeping Up, though, so anything they say about Kim K. might be glossed. But their account of how the photoshoot and the now notorious butt shot (even though it's been mere hours) came to be seems plausible, and that's coming from me, a forever skeptic.

E! reports that the cover shot meant to break the Internet was spontaneous: "Kim went into the shoot with just the one cover image in mind: the champagne pic, because Jean-Paul Goude wanted to recreate his pic he took 30 years ago. That was it. But Jean-Paul and Kim hit it off and they asked everyone to leave and they both got creative. No publicist, no magazine execs."

Hear that? No publicists, no magazine executives, just a man and his muse. The source went on to say, "[Goude] had to be inspired and sketch her first and have a vision. So he came up with that—ripping the dress off. Kim loved it!"

And who wouldn't be inspired as all hell by Kim? She's on fire, a veritable mogul, married to Kanye West, himself a legend. Even though Kim K is everywhere, there's still an aura about her that makes her seem untouchable and unreal. I have mad respect for her for taking creative control and collaborating spontaneously with Goude to produce a shot that, though it might not have "broken the Internet," definitely has eclipsed all other internet content today.

I've been thinking about what Bustle's Jessica Blankenship said of the cover: "Mrs. West is smirking at the entire game, toying with the media (social and otherwise), not in a subversive, secret, sinister way, but in a joyfully manipulative way that seems to speak to an understanding of both her power and the utter frivolity of that which she reigns over." I couldn't have said it better myself. And though I myself imagine Kim surrounded by a hoard of image consultants, publicists and mama Jenner, I love to be surprised at the fact that she shut the door on her entourage to just be with Goude. And from the resulting cover, she seems like a blast to work with.

As per usual whenever Kim so much as takes a selfie, a bevy of haters have outed themselves with their tired, boring opinions: she's a mom, she shouldn't be sexy! She's disrespecting herself! But from that smile on her face on the Paper cover, it doesn't seem like Kim's gonna be phased. "Don't hate the player, hate the game" is what that incredible butt says to me. One final bit of joy from behind-the-scenes: "The shine was from this special oil that sprays on, and Kim's make up artist Mario Dedivanovic rubbed it on her." What a lucky son of a gun.