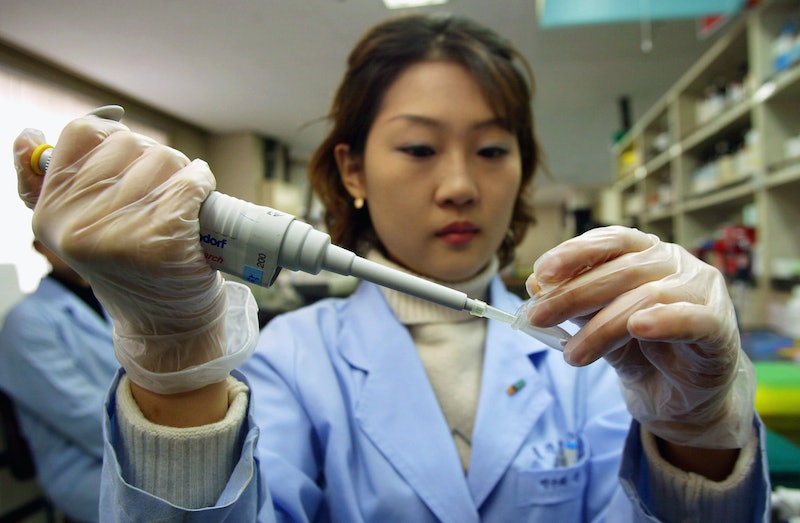 It’s been more than 100 years since Marie Curie stunned the world with her brilliant, radioactive science and nabbed a Nobel Peace Prize for it, yet female scientists are still far too rare. This lack of women in the laboratory is reflected in fiction, as well. Finding a formidable female physicist or powerful lady programmer in lit is almost as uncommon as encountering a non-cringe-inducing depiction of a stay-at-home dad (other than Neal Grafton from Landline by Rainbow Rowell).

We need these brainiac role models, both in literature and the real world. It’s been almost 100 years since women won the right to vote, and the Hobby Lobby decision came down five months ago. I think we can all agree that we have a long way to go before we kick back and claim that men and women share equal opportunities. Reading about female scientists not only inspires us to use our own considerable cognitive capabilities, it helps us recognize their extraordinary contributions. Plus, their complicated, exceptional lives make for totally engrossing reading.

These books feature female scientists who are brilliant and complex, and can keep up with the boys in the lab any day:

Alma Whittaker, The Signature of All Things by Elizabeth Gilbert

Brilliant and insatiably curious, Alma Whittaker becomes a world-class botanist in the 1800s despite her gender. Whittaker certainly isn't some shrinking wallflower — she's not afraid to have an opinion or call BS on someone else's. But being highly educated and articulate in an age when women were basically ornamental is isolating. So, Whittaker finds refuge, acceptance, and true fulfillment in deciphering the intricate workings of the natural world.

First of all, Amanda Jaworski has a magical cat named Schrödinger, which automatically makes her awesome. Add in the fact that she’s a brilliant physicist training to be the first person on Mars, and it becomes clear that this woman is a total BOSS.

The book was first published in 1984, and became an immediate cult classic because of its weird and wonderful blend of feminism, political commentary, comedy, and physics. Jaworksi rollerskates through the halls of NASA. ‘Nuff said.

Not only is Dr. Singh a top-of-the-line medical researcher, she's also an intrepid (if initially hesitant) adventurer, trekking into the Amazon to trace the disappearance of a colleague and confront a fire-breathing dragon of a former professor. Somewhat predictably, Dr. Singh’s journey becomes one of self-discovery as well, but her inner turmoil and emotional struggles are totally relatable. Even as we escape into her Amazonian adventures, we understand her feelings of disconnection and loneliness.

“Callie Vee” as she’s affectionately known, could have been a girlhood bosom buddy of the aforementioned Alma Whittaker. This book was a Newbery Award Winner, and for good reason. At the turn of the 20th century, an 11-year-old girl was expected to be learning the art of housewifery. Instead, Tate devours Darwin’s The Origin of Species and catches wildlife specimens for her Granddaddy’s collection. Tate is fiercely independent, wickedly smart, and needs a sequel, please.

When The Eight was published in 1988, Cat Velis was described as “a female Indiana Jones.” In fact, she’s much more intellectual (she’s a computer analyst for a high-powered New York accounting firm), and untangling the conspiracies that surround her requires a bit more cognitive effort than raiding your average Lost Ark. (This isn't a burn on Indiana Jones; he's a dreamboat). Velis is smart and gutsy, and her equally audacious daughter, Alex, proves she’s a chip off the old block in The Fire , the sequel to The Eight.

Talk about being leaving your comfort zone. After less than a year of marriage, Lusa Landowski (a first-rate entomologist) finds herself widowed and in charge of a family farm that is deeply in debt. Landowski's in-laws resent her inheritance of the farm and her snobbish, city-girl ways, but Landowski is determined to make it work. With ingenuity, grit, and sheer stubbornness she applies her esoteric knowledge to the real world with brilliant effect.

You’re probably picturing Jodie Foster, which is fine, but take it from me — the novel is a bit more complicated than the movie. And definitely worth the brain workout. Arroway is still a total badass, displaying an uncanny understanding of science at a young age. In the 7th grade she goes to the library to prove to herself that the number Pi is irrational. Yeah, she’s crazy smart. She continues to blow through glass ceilings and push boundaries throughout the book, refusing to let anyone hold her back. Hell, they can’t even keep her on planet Earth. (BTW, the guy below is actually Carl Sagan, the author.)

Mary Anning is impossible not to root for, especially since she really was a female scientist. In the early 19th century the scientific community was a firmly entrenched good ol’ boys club, and they weren’t exactly welcoming women with open arms. Despite the fact that Anning discovers an ancient marine skeleton that leads to new ways of thinking about the creation of the world, she is shunned and ostracized by her peers.

So, like many successful women, she finds comfort in female friendship. Anning’s story is an inspirational tale of scientific discovery, but it’s also a testament to the incredible gift that is a best friend.

For a library nerd like me, Dewey Kerrigan probably has the coolest name ever. But that’s just the beginning of her awesomeness. Kerrigan is an unapologetic lover of all things science, and plans to go to MIT, but she’s never a “nerd.” She is simply a smart, social girl who happens to love building gadgets and radios. This middle-grade book won a bunch of awards, but the glimpse it gives into the lives of scientists will appeal to everyone. The scientific community of 1943 Los Alamos, New Mexico, is explored in detail, and it’s fascinating. Plus, the sequel is just as good.

Really? You think I could make a list of superior smarty-pants heroines and not include Hermione Granger?

She’s super-intelligent, totally driven, and constantly saving the less intellectually inclined Harry and Ron with her brilliance. I’m pretty sure that her top-notch magical maneuvering would translate to mad skills in muggle science. In fact, I’m pretty sure there’s nothing that Granger couldn't do if she put her mega-mind to it, making her a brainiac of the highest order.

Susan Calvin's character is a "robopsychologist," and this collection of stories is essentially her reminiscing about her life's work, which is studying the aberrant behavior of robots. Woah. What makes Calvin's character even more interesting is that the stories were written in the 1950s, a time when chauvinism was rampant in every aspect of society, and certainly in the world of science. Calvin was an anomaly, both because of her success in a male-dominated field, and because her character was created by a man. Calvin's ability to rise above, maintaining both her cool and self-worth, is the exact reason we need more female scientists.

More like this
16 Novels That Paint A Realistic Portrait Of Abortion
By K.W. Colyard
'Bridgerton' Star Nicola Coughlan Confirms Season 3 Will Focus On Colin & Penelope
By Grace Wehniainen and Alyssa Lapid
10 Must-Read New Books Out This Week
By K.W. Colyard
The Time Traveler’s Wife Book Has A Heartbreaking Ending
By K.W. Colyard
Get Even More From Bustle — Sign Up For The Newsletter