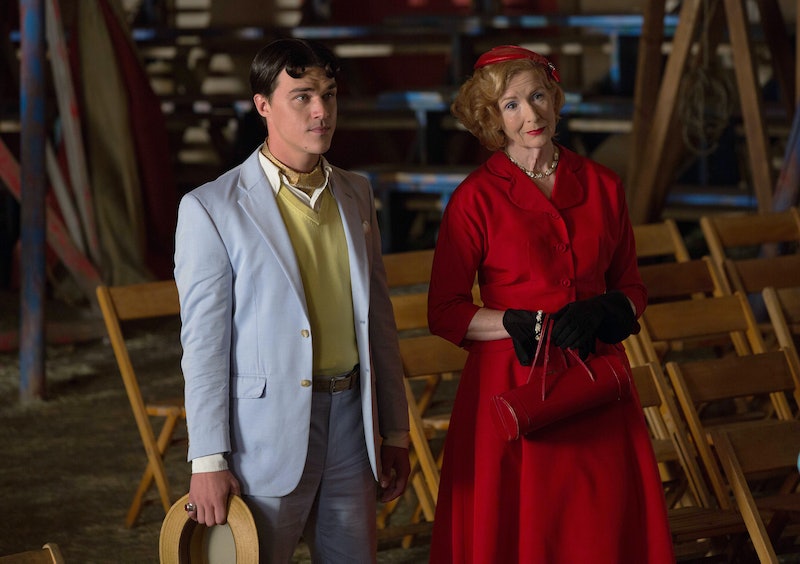 Ever since Dandy Mott, a grown adult, picked up a bottle and drank from it, we knew there was something amiss in the sensitive fella's home life. And then when we saw the man, well, you know, brutally murder two people, then we knew there was something amiss in the killer's home life. And though we're still waiting for answers (as if you would think Ryan Murphy would deliver us answers just episodes into one of his series), we seemed to get a little more clarity into Dandy and his mother Gloria's relationship on American Horror Story: Freak Show 's most recent episode, "Bullseye."

During the episode's first moments, Gloria attempted to supply her son with "prophylactics" (this is the 50s, after all) after he reunited with conjoined twins Bette and Dot. (Who, by the way, he not only loved, but planned to marry in the same episode he decided he couldn't love any longer. There is no plot Murphy can't hurry along faster than a McKinley High School football player can sing Journey on cue.) Dandy (the most excellent Finn Wintrock), not only shrugged off his mother's suggestion, but told her it's time she "give her son up to another woman." Oh, and this was after Gloria mentioned in passing that inbreeding has done enough to ruin the Mott family.

Clearly, considering Dandy's psychological problems, we can safely assume that the murderer is a product, or at least a grand-product, of inbreeding. But did that family, ahem, tradition truly pass on through the generations? Gloria is rather affectionate towards her childish spawn.

We've been expecting to come to that conclusion for some time. After all, Wintrock hinted at a questionable relationship between Dandy and his mother in a chat with TVLine:

We talked about a kid who’s incredibly wealthy but emotionally stunted at a certain age, and we’ll learn that there was some trauma in his youth — and also that there might be a bit of incest happening. We’ll also learn that maybe, more broadly to say, psychosis runs in the family.

And we certainly saw more of that psychosis during Wednesday's new episode, when Dandy raged at Dot for refusing to "play by the rules" of his secret-sharing game. But, really, Dandy hasn't played the game with us either. Though we know that a) he's crazy, b) as well-dressed as Patrick Bateman, and c) the sole person on the planet who actually likes clowns (man, he would totally win the Monopoly game, wouldn't he?), we know very little else about why Dandy is the way he is.

Because this is American Horror Story, here's guessing we'll continue to have to keep guessing.