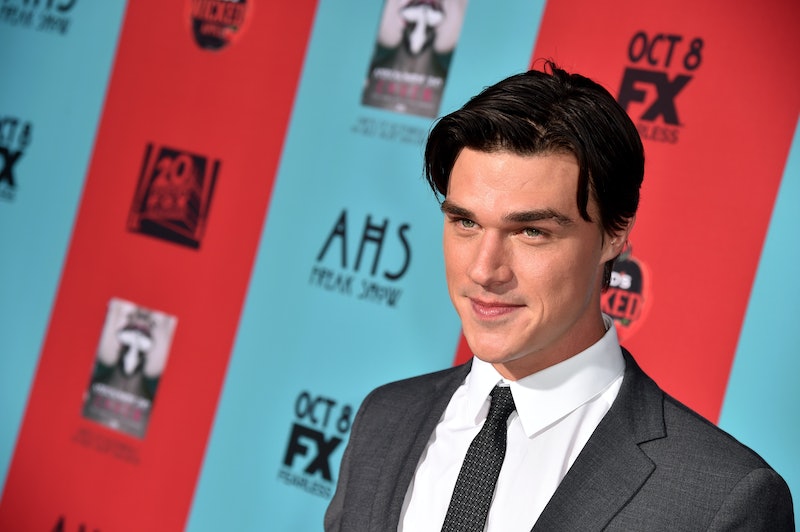 Season 4 of FX's anthology series American Horror Story got off to a bang last week, with the premiere of Freak Show drawing in more viewers than ever. Those who tuned in were drawn into the world of a 1950s carnival lorded over by a delusional German expatriate with no legs. The titular "freaks" include a two-headed woman, a man with lobster claws for hands, the world's smallest woman, and an "illustrated seal." But while these physical peculiarities actually came off as quite pleasant people, by far the two most freakish characters on the show were Twisty the murderous clown... and almost more importantly, Dandy Mott (played by Finn Wittrock), a bored rich kid who visits Elsa's sideshow.

How is it that by far the most normal-looking character on the show so far is also quite possibly the scariest? For one thing, Dandy is spoiled by his doting mother Gloria, and is therefore stuck in a state of frightening arrested development. Dandy and Gloria are locked in what's undoubtedly the most unhealthy mother/son relationship this side of the Bates Motel. Secondly — and most importantly — he's played to eerie perfection by Wittrock in his first role on Ryan Murphy's horror show.

Wittrock told TVLine that he plays Dandy as a sort of perverse Peter Pan, stating that his character is "a kid who never grew up," and that Dandy is "incredibly wealthy but emotionally stunted at a certain age, and we’ll learn that there was some trauma in his youth — and also that there might be a bit of incest happening. We’ll also learn that maybe, more broadly to say, psychosis runs in the family."

This being American Horror Story, it's only a matter of time before the show's two freakiest characters team up. In this week's episode, in order to alleviate her son's boredom, Gloria Mott gets Dandy a playmate: a lovable and not-scary-at-all clown. (Spoiler alert: it's Twisty.) Naturally, this partnership between homicidal maniac and spoiled rich kid won't lead to anything good. "[Dandy] becomes very enamored by the clown and becomes his acolyte," Wittrock teases in the same interview. "The clown basically becomes his role model for life. He wants to be him. And he might succeed to a degree." (Great. Like we need another homicidal maniac running around Jupiter, Florida.)

So where did the 29-year-old Massachusetts native get his practice at being such a creeper? From 2009-2011, Wittrock appeared in 112 episodes of ABC's All My Children as that stalwart staple of the daytime soap: a long-lost son. His Damon Miller was quite the troublemaker during his two years on the show, as he committed a string of burglaries, almost killed his girlfriend in a car crash, had sex with his girlfriend's mother, and then skipped town. Swell guy.

Apart from several one-episode guest roles on the likes of ER, Criminal Minds, and Law & Order: SVU, Wittrock's only other semi-regular television gig before Freak Show was a small recurring role on Showtime's Masters Of Sex. In four episodes of Season 1, he played Dale, a hustler who had relations with Beau Bridges' closeted Provost Scully.

When Wittrock isn't playing bad boys, prostitutes, and dandies on television, he's also an accomplished stage actor, having appeared in productions D.C., Chicago, and New York. He made his Broadway debut in the 2012 revival of Death Of A Salesman directed by Mike Nichols (The Graduate) and starring the late, great Philip Seymour Hoffman as Willy Loman. Wittrock played Happy alongside Andrew Garfield (The Amazing Spider-Man) as his older brother Biff, and he received specific praise from the New York Times' Ben Brantley for his portrayal of Willy's youngest son. The critic referred to Wittrock as "a funny, poignant and ripely detailed study in virile vanity as a defense system."

The year 2014 will undoubtedly be remembered as the year that Wittrock's career took off, as the actor successfully made the transition from the small to the big screen. In addition to AHS, he also appeared in four films this year: he had small roles in the Colin Farrell and Russell Crowe fantasy Winter's Tale and Darren Aronofsky's biblical epic Noah; he had a supporting role as Taylor Kitsch's ailing boyfriend Albert in Ryan Murphy's HBO movie The Normal Heart (where he had the ignoble end of literally being thrown out with the trash after succumbing to AIDS); and he will next appear in Angelina Jolie's highly-anticipated war drama Unbroken .

Chances are very high that the despicable Dandy Mott won't live out the season. (According to Naomi Grossman, who plays Pepper, Freak Show has an average of two deaths per episode.) But it's good to know that, once Dandy does meet his maker, we won't have to worry about not seeing Wittrock again. The way his career is headed these days, we'll be seeing him everywhere.