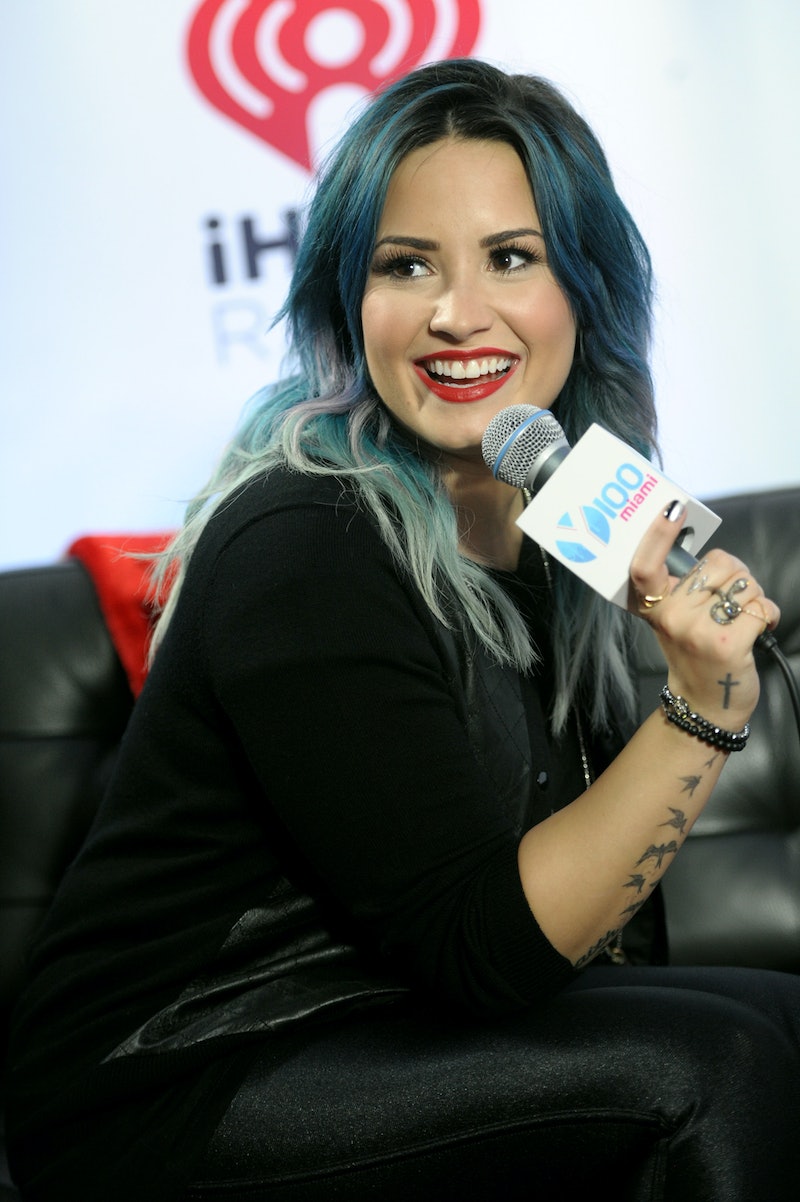 This is a subject that is very close to Demi Lovato's heart and so it's no wonder that she so often ends up speaking up against the stigma of it and in defense of those who suffer from it. When Lovato quit her Disney channel show to go to rehab, it was revealed that she had been suffering from eating disorders in order to fit herself into a mold of what she thought everyone wanted her to be. Since putting her Disney days behind her, Lovato has seemed (and looked) much healthier and happier — not to mention remaining open about her issues and recovery in the hopes that her story would help others suffering from the same thing. On Wednesday, Lovato spoke out in defense of eating disorder sufferers, deriding the idea that suffering from the disorder is a choice.

"There's a wide misconception that anorexia and/or bulimia is a choice and you often hear people say things like 'why doesn't she just start eating?' Or even, 'just stop throwing up,'" said Lovato in a series of tweets that began with a shoutout to the Depression and Bipolar Support Alliance (DBSA), a group that apparently showed Lovato the importance of peer support in recovering from mental illness. "It's the ignorance and lack of education on mental illnesses that continues to [put] mental health care on the back burner to Congress, even though this is an epidemic that is sweeping our nation and causing more and more tragedy every day."

It's times like this when I wish life came with an Applause button that I could just push when a celebrity is so on point that words don't even do it justice. Because, as usual, Lovato is on point. Why wouldn't she be? She's actually lived this reality and dealt with the stigma that comes from it. As notable a defender of the underdog Lovato is, the fact that she speaks from personal experience here is what really makes her words so powerful. When it comes to something like mental illness, it's all too easy for people to sound condescending when they talk about it, in that "aw, poor baby," sense that makes it sound more like they're sympathizing or pitying a person suffering from a disorder rather than genuinely empathizing with them.

Lovato genuinely empathizes and that gives her words more credence. Even better, she doesn't just empathize; she makes grand statements like this in order to spread awareness. She calls out instances of insensitivity — such as when Lovato put Disney on blast for an anorexia joke on Shake It Up — and she reaches out to other sufferers to share her story and hope that it helps give them the strength to survive their own. By maintaining an open discourse about eating disorders and mental illnesses, Lovato is creating a safe place for those who might be too ashamed to discuss their body issues and making it clear that it doesn't matter how successful you are or how happy you seem — anyone could be suffering. She truly is a role model for people everywhere.

More like this
Hailey Bieber Has A "Painful" Ovarian Cyst "The Size Of An Apple"
By Radhika Menon
Ashley Benson Revealed The Whole-Body Effects Of Her Anxiety On TikTok
By Stephanie Topacio Long
Keke Palmer Just Announced She's "Going To Be A Mom" On 'SNL'
By Brad Witter
The 'Kenan & Kel' Reunion On 'SNL' Took A Dramatic Turn, Thanks To Keke Palmer
By Brad Witter
Get Even More From Bustle — Sign Up For The Newsletter