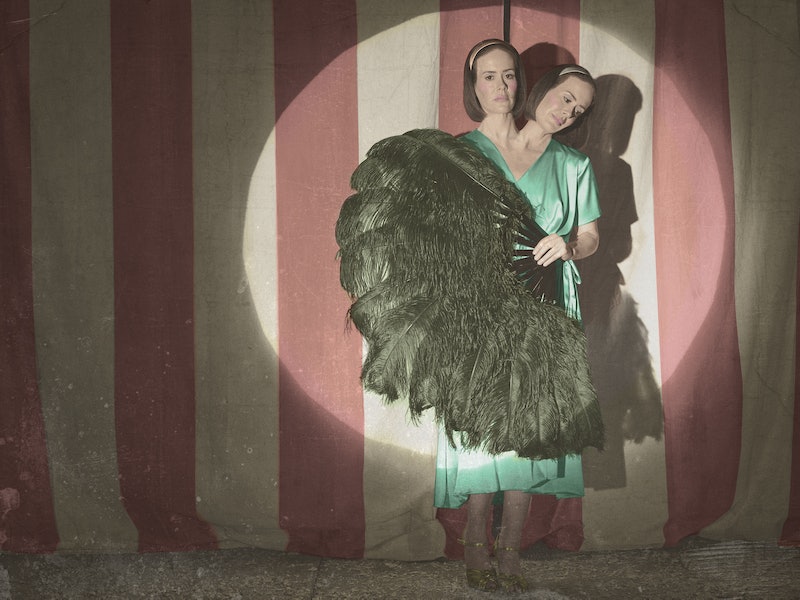 At first I was totally on board. At the conclusion of last week's American Horror Story: Freak Show, "Pink Cupcakes," a jealous Elsa delivered conjoined twins Dot and Bette to Dandy's doorstep as sort of a gift. It was the beginning of a storyline that seemed terrifying. Horrific. And exactly what fans of American Horror Story tune in week in and week out to see. After all, last we had seen Dandy, he was covered in Matt Bomer's blood — surely, the murderous tendencies would rage on, right? (And Asylum only proved that a Sarah Paulson in peril makes for insanely exciting television.) Instead, however, in Thursday night's "Bullseye" episode of AHS: Freak Show, we instead were delivered a Dandy-Dot-Bette love triangle that began and ended faster than you can say "Oh no, please don't make Freak Show look like the second half of Coven."

Shortly after the episode began, we watched Dandy tell his mother, Gloria (who he possibly confirmed having a sexual relationship with?) that he not only was in love with the twins, but that he wanted to marry them. They were, according to him, the only people that made him feel normal, like less than a freak than he was. He wouldn't, as he told his mother, violate them, and wished them only a lifetime of caviar and more waffles than Leslie Knope could eat.

It was unfamiliar territory for those who had spent the last five episodes watching Dandy spiral into a bloody present, but not entirely unwelcome. The introduction of a romance between Dandy, Dot, and Bette could provide plenty of fodder for the FX series. A Dandy who had put his demons behind him? A possible face-off between Dandy and Elsa, the woman who attempted to rob Dot and Bette of their dreams? And, of course, as soon as I discovered that Dot wasn't quite as enamored with Dandy as Bette, I imagined all of the fascinating think pieces that would come out of an AHS discussion of consent when it came to the untraditional love triangle.

Look, as I mentioned above, the idea of Bette and Dot in the same home as a killer is exciting for anyone who Paulson act the hell out of Dr. Thredson's basement in Asylum. And though there is too much violence perpetrated against women on TV and particularly in the American Horror Story franchise (the girl power-laden Coven excepted, of course), whatever Dandy has planned for Bette and Dot will no doubt make for more excitement than we've seen since Briarcliff. But why did the series stall? Why delay the inevitable in order to show Dandy has a heart? And, especially, why set up Dandy as a perfect gentleman, only to allow him to blame a woman's coldness on his desire to murder once again? Oh please, AHS, let's not trod into victim-blaming territory.

Now, this type of treatment is not entirely unfamiliar on television — LOST's creators taught us that stalling is a must to keep viewers invested. But AHS, unlike Dandy, typically doesn't like playing by the rules of television. So what gives?

Either way, I'll say the same thing to you as I did at the end of last week's "Pink Cupcakes," Bette and Dot: God speed.

More like this
‘Bridgerton’ Stars Explained Why Season 2’s Big Wedding Made Them So Emotional
By Stephanie Topacio Long
Selena Gomez’s ‘SNL’ Hosting Debut Had Twitter Gushing Over ‘Barney’ & Wigs
By Stephanie Topacio Long
The Time Traveler’s Wife Book Has A Heartbreaking Ending
By K.W. Colyard
‘SNL’ Referenced Jesse Williams’ Broadway Leak In A Chaotic Theater Sketch
By Grace Wehniainen
Get Even More From Bustle — Sign Up For The Newsletter