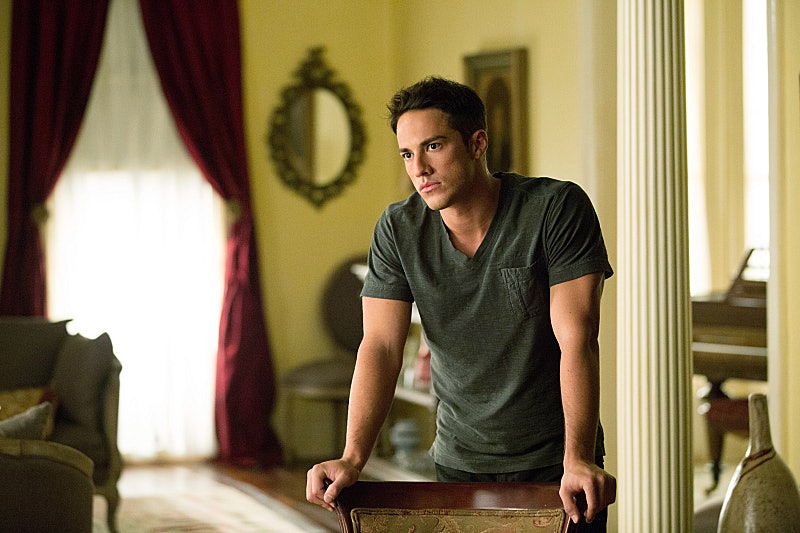 Does anyone really believe that Tyler Lockwood will finish out The Vampire Diaries without turning back into a werewolf? I mean, a few episodes ago, Tyler almost triggered the werewolf gene, like, 20 times over when he drove his car through the homecoming bonfire. Luckily for Tyler, Liv was there to prevent any life-changing changes from happening to the former-werewolf, but he may not be so lucky for long. The synopsis for Thursday's new episode of The Vampire Diaries, "Do You Remember The First Time?" reveals that Tyler and Liv are getting closer on TVD Season 6 and she's got her fair share of baggage.

First, can I just say that it might be a little too much too soon for Tyler to be getting into a relationship with anyone right now. I mean, he's spent the past few years of his life as a werewolf and then as a hybrid, Tyler should probably take some time to settle back into being a human before he starts dating. Especially when he has such a big fear of triggering his family's werewolf gene. You know what's probably not good for someone trying not to trigger their supernatural gene — dating and hormones. But, Tyler's always been his own worst enemy, so who could really be surprised that as soon as he was up walking and talking again, he went after Liv, the Season 5 witch that screwed everything up by letting The Other Side collapse before Damon and Bonnie could get through. (Boooo.)

Tyler has a history of trying to do the noble thing, but he also has a history of giving into his temper. And, that's a recipe for disaster for a guy with werewolf blood in his veins that's just waiting for an excuse to take over. I mean, does anyone remember when Tyler followed Klaus down to New Orleans for essentially NO reason? He just asks for trouble when he can't control his temper and that doesn't bode well for his human future on TVD.

The CW's already released the synopsis for its Thanksgiving-themed episode, "Fade Into You," on Nov. 20. Apparently, Liv is going to open up about her past to good, old Tyler during Elena's "friendsgiving" and what she has to say won't be pretty. Liv is set to reveal some "disturbing" information about her witch lineage and what her coven has planned for her and Luke. And, when push comes to shove, I can't see Tyler taking that laying down. So, what does that have to do with Tyler remaining human in TVD Season 6? Well, definitely not anything good.

Again, Tyler's been a fiercely loyal friend to just about everyone on this series for as long as I can remember. And, now that he's got feelings for Liv and their 'ship is getting serious, that also means he's loyal to her. If TVD Season 6 is going to bring in a conflict with Liv, Luke, and their coven, you can 100 percent count on Tyler being on the front lines to protect his new girlfriend from whatever twisted fate her witchy family has planned for her — even if it means killing someone. Tyler's relationship with Liv could be the driving factor behind him reactivating his werewolf gene. I can't see Tyler thinking twice about killing someone that threatens Liv's life and that's where this relationship becomes dangerous for him.

Obviously Tyler doesn't want to become a werewolf again, especially since he'll no longer be able to control whether or not he turns on the full moon. And, because, even though he can be a huge jerk sometimes, Tyler's a decent guy and he's not going to leave you hanging when you're in trouble. Things are just starting to get serious between Liv and Tyler, but she's already killed for him — it's only a matter of time before he returns the favor.

More like this
The Good Doctor Already Added 2 New Cast Members For Season 6
By Brad Witter
Will Viewers Revisit Welcome To Eden For Season 2? What To Know
By Kadin Burnett
Everything To Know About Marvel's 'Echo' Series On Disney+
By Grace Wehniainen
Will Vampire In The Garden Get A Season 2? What To Know
By Kadin Burnett
Get Even More From Bustle — Sign Up For The Newsletter