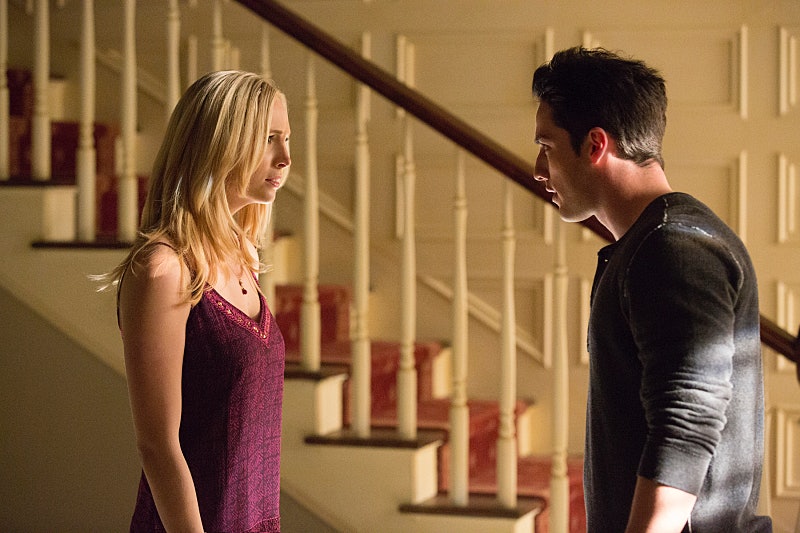 If you were a big supporter of Caroline and Tyler's relationship, then chances are you're not going to be thrilled when you see the latest clip from The Vampire Diaries ' upcoming sixth season. The promo shows a very handsome looking Alaric, who seems to be settling in nicely with his new job as a college professor. That is, if only a certain ex-hybrid would stop barging in late to his class. That's right, ladies and gents — Tyler Lockwood has finally decided to attend college and is already failing in the punctuality department. However, things take a rather interesting turn when he sits down right next to Liv. And while the two of them don't really say much, the sarcastic (and slightly sexual) tension between them speaks volumes. Clearly, something is going to become of this, whether it be a full-blown relationship or a one-time hook-up. But either option is definitely being hinted at, which means yet another blow for Tyler and Caroline 'shippers.

I mean, it's not as if they were anywhere close to reaching a reconciliation, but this possible love interest for Tyler coupled with all the Steroline/Calenzo/Klaroline rumors floating around just further confirms what we already knew — Caroline and Tyler are done… for good this time. I guess that means she's just going to have to go seek steamy hybrid sex elsewhere. (*cough* Klaus *cough*)

But what makes Tyler's potential interest in Liv (and vice-versa) all the more complicated is the fact that recent Season 6 premiere photos show Tyler physically choking her twin witch brother, Luke. And while it's unclear what exactly invoked such rage, I'm guessing it's something Liv's not going to be too thrilled with. (I don't have any siblings, personally, but from what I gather, behavior like that has got to be a deal breaker, no?)

Either way, I'm extremely intrigued to find out where this all leads. Plus, who am I to question the 'shipping genius of Julie Plec, who has given us so much throughout the years. (Delena anyone?) Check out the clip and see the undeniable chemistry below. And if you happen to find a way to sign up for Alaric's class, be sure to let me know.