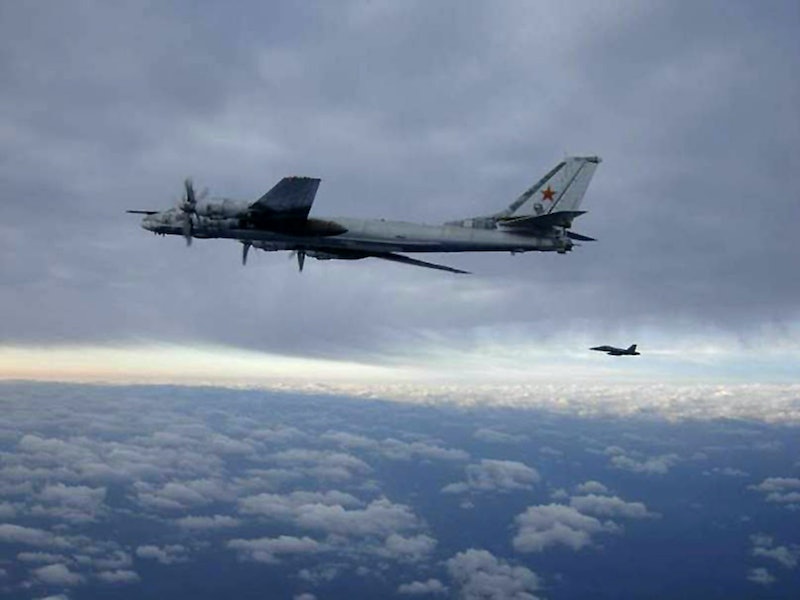 Is it the Cold War all over again? Russia seems to be on a "Let's Push NATO's Buttons" kick, and it's doing so with abandon. The same day that NATO authorities announced that it had seen Russian military equipment, tanks, and combat troops moving into to eastern Ukraine — a clear sign of Russia's other favorite game, "Let's Continue to Violate the Minsk Agreement" — Russia announced it was sending bomber flights near the U.S. to fly over the Caribbean and the Gulf of Mexico. The move, says Russia's defense minister, is for patrol purposes and is a response to the growing international condemnation over Ukraine. And who is responsible for that current Ukrainian crisis? Nice try, Russia, but you're starting to reveal your long game.

Immediately after NATO Secretary-General Jens Stoltenberg made a statement about the Russian convoys moving into Ukraine, calling the move a "severe threat to the ceasefire," Russian Defense Minister Sergei Shoigu fired back with Russia's own announcement on the bomber flights — as if it had been waiting to spring the plan into action. Shoigu said in a statement:

In the current situation we have to maintain military presence in the western Atlantic and eastern Pacific, as well as the Caribbean and the Gulf of Mexico. Due to that, as part of the drills, Russian long-range bombers will conduct flights along Russian borders and over the Arctic Ocean.... In many respects, this is connected with the situation in Ukraine, with fomentation of anti-Russian moods on the part of NATO and reinforcement of foreign military presence next to our border.

By "the current situation," he means the ever-escalating tension brewing among NATO members over the situation in Ukraine. So, in other words, because the world is standing up to its bullying, Russia has to flex its muscles even more out of "protection."

What the Bomber Missions Will Entail

Though Shoigu remained vague on the specifics of the patrol missions, like when and how frequently they will occur, he said that the long-range bomber planes from Russia's air force will perform "reconnaissance missions to monitor foreign powers' military activities and maritime communications."

Pentagon spokesman Colonel Steve Warren commented in response that Russia has the right to conduct such patrol missions, as all nations are permitted to operate in international airspace and in international waters.

How It's Reminiscent of the Cold War

The last time Russia sent bomber patrol planes across the Atlantic and Pacific was during the Cold War, when nuclear-capable strategic bomber planes made regular trips near the U.S. maritime borders. During that time, the planes reached areas from which the nuclear cruise missiles could be launched into the U.S.

In recent months, the number of hostile incidents between Russia and NATO countries have increased significantly. The European Leadership Network started compiling these confrontations in an analysis report titled "Dangerous Brinkmanship: Close Military Encounters Between Russia and the West in 2014." Examples of these encounters include the September incident in which the U.S. intercepted six Russian planes, including fighter jets, near Alaskan airspace. Similarly, in October, Royal Air Force jets intercepted Russian planes that were nearing British airspace. In fact, NATO has reported intercepting Russian aircraft along European borders 100 times in 2014, which is about three times more than the number of incidents in 2013.

More like this
Taylor Swift, Kerry Washington & More Speak Out On Uvalde Mass Shooting
By Jake Viswanath
Photos Of Boris Johnson Drinking At A Downing Street Lockdown Party Have Surfaced
By Bustle UK
How To Support Gun Control Reform Right Now
By Morgan Brinlee and Carolyn Steber
Jake Daniels Just Became The UK’s First Active Football Player To Come Out As Gay Since 1990
By Sam Ramsden
Get Even More From Bustle — Sign Up For The Newsletter