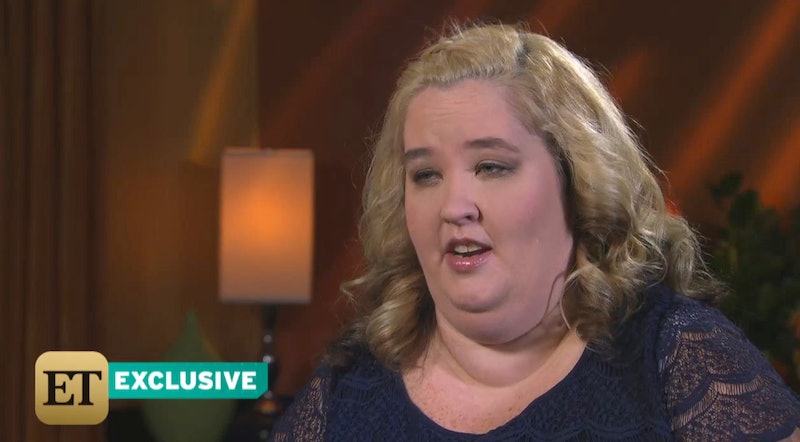 Didn't think the Here Comes Honey Boo Boo sex offender scandal could get any worse? Well sadly, it just did. In a new interview with Entertainment Tonight, Mama June Shannon admitted that she's dated a second sex offender and he's the one who is 14-year-old Lauryn "Pumpkin" Thompson's dad, not Mark McDaniel. "Jessica and Pumpkin have the same dad, but Jessica's dad has had nothing to do with her over the years," Mama June says in the interview. "So, why the hell would I open up that can of worms until today? I lied to my family and told them it was somebody else."

Seventeen-year-old Jessica "Chubbs" Thompson's father is Michael Anthony Ford, who "served more than two years in prison for the sexual exploitation of a child over the Internet." That was in 2005, when his daughters Jessica and Lauryn were just eight and five years old themselves, which makes things even more horrifying.

But because Lauryn never knew that she and Jessica shared a father, she started looking at the other men Mama June had dated for answers. Oldest daughter Anna Cardwell reported that Lauryn suspected Mark McDaniel was her father. "Pumpkin thinks it’s Mark which kind of hurts my feelings, because Mama is making her believe that someone who did that to me is her father," Cardwell said in a recent interview.

Mama June is now saying that Lauryn's questions about her paternity is why she met with McDaniel in the first place. "Since two months to almost six years, she knew nobody but him," Shannon admitted. "She was starting to resent Anna and she was starting to ask me questions. I can't answer those questions for Pumpkin." So Mama June took her family to meet him and get some closure for her daughter.

I was sitting right there with twelve other people. It was a conversation that she wanted answers to: what happened, why did he leave, if he was her real father. He admitted to her, "No." [And] I had already told her that but, you know, she wanted to hear from both sides of the story ... I wanted to be able to give one of my other daughters closure and now Pumpkin is happy, that piece of our life is over.

When this news of the TLC matriarch allegedly dating a child molester first broke I wanted to believe the best in the situation. I wanted to think that she wouldn't put her children in danger and the rumors must be false because she loves her kids. I didn't think she would ever intentionally put them in harm's way. But she has, and she's lying about it, and making excuses and it's getting to be ridiculous now. Whether or not that story about Lauryn needing closure is true doesn't matter, because we all know it wasn't just the one time that Mama June spent time with him. She's been spotted house shopping, car shopping, and even hanging out with just him and her 9-year-old daughter Alana "Honey Boo Boo" Thompson.

Knowing now that Mama June has a history of dating sex offenders, I'm extremely disappointed with her cavalier attitude about the situation. Lauyrn is now 14, there is no reason why she should resent her older sister for McDaniel not being allowed to come around. Her mother should have sat her down and explained what happened, because I'm sure if Lauryn knew, she'd feel compassion instead of anger. But apparently the idea never occurred to Mama June who said, "I can't answer those questions [about McDaniel] for Pumpkin." Um, yes you can. That's your job as a mother to talk about the hard stuff sometimes, especially if it's affecting your daughter's relationship with each other because Lauryn didn't have the full story.

But likely one of the things stopping Mama June from talking about this subject is that she doesn't actually know everything that happened. She never read the court documents that detailed Anna Cardwell's abuse. "You would be horrified if you read the details of what she said he did to her," ET's reporter Brooke Anderson informed her. "I've told Anna not to bring up the past," Mama June responded.

It's so frustrating because it's so clear that her mother doesn't get it. I know that reading the court documents would be hard, but how else are you supposed to help your daughter heal if you don't know what she went through? And you don't tell the victim to shut up about it and keep it in the past. Just because it happened 12 years ago doesn't mean that seeing this man in her mother's life again wouldn't upset her. But of course Mama June wasn't thinking about her daughter's feelings considering Cardwell admitted her mother didn't even believe her at first. "[Mama] would say, ‘Why would you do that to me?’”

I've lost all respect for Mama June, and to be honest, I'm not sure how much we can trust what's coming out of her mouth. But she's not even close to done talking. The first part of her Entertainment Tonight interview airs Thursday night and there will be more lies and frustrating comments to come, I'm sure.