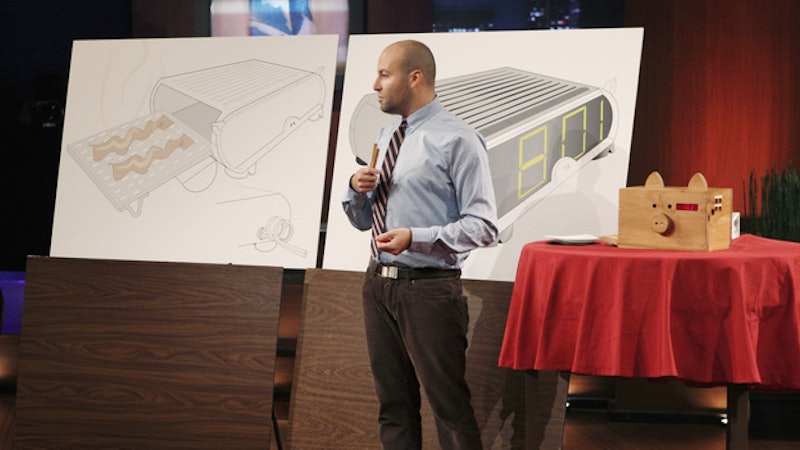 Picture this: rather than a sudden, squawking alarm waking you abruptly every morning, you are instead gradually roused from sleep over a period of several minutes by the savory, delicious scent of bacon slowly wafting through your room. That was the idea behind the Wake 'n Bacon—a product Shark Tank rejected, unfortunately, back in Season 2. How five of the greatest business minds of our time could miss out on a chance to invest in this wonder product I'll never understand. Sure, they had safety concerns like, is it a good idea to keep cooking equipment in your bedroom?, and wouldn't the bacon go bad overnight?, but these seem like small risks to take in the face of such an exciting development in alarm clock technology.

Sadly, the Wake 'n Bacon is no longer in production or being sold, as far as I could tell after a thorough search of the entire Internet. But inventor Matty Sallin's genius should still be recognized. His wooden, pig-shaped alarm clock included a slide-out warming tray. Simply place a piece of pre-cooked bacon on the tray the night before, and 10 minutes before your alarm goes off, the clock would automatically start warming your bacon, so that you could begin the day with a yummy breakfast snack.

Again, this seems like an easy sell. But none of the Sharks went for it, and for that they'll forever be remembered as the people who stood in the way of true innovation. For the last few years, bacon has been having a real moment in the spotlight. You can find it in recipes for jam, truffles, string beans, pancakes — I even found a recipe for bacon-wrapped bananas. With pork products so much in demand, I went on a search for other gadgets and gimmicks that incorporate a little pig into your daily routine.

Sometimes you just get tired of smelling fresh and clean after a shower. Maybe you'd rather give off the scent of your favorite meat instead. If you've ever felt like this, Bacon Body Wash is for you. Just don't get near any wild animals (or particularly strong-nosed humans) once you've tried it out.

What is Beard Oil you ask? I don't have a beard, so I don't know. Is it some secret substance men drizzle over their facial hair to keep it soft and luxurious? Is like fertilizer for your chin scruff to make it grow faster? Is it just vegetable oil in a fancy jar? Who can say. All I know is that beard oil is something burly, bearded men rub on their beards to keep them burly. And it comes in a bacon-scented variety.

If only I had known this existed in time for my high school prom. I would have ditched my one-shoulder black minidress (which I looked bangin' in, by the way) for this fashion statement in a second. But wait: it goes even further. McPhee sells a puzzle made out of this picture. You could take even more time to admire the majesty of bacon as you spend hours and hours piecing together this very picture. Dreams really do come true.