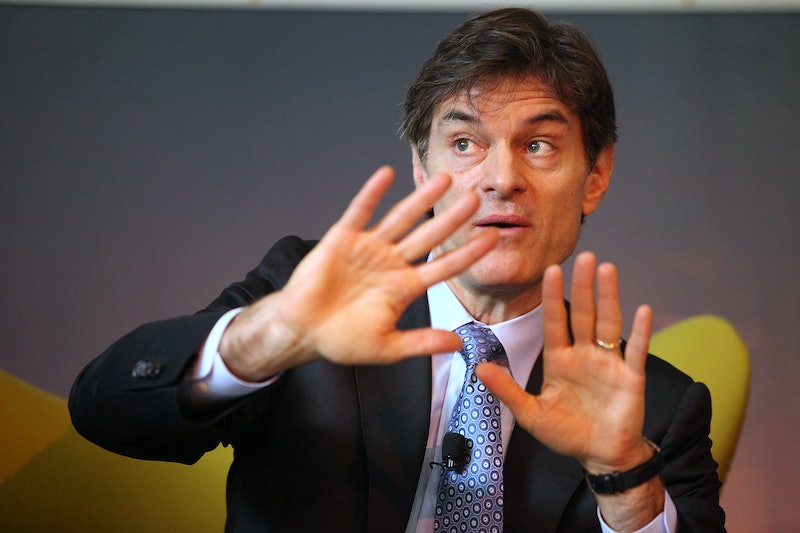 Well, that didn't go as planned. On Tuesday, America's most panned TV doctor, Dr. Oz, conducted a Twitter Q&A session asking fans to submit their health questions to him with the hashtag #OzsInbox. He promised to answer his favorite ones on his website, DoctorOz.com. Instead of generating serious medical questions, however, the #OzsInbox hashtag took off in an unexpected direction, bringing in floods of inquiries that sought not the good doctor's medical advice, but his head. Twitter users took advantage of the Q&A to vent their anger over Dr. Oz's misleading, scientifically unsound health advice, for which he has built a solid reputation over the years.

It's almost hard to believe that Dr. Oz was once a promising — and legit — medical professional. After obtaining degrees from Harvard, the University of Pennsylvania School of Medicine, and UPenn's prestigious Wharton business school, Dr. Oz became a cardiothoracic surgeon and director of the Cardiovascular Institute and Complementary Medicine Program at NewYork-Presbyterian Hospital. But that's certainly not what people think of when they think Dr. Oz. The first images that pop into their minds are likely green coffee extract, raspberry ketone pills, and a television studio.

After recommending a slew of "miracle "dietary supplements and weight-loss pills, including the aforementioned, Dr. Oz has received backlash from the American public and was even given the Pigasus Award, which seeks to expose fraudulent figures in fields like science, medicine, and media. This June, Dr. Oz received the most serious backlash of his career thus far in the form of a Senate hearing led by Sen. Claire McCaskill, chairwoman of the Subcommittee on Consumer Protection, Product Safety and Insurance. The hearing examined his promotion of so-called weight-loss products on his show and the lack of scientific evidence that backed his claims.

And now the Twitterverse has turned on him as well. Though it wasn't pretty, it was often funny. Here are some of the best "questions" from Dr. Oz's Twitter Q&A gone terribly wrong.