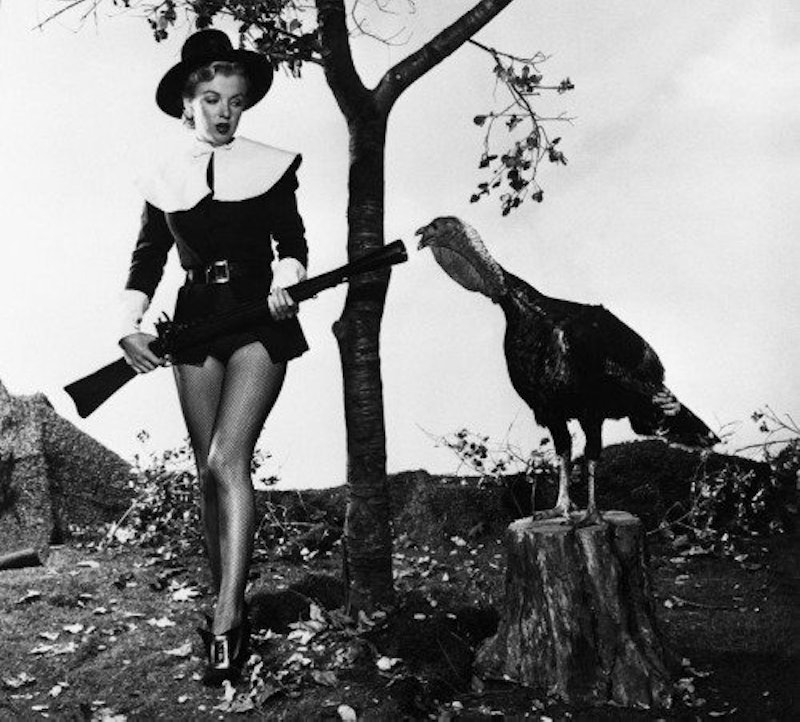 Are you finding that your family's modern Thanksgiving dinner is not traditional enough? Too many foods that actually taste good? Too much gender parity? Too fun? Well, then this year, you might want to consider having ... a 1950s Thanksgiving dinner! It's good for what ails ya! (if "what ails ya" is greater awareness of racism and sexism, that is).

While the 1950s had enviable interior design and some really cute women's clothing, it was, in general, a crappy decade for almost everyone — from the straight white men who were expected to repress their emotions and work themselves senseless to support their families, to the straight white women expected to have no ambitions outside being a homemaker, to anyone who was not straight and white, who had to deal with constant degrading treatment and basically having no rights in the eyes of the law. And the post-war decade's Thanksgiving celebrations were a microcosm of the era's trends and social problems — unthinking sexism and racism, emotional repression, and Jell-O based food-stuffs.

That doesn't mean that parts of 1950s Thanksgiving celebrations weren't campy and adorable, of course — I mean, Marilyn Monroe dressed as a pilgrim? How precious!

If you'd like to learn more about a difficult and confusing period in our nation's history, read on for our guide to how to do your Thanksgiving — 1950s style. However, unlike Marilyn, you should probably plan on wearing pants.

DRESS UP YOUR TURKEY

Turkey has always been the star of the Thanksgiving show, so that element of 1950s Thanksgiving will feel familiar to today's Thanksgving diners. But the turkeys themselves have changed — before the advent of modern growth hormones and antibiotics, Thanksgiving turkeys were much smaller than our modern birds. They were also much less processed, and apparently still sometimes had lungs and "oil sacks" that needed to be removed by the lady of the house before cooking. In the early '50s, there was also still some debate about the best way to prep a turkey — a team of researchers at Duke University in determined that the most efficient way to cook a turkey with the least shrinkage was by roasting, not frying.

But just because the way that we prepare a turkey has remained fairly static, doesn't mean that the way we present a turkey has. According to a 1950s edition of the Better Homes and Gardens Holiday Cookbook, an easy way to make your turkey more festive was by garnishing your turkey with decorative chrysanthemums. Where do you get these chrysanthemums? Why, you can just "[s]nip some from your living room bouquet." I mean, DUH.

LET THE WOMEN COOK, AND THE MEN CUT

A lot of Thanksgiving prep is still pretty sexist, with women still doing the bulk of the cooking work — but I challenge you to find a single shot of 1950s Thanksgiving that shows a man cooking anything. But why was carving considered a lofty, masculine pursuit at the time, one that could only be properly done by the man of the house? Every 1950s Thanksgiving film and photo shows a man carving the turkey, and as late as 1990, The New York Times featured a bizarre trend piece about the secret shame of men who were not good at cutting turkeys. Luckily for us modern ladies, this tradition seems to have gone the way of the fried turkey — our reproductive rights may constantly be under attack, but goddamn it, at least women can carve a turkey now!

CHEW WITH YOUR MOUTH CLOSED (AT LEAST WHEN THE CAMERA'S ON)

I, personally, refuse to eat any meal inside my own home while wearing pants. But I do understand that, theoretically, any fancy meal, like Thanksgiving, should be accompanied by fancy manners. This instructional film about Thanksgiving manners for children (produced by Instructional Films Inc, natch) makes me wonder the same about 1950s families — sure, they should have avoided soup slurping and made sure to have napkins in their laps on Thanksgiving, but did they? How did people's actual manners stack up at real 1950s Thanksgiving dinners? We'll never know. (Unless we talk to someone who was around in the 1950s. And frankly, people, my pantsless-eating schedule is just too busy for that.)

SAVE ROOM FOR JELL-O

Despite the running predominance of turkey, there were a few ways that 1950s Thanksgiving tables didn't look like ours. To begin with: there was a hell of a lot of Jell-O on it. The post-World War II boom in public enthusiasm for both pre-packaged food and anything that promised "better living through science" collided in Jell-O based food recipes, which were everywhere in the 1950s, and were pretty uniformly nauseating.

Your 1950s Thanksgiving dinner table might have been covered in plates of Lime Jell-O Fluff Salad, and Jell-O with Shrimp Frosting alongside your turkey and potatoes. Jell-O was a convenient cooking base because it kept whatever foods you trapped inside it edible for longer than they'd be on their own (according to Ruth Clark, the blogger behind The Mid-Century Menu, "I’ve found that food mixed into Jell-O stays fresher much longer than if you have it by itself"), but unfortunately, that fresh food remains extremely gross.

Also on mid-century Thanksgiving tables: a few seafood dishes, like oyster cocktails, items based around a novel use of a standard foodstuff like mayonnaise, and a few other foods that we pretty much agreed as a culture to stop eating, like mincemeat.

The Macy's Thanksgiving Day Parade has been in business every Thanksgiving Day since 1924, and introduced balloons in 1927 (the first was Felix the Cat). However, even after a few decades of balloon creatures, there was still a little work to be done on not making the balloons look like monsters who lived in your basement and wanted to suck out your soul through your ear holes for Thanksgiving dinner (possibly with a side of Jell-O with Shrimp Frosting).

Okay, this actually looks like it's a lot more fun than the modern Macy's Thanksgiving Day parade, if only because things don't stop every five minutes to allow some guy who came in 4th place on The Voice to sing some horrible power ballad.

WATCH THIS THANKSGIVING SPECIAL PERFORMED BY RACIST PUPPETS — or better yet, don't

Rootie Kazootie was a 1950s children's TV show that ran from 1950 to 1954, one that featured hand puppets and live actors joining forces to sing songs, perform skits, and, based on this special, act in an incredibly offensive and racist way about Native Americans.

This racism is, sadly, another key element of 1950s Thanksgiving —in the decades before the Civil Rights movement, the American Indian Movement, and other things that made white Americans more aware of the histories and cultures of people of color, Thanksgiving was basically a racist shit-show, where Native Americans were considered "savages" in the Thanksgiving story, wearing feathered head-dresses and participating in fake Native American "dances" was considered clever. Though honestly, we're not exactly doing that much better on the Thanksgiving racism situation these days, either.

PUT A CORNUCOPIA ON THE TABLE ... and on your butt

Though 1950s holiday decorating never quite made it to the "hollow out a gourd and turn it into a candle holder" level of madness that Martha Stewart and co. advocate for, a mid-century housewife was expected set up a thematically decorated home for the holiday, which often include special holiday-print table cloths and plates, turkey-shaped place cards, and, yes, a big-ass wicker cornucopia in the center of the table.

Ladies looking to take it to the next level could also throw on some Thanksgiving-themed formal ware, like this cornucopia-print skirt.

This skirt, like all '50s skirts, was created to be worn with petticoats and an industrial-strength girdle. How well did that pair with consuming fistfuls of stuffing and a bucket of shrimp Jell-O? I don't know, but I am very, very, very glad that the '50s are over and I never have to find out.