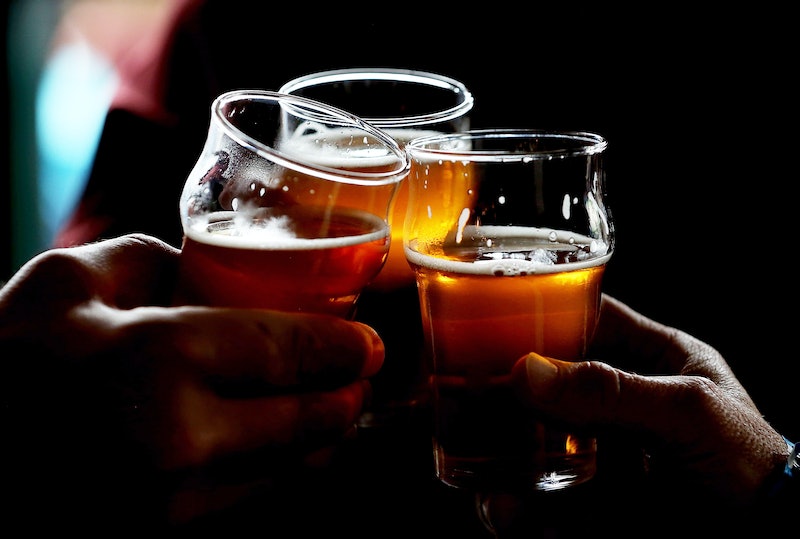 By now, you’re probably used to the fact that most of the boozy drinks you consume don’t come with a neatly organized chart of nutritional facts plastered to the side of it — but why is that? Why don’t alcoholic beverages have nutrition labels? Given that bottled water is required to have them, it’s a little odd, right? Well, Vox has the answers, and it’s a lot more complicated than you probably think it is.

Vox’s Joseph Stromberg published a pretty comprehensive story this week covering not only the history of alcohol regulation in the U.S., but more specifically, why alcoholic beverages still don’t have labels here. The short version is this: Alcoholic beverages aren’t regulated by the U.S. Food and Drug Administration, so they’re not required to disclose their nutritional information to you.

I’ve boiled down four of the salient points below (illustrated with some of my favorite GIFs, because nothing goes together like booze and cats), but I highly recommend heading over to Vox for the whole thing. It’s a lengthy read, but if you don’t have time for it now, bookmark it and save it for later. Trust me. You’re going to want the details. Oh, and if you’re curious about where you can go to find the nutritional — and specifically calorie — information for just about any type of booze you can think of, First We First recommends Get Drunk Not Fat. Because, as The Atlantic pointed out in 2013, skipping meals in order to consume more alcohol calories later is a terrible idea.

1. Government Regulation of Alcohol Is Handled by the Alcohol and Tobacco Tax and Trade Bureau

Although you’d think that the FDA would be in charge of any and all edible and drinkable foodstuffs on the market, it’s actually not. The TTB was created after Prohibition ended, when congress passed the Alcohol Administration Act. According to Vox, the agency’s primary purpose was to generate tax revenue from alcohol now that it was legal (because monies); it was also made responsible for the regulation of labels on boozy beverages.

2. The Rules the TTB Have Created in the Decades Since Its Inception Are Really Weird

Vox calls them a “hodgepodge,” which sounds about right. Apparently different kinds of liquor have different rules — for example, the hard stuff has to indicate its alcohol percentage, as do bottles of wine containing more than 14 percent alcohol; wines with less than 14 percent alcohol and all beers, however, don’t. Oh, and actual ingredients are optional unless they pose an allergy threat. See? Weird.

3. Efforts to Convince the Government to Require Nutritional Labels for Alcohol Have Failed Repeatedly

Those seeking the labels are usually consumer advocate groups, and those thwarting them are usually (although not always) alcohol manufacturers. According to Vox, the battle has played out at least six different times since the ‘70s. The latest rule, issued in May of 2013, keeps labeling optional, but now permits labels, if used, to display serving size, alcohol content, and servings per container.

4. Money (Probably) Has (Almost) Everything to Do With It

Although calorie and other nutritional information for most alcoholic drinks can be found online, let’s face it: Most of us can’t be bothered to Google how many calories are in our Blue Moon before we drink it. If such information was readily available, though, it would probably change both our drinking and our buying habits. Vox points to a study conducted by Johns Hopkins public health researcher Sara Bleich that found the labeling on soda affects how we consume it; Bleich also told Vox that she suspects the effect would be similar with regards to alcohol labels. More conscientious drinkers probably equals fewer sales in the long run.