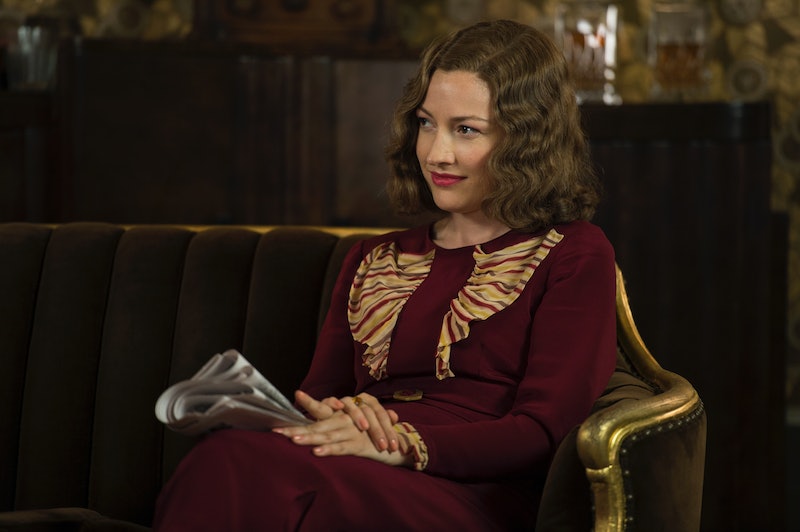 Leave it up to Boardwalk Empire to not even be able to see what Nucky Thompson sees in women. Last Sunday, the HBO series drove Margaret back to Nucky for help when Mrs. Rothstein threatened to sue her for missing funds in her deceased husband's account. And it was frustrating, considering we'd seen Margaret hold her own and negotiate with Rothstein in Season 4 and Boardwalk Empire 's Season 5 premiere seemed to favor its women. But on Sunday night, it got even worse when Nucky acknowledged how intelligent and self-sufficient his wife was, but the series still reduced Margaret to being a yearning estranged spouse.

It was a step backwards in Margaret's storyline to have her need to return to Atlantic City to ask Nucky to help her pay off Mrs. Rothstein. Especially after she held a job, bartered with a notorious gangster to get what she wanted, and raised children all on her own without Nucky's money. But on Sunday night, Boardwalk Empire took it a big step further when it got Margaret drunk, made her kiss Nucky, and then had her look dejected when he put her up in a hotel, rather than inviting her back to his apartment. And it was the absolute worst possible thing to do to Margaret as a character.

This moment of what Boardwalk probably thinks is "feminine weakness" happened immediately after Nucky basically told Margaret that he was proud of her and marked her as his equal — as if she really needed his approval. When Nucky told her his plan to have Mrs. Rothstein take 25 cents on the dollar for the money she wanted from them, Margaret asked how he was going to do it and he told her that he wasn't doing anything, she was. Nucky was fully prepared to trust Margaret with something as sensitive as having Rothstein's wife drag his name through the papers if it went wrong. And that says a lot about how Nucky's view of her and women in general has changed since Season 1.

So why would this series, which seemed to be finally treating women right in its final season, throw Margaret so far under the conventional, archaic, and ignorant bus of "women are too emotional" and "men and women can't be friends." I mean, Nucky proved to be emotional and jealous when he stuck claim to Margaret earlier on in the episode and refused to let her ride back to NYC with his former potential business partner. Was this a way of making sure Nucky didn't seem more vulnerable than Margaret?

There's clearly a problem when the series' protagonist recognizes how strong this woman in life is, but the series itself just can't think outside the box. It's obvious that Margaret is better and more confident than this and she's going to need to be if she has to set up this deal with Mrs. Rothstein. So why couldn't Boardwalk just let her have her independence and her strength? Clearly this HBO series has learned nothing about how to treat its women, even though it seemed start off in the right direction in the Season 5 premiere. Shame on you, HBO.