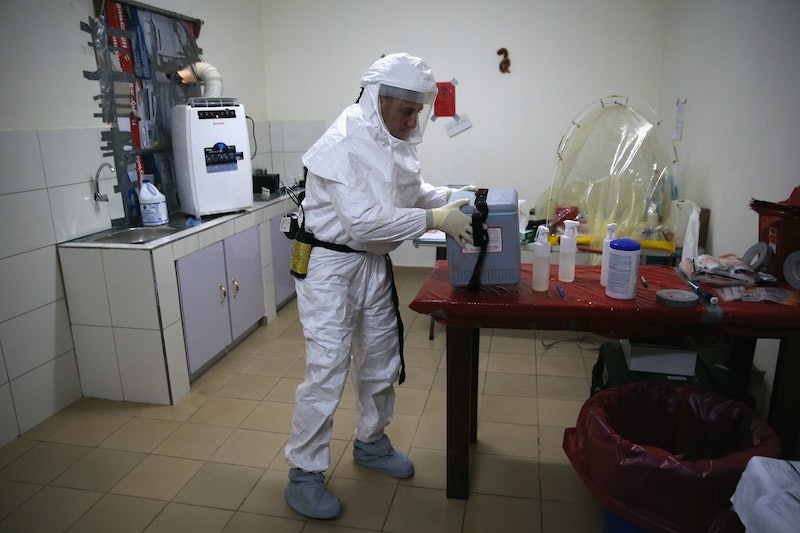 The Ebola outbreak in West Africa has been raging for so long, it was starting to feel like a permanent part of reality. Luckily, that might not be the case for much longer, as Doctors Without Borders begin clinical trials of Ebola treatments in West Africa starting in December. The health organization will test three experimental therapies that had all been administered to U.S. and European Ebola patients, the majority of which survived. These treatments include antiviral drugs brincidofovir and favipiravir and blood transfusions from Ebola survivors. If successful and mass-produced, these treatments could be the key to curbing the outbreak that has affected more than 14,000 and killed more than 5,000 people thus far.

Doctors Without Borders/Médecins Sans Frontières (MSF) is conducting the trials in cooperation with the World Health Organization, the University of Oxford, the Wellcome Trust, the French National Institute of Health and Medical Research, pharmaceutical companies, and other health organizations. The studies will take place at MSF's treatment facilities in Liberia and Guinea.

The trials will be unprecedented; the pressure of the epidemic requires them to bypass the normal protocol, which involves testing the drugs on animals and healthy humans before giving it to the infected. But with the 70 percent fatality rate and widespread nature of the Ebola virus, authorities are giving the trials the green light, hoping that the therapies will be able to significantly slash that death rate. The tests will see if more patients survive after being given these treatments over a two-week period; if patients continue to die at the same rate or at a higher rate, their particular drug will be discontinued immediately. After trials begin next month, health officials expect to have confirmation of the treatments' effectiveness by February.

Get to know the treatments that could be the answer to ending the Ebola outbreak.

A team of scientists from Oxford will test brincidofovir, an antiviral drug made by biopharmaceutical company Chimerix in Durham, North Carolina. It was shown to have an combative effect against the Ebola virus in lab tests, slowing down the virus' ability to multiply, but it hasn't been tested on Ebola-infected animals yet. However, scientists believe it will be safe to use in humans based on trials against other viruses. Up to 140 patients will take the drug twice a week over a two-week period.

The French National Institute of Health and Medical Research (Inserm) will head the trial of the second antiviral drug, favipiravir, in Guéckédou, Guinea. That drug was developed by Toyama Chemical of Japan to fight influenza. In February, researchers published study results that found the drug successfully combating advanced Ebola infection in small rodents.

Also in Guinea, the Antwerp Institute of Tropical Medicine (ITM) will lead a trial testing the effect of giving Ebola patients the blood and plasma of survivors, which contains antibodies. This treatment was used on Dr. Kent Brantly, who then paid it forward by donating his blood to health worker Richard Sacra, cameraman Ashoka Mukpo, and nurses Nina Pham and Amber Vinson. They have all survived. It is believed that the antibodies in survivors' blood, which where able to successfully fight off the Ebola virus, will do the same for the infected and help boost their immune system.