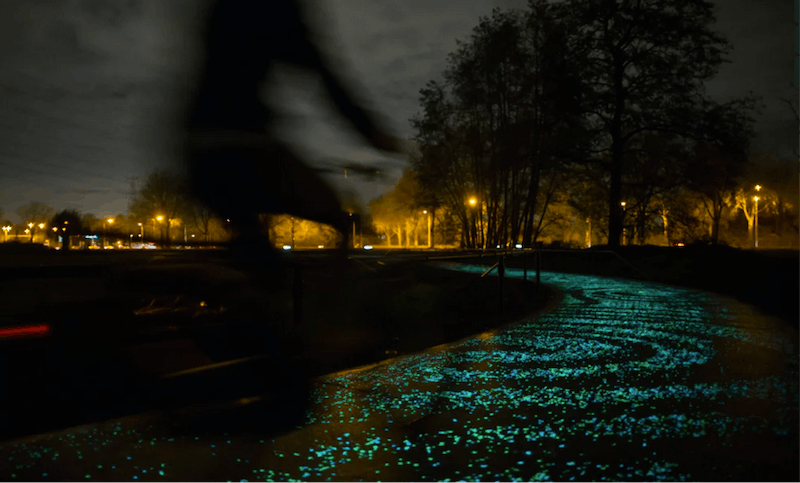 In the words of the all-knowing Liz Lemon, I want to go to there. The Netherlands have just finished creating the first solar-powered bike path, and looking at it is the stuff of dreams. During the day, it charges itself using the heat of the sun. Once it gets dark outside, the stones on the path light up and create a strikingly beautiful pattern of fragmented pieces in the concrete inspired by Van Gogh's "Starry Night." The glow is so mesmerizing that it looks like something straight out of a science fiction novel. I'm pretty sure I'm going to get married there, and possibly never leave.

Not only are the lights enchanting, but they're a huge step toward creating more environmentally-friendly power sources. The bike path generates enough power to run two or three homes, and while it is presently not very cost-effective, it does pave the way for the idea of solar-powered roadways. Obviously those would have to be significantly less pretty or people like me would just gape at them and start accidentally playing bumper cars on major roadways. Beautiful traffic hazards aside, there is potentially significant environmental impact associated with this kind of technology. And with solar power taking off and the materials becoming steadily less expensive, experts from the engineering firm TNO that spearheaded this project predict that paths like these will become mainstream and profitable in the next 10 years. Yaaaaay, pretty, earth-friendly paths for everyone!

So if anybody needs me, I'm going to be in a cocoon for the next decade so I can just casually wake up in a world where my early morning bike rides are lit up by fragmented interpretations of famous artists. Also I'm moving to the Netherlands. Once you see the twinkling lights on this winding bike path, I dare you not to join me: