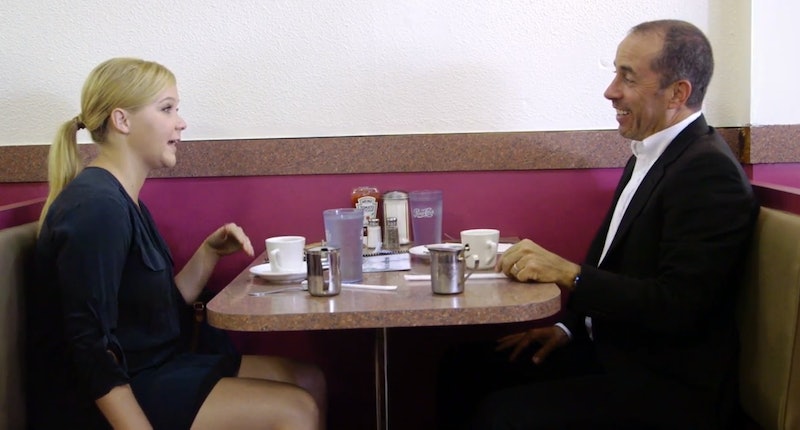 I don't know exactly what I expected from Amy Schumer's appearance on Jerry Seinfeld's show Comedians in Cars Getting Coffee. I expected them to get coffee and at some point be in a car, sure, and I suppose I expected them to say some funny things and discuss their work and their lives. What I didn't really expect, though, is for the resident car of the episode to try to kill them both and then for Seinfeld to dive into a discussion of wacked-out female beauty standards in a way that almost has me forgetting about his balking at diversity last February.

As is this show's way, the first few minutes of this episode focuses on a car that Seinfeld is really super into. Unfortunately for him and for passenger Schumer, that car starts spewing smoke pretty immediately — though that does facilitate some quality time of watching Schumer laugh at Seinfeld on the side of a highway.

Where things get into some good nitty-gritty, though, is when the pair make their way to a nearby diner and actually start chatting.

"American women's concept of 'How I need to look to look good' is too narrow," Seinfeld says.

This is, it must be said, pretty damn mansplainy; I don't really need Jerry Seinfeld telling me I've got my priorities out of whack when I don't really trust that he's the person who's got his finger on the modern pulse of American womanhood. But they keep it going: "But what's sexy?" Schumer interjects. "Exactly!" said Seinfeld. "A lot of things. Any rejection of artifice is appealing."

Hmm. I'm not going to immediately parse every bit of Seinfeld's attempts to engage Schumer in feminist issues — he seems to think Parisian women have it all figured out? But their back-and-forth is an interesting mix of their usual comedian schticks ("what about those women's self-esteem, eh?") and general chatter about coming of age and life. And hey, Schumer is just as hilarious as she always is, and it's making me wish I were right there at that table having these conversations with them.

Image: Comedians In Cars Getting Coffee

More like this
Amy Schumer Is Actually The Other Kardashian Sister You Never Knew About
By Jake Viswanath
Sandra Bullock, Girlboss Extraordinaire
By Matt Harkins & Viviana Olen
Spice Girls’ Net Worth: The Richest Member Is Wealthier Than The Rest Combined
By Hugh McIntyre
Penn Badgley & Leighton Meester Met On A Horror Movie Set Before 'Gossip Girl'
By Jake Viswanath
Get Even More From Bustle — Sign Up For The Newsletter