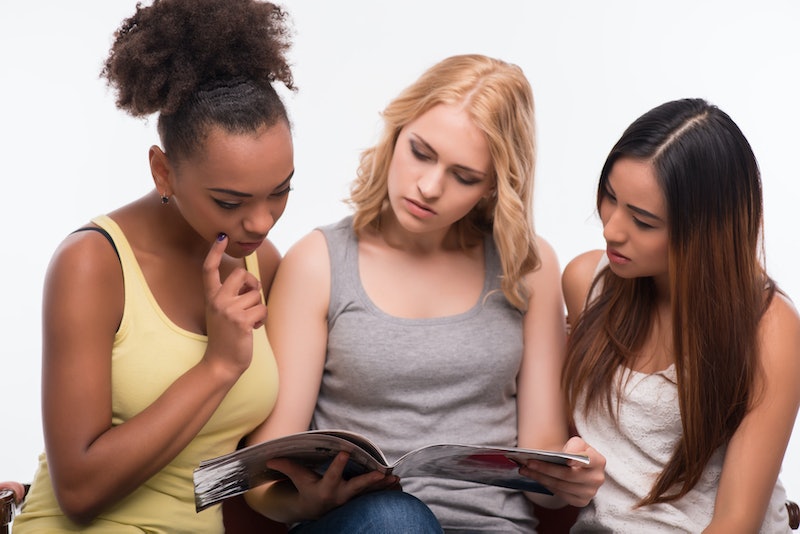 Have you ever wondered why, despite repeated efforts at driving home the fact that the glossy photoshopped bodies and faces of models aren’t real, we continue to consume media that perpetuates these unrealistic standards of attractiveness? Here’s a really disconcerting piece of information for you to consider: according to a new study, women may be buying fashion and beauty magazines to fat-shame themselves. Yes, you heard me correctly. We’re consuming this garbage under the guise that those waistlines of literally impossible measurements are attainable, be it through diet, or exercise, or sheer willpower. We as consumers are fueling the very fire we’re combatting.

In a five-day study of 51 female college students, researchers showed the women advertisements and stories from various magazines. On each day, they were given 16 articles from popular media brands, each one containing a prominent female figure. The participants were then asked to rate their body image and satisfaction. The researchers happened upon a disturbing realization, finding that rather than women concluding unhappily that they simply don’t measure up to the “perfect” figures on the pages of their favorite magazines, they in fact turn these images into psychosomatic thinspo, thereby setting unrealistic standards of beauty for both themselves and other women.

Author of the study and Ohio State University professor Silvia Knobloch-Westerwick comments, “Women get the message that they can look just like the models they see in the magazines, which is not helpful. It makes them feel better at first, but in the long run women are buying into these thinness fantasies that just won’t come true.” Pretty lame, no?

The worst of this news, however, came after the study was finished. The women were provided with questionnaires regarding their diet habits after they’d repeatedly consumed that imagery for five straight days. The overwhelming result? Women who simply compared themselves to the models depicted had lower body image. The silver lining in this bizarre consumer brainwashing is that the percentage of women who used the imagery as inspiration for fitness actually had higher self esteem. So basically, so long as you’re already dieting and working out and also a beacon of perfection, you should be fine.

“Women might be able to fight off the harmful media impacts on their body satisfaction if they understand how these messages are designed to make them fall for unrealistic and even unhealthy body ideals.”

Hear that ladies? IT’S ALL A LIE. Please consider burning your magazines accordingly.