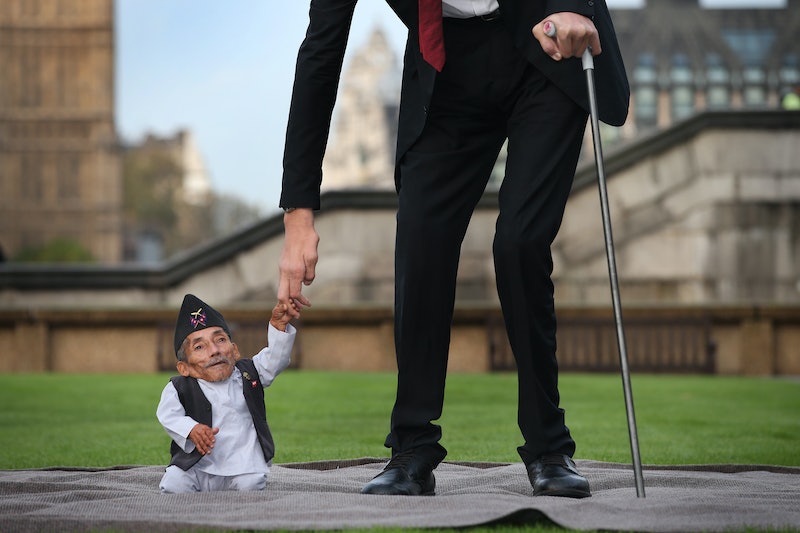 People will do anything to get their names in a book. But not just any book — the Guinness Book of World Records. Thursday marked the 10th occurrence of the annual Guinness World Records Day, and people did weird things. Some weirder than others. The Guinness Book of World Records, of course, is not the most discerning when it comes to the type of feat they will include in their publication — you just have to do something first, longest, or best. Sometimes, you don't even have to do it, you just have to be it. Like be the world's tallest man, who today, incidentally, was introduced to the world's shortest man in just one of the many publicity stunts Guinness manufactured as part of the yearly celebration.

In order to keep a running tally of all the new records being set and broken, Guinness maintained a live blog throughout the day, where feats were noted with great pomp and circumstance. After all, the only thing better than being able to say that you were Time Magazine's Person of the Year in 2006 (the year they chose the general "You" for the honor) is saying that you were part of a record breaking stunt in the Guinness Book of World Records.

Here are just a few of our favorites so far, and they range from the wacky to the truly bizarre.

The world's tallest man, Sultan Kösen, who stands at a staggering 8 feet and 3 inches, met Chandra Bahadur Dangi, the world's shortest man at 21.5 inches, for the first time today, and as with all momentous occasions, had to document the encounter with some photographic evidence.

Sultan, who is a 31-year-old Turkish native, told Guinness, "It has been a real privilege to have taken part in Guinness World Records Day 2014. I love London and to be able to finally meet Chandra after all this time is amazing. Even though he is short and I am tall, we have had similar struggles throughout our lives and when I look into Chandra’s eyes, I can see he’s a good man." Chandra echoed his sentiments, saying,

It’s been a lifelong dream to travel and becoming a Guinness World Records title holder has enabled me to do that. I’m honored to be in London, I’ve always wanted to visit and the fact I get to meet Sultan is special. It makes me extremely proud to represent Nepal all around the world, I’m extremely humbled by the support I receive.

Why run on just two legs when you could use your legs and your arms? This is the logic employed by Katsumi Tamakoshi of Japan, who managed to impressive feat in just 15.86 seconds. I wonder what Usain Bolt would do if he had to run on all fours...

Most people banging their head simultaneously

No, not on a wall, don't worry. Just in the general, I'm-having-such-a-great-time-so-I'm-going-to-nod-vigorously type of way. In Australia, 320 students from Armidale High School banged their heads to "It's A Long Way From The Top" by AC/DC. Honestly, I feel like more people have banged their heads simultaneously, but no one's been around to count. Or organize it.

Most humans dressed as penguins

Seriously, who thinks of these things? In London, 373 people hold the collective crown of the largest number of humans pretending to be penguins loitering in the same place. They should've just killed multiple birds with a single stone and switched out their penguin costumes for bear costumes, then gorillas, and so on and so forth.

Most people eating breakfast in bed together

Frankly, I would've been much more impressed had everyone been in the same bed. But in the Pudong Shangri-La hotel in Shanghai, China, 388 people decided to eat the most important meal of the day in bed, together. At only two to three people per bed, this doesn't look all that difficult. Anyone want to break this record with me?

Ok fine — this one requires some skill. Thunder Law of the famed Harlem Globetrotters made an impressive backwards shot from 82 feet and 2 inches away from the goal, which is basically the other end of the court. Law also holds the record for longest normal shot at well over 100 feet away from the basket. Is there anything the Globetrotters can't do?

No, he's not a record in and of himself, no matter what he may think, but the famous weatherman is going for the record for giving the longest weather forecast in the history of weather forecasts. Come to think of it, with how often the weathermen and their forecasts are wrong, this may not be the worst idea to come out of the Guinness World Record Day. Never forget: #Rokerthon.