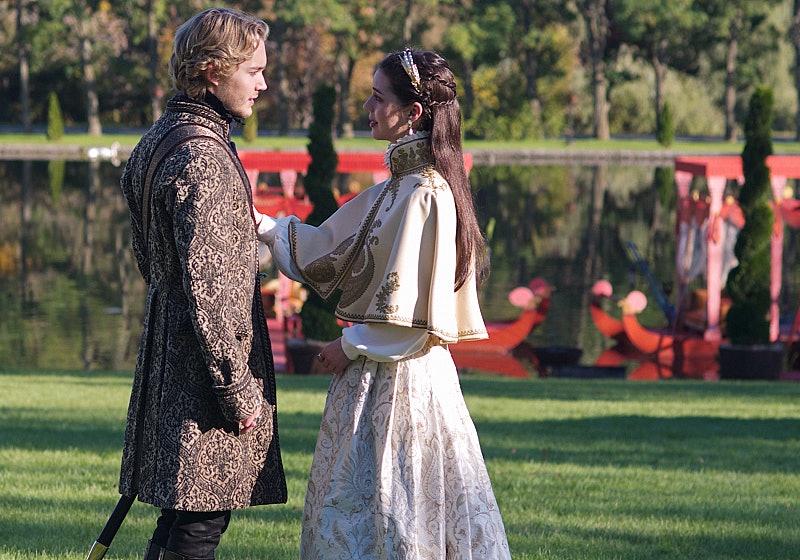 This week's episode of Reign had it's usual Reign share of drama (which is to say, a ton). There was Lola's relationship with Narcisse heating up. Francis trying to get Lola to betray Narcisse. Queen Catherine is seeing creepy little girl ghosts who give the Shining ghost twins a run for their money in the creep department. There was all kinds of mildly-boring political intrigue.

And then, there was Francis' wild child baby sister, Claude. Princess Claude takes all of the sex and intrigue of the rest of the Reign cast and triples it. Her introduction involves flashing a guard for a shot of whiskey whilst her escort and lover (who is also a priest) sleeps next to her in the carriage.

Princess Claude has a lot amazingly risqué moments, but the biggest jaw-dropper has to be the reveal of her incestuous relationship with Bash.

Yeah. I'll give you a second to re-read that. I totally support Claude's status as a wild child. She's going to shake things up. I don't even mind the incest plot (it's a hot storyline right now — Game of Thrones, Flowers in the Attic, August: Osage County, the list goes on). I'm not, however, loving the explanation (which you might miss if you weren't paying close attention) for why Bash agreed to the tryst.

It wasn't just a bad decision or a lapse in judgment. He accuses Claude of convincing him that Henry wasn't really his father (since he's their shared parent and all). Painting Claude as such a black and white villainess takes all of the fun out of the character. Plus, failing to let Bash take any ownership in the situation cheapens his character too. One of the great things about Reign has always been that the characters, even the best ones, have dark sides.

Here's what I want to see from Princess Claude going forward, to elevate her from fun new character to Reign favorite: