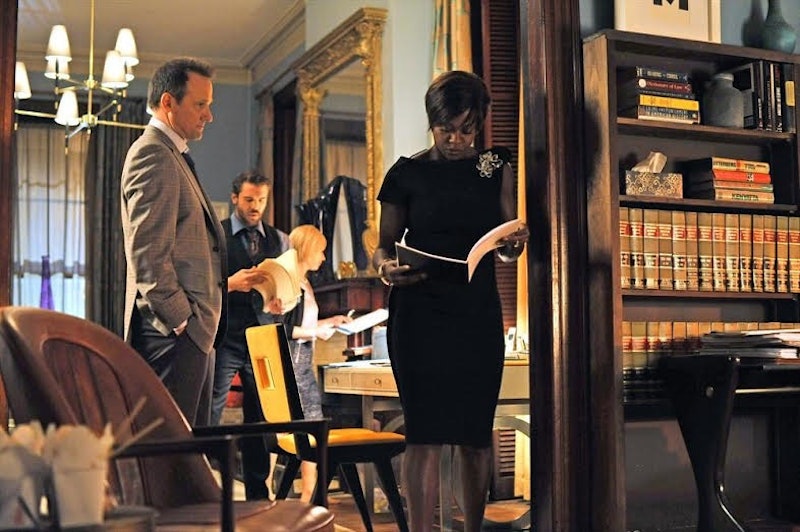 To be in Annalise Keating's HTGAWM inner circle is like being in someone's Myspace Top 8 — it's a huge f'ing deal. Whether you're an attorney that works along side her, a "deal with it" guy (Frank) who isn't licensed to practice law — but you'd never know that if you didn't catch one comment about it in episode one — or the Keating Five, the five luckiest — and most unlucky — law students in the entire program, you want to be an Annalise Ally. So it was pretty shocking in Thursday's episode when Bonnie — maybe murderer and one of the most loyal allies to Annalise — was fired by Annalise because of her relationship with Mr. Annalise Keating, Sam.

It happened pretty suddenly on Thursday's episode, but Bonnie's departure felt imminent since the very beginning. We knew Bonnie was basically in love with Sam — she might have even killed him, but probably not — but we didn't know how much the relationship was reciprocated. I, for one, always thought Bonnie came off as someone who watched from afar for her boss' husband. In the new episode, it seems that could actually be the case, since it looks like Sam thought he could manipulate Bonnie into keeping his big secret about Lila.

About that secret. So we learned the following during a very revealing conversation between Mr. Darcy — sorry, Sam — and Bonnie:

The real plot twist here is that Bonnie did tell Annalise what happened. Probably because she realized Sam wasn't the guy she thought he was so she wanted to tell Annalise so she wasn't the only one hurtin' — but that's just my theory. Between broken sobs and begging — no, seriously, why did Bonnie get on her knees and beg — Bonnie told Annalise that she had kept the Lila run in from her, and that Sam kissed her. Annalise told her she was fired, and to never come back, because she needs to have a final, dramatic line — she deserves a final, dramatic line.

There was a point that Bonnie looked like a pretty good suspect as to Sam's killer. But with Annalise sending her away from the office, it seems very unlikely that Bonnie returned to the office and killed Sam, before going to meet Asher at his place for a sexcapade.