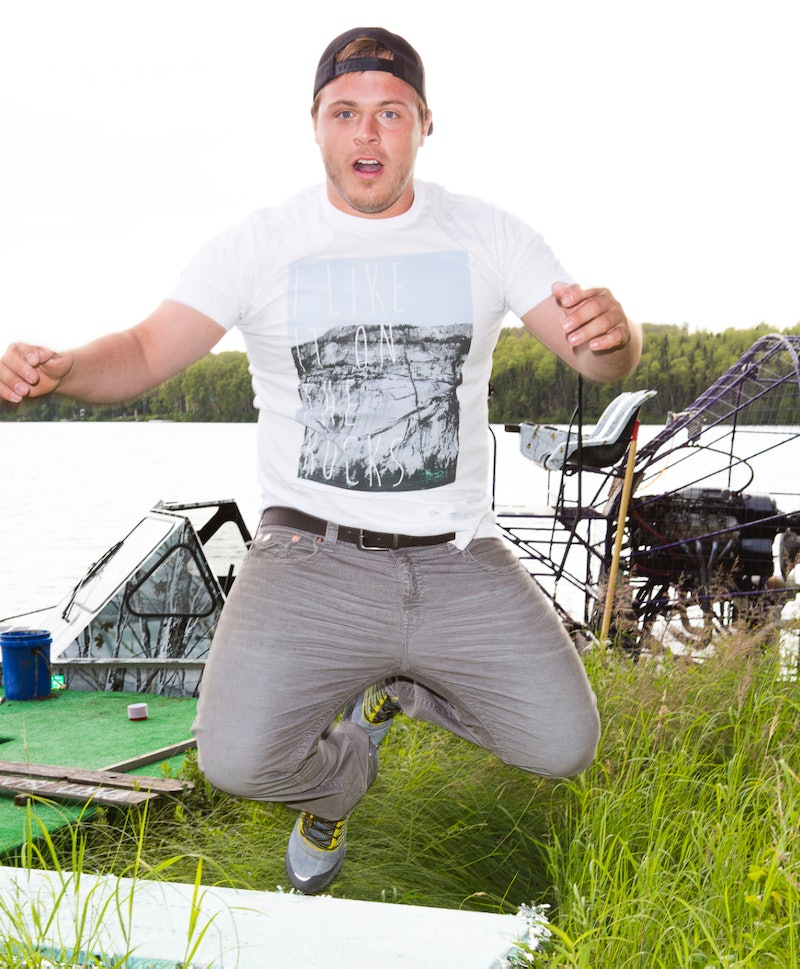 Last Thursday’s break-up season party brawl and the C-word/bottle throw incident were just the tip of the bloody iceberg. (Welp. That's a fairly disgusting visual. Sorry about that.) There was more fightin' to be had! In Thursday's episode of Slednecks, the cast went to an MMA match. And not just any MMA match. It was Kelly's MMA match. And not just any Kelly. It was a hungover to hell and back Kelly. The cast cheered on a very hungover Kelly as he wrestled, grappled, punched, kneed, and elbowed his opponent. I waited for Kelly to spew up whatever booze and/or snacks that were left in his system from the previous night's party, but he managed to keep it together. I'd underestimated him.

But before our fighter entered the ring, Dylan, Trevor, and Leonard the Airboat King went into the locker room to give a pre-match pep talk. No offense to Trevor or Dylan, but I totally forgot whatever they did or said. Because once Leonard began firing off his words of wisdom, nothing else mattered. Leonard’s words of wisdom were phenomenal. The greatest nugget of wisdom: “Rip his lips off.”

RIP HIS LIPS OFF.

Alas, Kelly blatantly disobeyed Leonard. That is to say Kelly did not remove his opponent’s lips with his bare hands. When the match ended, I made sure to take a good look at Kelly's opponent’s face. The verdict: intact lips. Kelly opted to punch his opponent in the face a bunch instead. This move worked, because it was the move that led our hungover hero to victory.

Here are the most important lessons I learned from ep. 3 of Slednecks:

12°F is so cold. Like, how could any of them move, let alone snowboard?

I'd be such a square if presented with the opportunity to naked snowboard with my friends: "Nah, I'm gonna sit this one out, per usual. Y'all have fun boarding in the buff. I'm going to hang out in my car with this down blanket and this magazine. If any of you get too cold, I have two electric blankets in the trunk that plug right into the cigarette lighter. Ya know, just in case. Oh, they didn't cost that much. Don't worry. I had a coupon. Hey, if anyone thinks they can't feel any limbs or digits, come back to the car right away! I don't want any frostbite fiascos. Anyway, have a blast! Be safe!!!!"

More like this
The Richest 'Bling Empire' Cast Member Is...
By Hugh McIntyre
Jake Daniels Just Became The UK’s First Active Football Player To Come Out As Gay Since 1990
By Sam Ramsden
What Is Jeanie Buss' Net Worth? The Lakers President Is Uber Rich
By Hugh McIntyre
Pete Davidson Mentioned Kanye West & Ariana Grande In His Last 'SNL' Sketch
By Grace Wehniainen
Get Even More From Bustle — Sign Up For The Newsletter