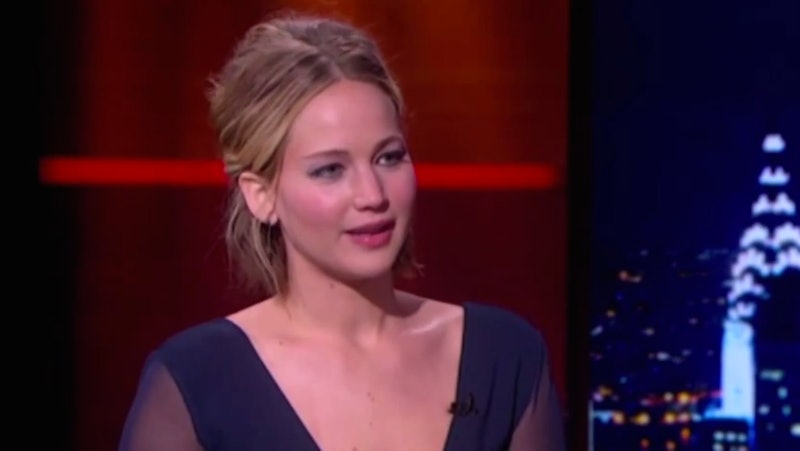 I'm pretty sure it's official at this point: The Hunger Games franchise may be a serious, dramatic film series, but the cast of those films are without a doubt the most charming in Hollywood. It's not often that you can say about a departing film franchise that you're going to miss the press tours leading up to the film releases more than you're going to miss the movies themselves, but, because of stars like Jennifer Lawrence and Josh Hutcherson, I'm going to go ahead and say that's honestly true about The Hunger Games franchise. With the release of The Hunger Games: Mockingjay Pt. 1 set for next Friday, Nov. 21, the press tour leading up to the film has fully begun — and, already, we're receiving gems from Lawrence and co. For example: During an appearance on Wednesday's Late Show With David Letterman , Jennifer Lawrence showed off her (not so great) singing chops for the audience. And, for Thursday's late night circuit, two Hunger Games stars pulled quality late night TV double duty: With Jennifer Lawrence appearing on The Colbert Report , and Josh Hutcherson appearing on The Tonight Show.

Both appearances are, of course, just as charming as Lawrence and Hutcherson themselves are. During Lawrence's Colbert Report visit, the two mainly chatted about how Lawrence has accomplished so much, she could technically just give up at the age of 24 and no one would even care because girlfriend has won like a million awards already. Then, they discussed a hypothetical upcoming public breakdown she could go through, if she so chooses:

"How about crystal meth and boosting cars?" Colbert suggests, but Lawrence shoots him down a millisecond later with a — gotta say — good reason to never even get close to crystal meth: "Ooh, bad for the skin." (Seriously, skincare products are way too expensive, she's got a point.)

During Hutcherson's Tonight Show appearance, the 22-year-old star played one of the late night show's signature games with host Jimmy Fallon: This time, beer hockey, which is apparently a hybrid of beer pong and air hockey. Of course, competition was fierce — but, for the sake of leaving it a surprise, I won't spoil who comes out victorious. Let's just say you have to see it for yourself.

I know it's unorthodox and stuff, but would it be weird if JLaw, Hutcherson, and Liam Hemsworth just...kept on doing Hunger Games press tours even after next year, when the final film in the series, Mockingjay Pt. 2, is released? Like, to commemorate the anniversary of when a new Hunger Games film would have been released? Because seriously, the franchise isn't even over, and I'm already having separation anxiety from these guys.

Check the interviews below.