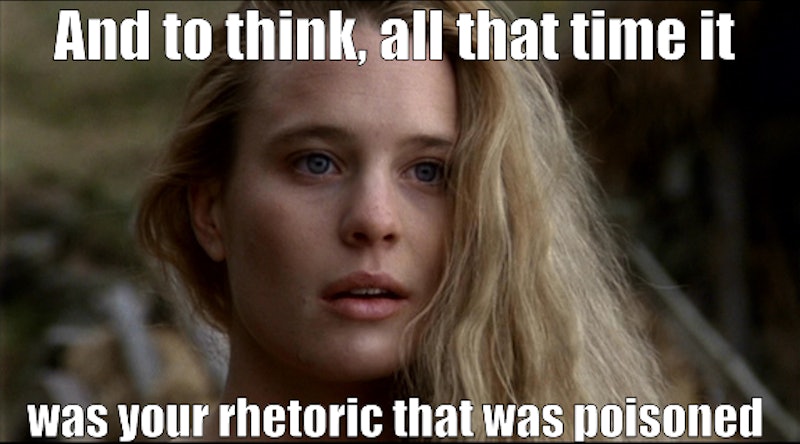 OK, before we continue, we’re all clear on how nuts it is that Time’s Worst Words Poll for 2014 wants to ban the word “feminist,” right? Good — because among the many excellent reactions to this puzzling and troubling turn of events, one has risen out of the masses to win the (imaginary) award for Best Response Ever: The Twitter hashtag #FeministPrincessBride. Seriously, you guys. If I didn’t actually have a job to do, I would spend all day doing nothing but reading every #FeministPrincessBride tweet I could find. It’s true that my job conveniently allows me to spend at least a little bit of the day doing just that… but I mean, really. It’s the best.

It’s especially the best in light of the Daily Dot’s discovery that 4chan’s worst trolls are apparently trying to rig the Time poll such that “feminist” wins by a landslide. I can’t say I’m surprised by it… but the fact that I’m not surprised is almost worse than the fact that it’s happening in the first place. Happily, though, #FeministPrincessBride is the perfect antidote to the eyeroll-facepalm-WTF reaction I had to 4chan’s latest piece of awfulness.

Admittedly I’m a little late to the party on this one, but I have since rectified that oversight by following the hashtag’s originators. As pointed out by The Frisky, #FeministPrincessBride first started trending as a result of a few observations writer Anne Thériault of The Belle Jar made on Wednesday about the proposed “feminist” ban — or perhaps more specifically, the absurdity of it:

Which is pretty brilliant all on its own. However, Aaron Wrotkowski, senior editor for Last Word on Sports, felt more along the lines of how I did:

Which led to this exchange:

And then this one:

And, well… you can probably guess where this one is going. And yes, it's as magical as you think it is.

Since then, riffs on The Princess Bride filed under the hashtag have flown pretty much nonstop, making it both the most hilarious response to the poll, as well as one of the most thought-provoking. And I do mean that, by the way; every one of the word substitutions and variations on the theme make perfect sense. Every. Single. One. It’s rather remarkable how wonderful society becomes when viewed through the lens of The Princess Bride.

I can’t recommend enough heading over to Twitter and watching #FeministPrincessBride unfold in real time — but just to give you a taste of what’s in store for you if you do, here are a few of my favorites:

Go. Read them. Read them all. I promise you it will be the best thing you do all day. In the words of Thériault, have fun stormin' the patriarchy!