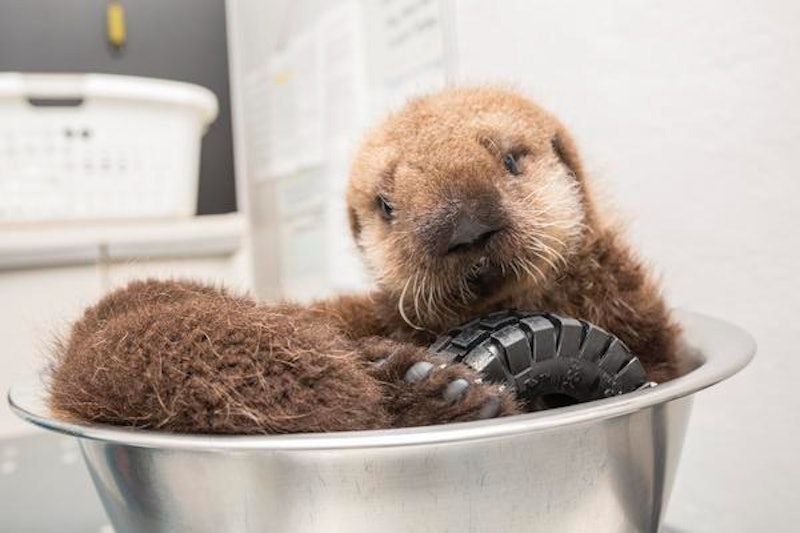 When I was going over my Things to Be Thankful For This Thanksgiving, I was pretty happy with my list — you know, great friends, great roommate, great job. But the chance to Google Hangout with Baby Otter "Pup 681," aka the cutest, fluffiest, bestest thing on the planet and watch her try to swim? I never in my wildest dreams imagined I could be this thankful for anything. I will get to casually G-Hang, with an otter. And so could you.

For the last week, most of the YouTube-watching world, myself included, has been addicted to the fuzzball of wonderfulness known as Pup 681, the five-week-old sea otter learning how to be an otter. I know I can't be the only one who's watched the videos repeatedly and looked up how to buy a sea otter (it's really hard) and researched the species (FYI: hers is extremely rare, having been severely diminished by a combination of global warming related-issues and the fur trade).

Let's face it, we love Pup 681. Pup 681 is more than the magical combination of kitten and puppy and plush toy that we never had, Pup 681 is our adorable (colicky) baby. (If you have no idea what I'm talking about, then your life has been lacking an incomparable source of joy for the last week and I urge you to get that fixed, ASAP.) But, you know, we've accepted that she's a baby we'll have to love from afar, as she is currently at Shedd Aquarium being taken care of by a team of experts.

But that team of experts may be almost as wonderful as Pup 681 herself, because they've arranged for us all to hang out with the baby otter. In four days' time, they're hosting a Google Hangout with Pup 681, and we're all invited. We'll get to see her nursery, and watch her swim. Maybe we'll catch her drinking some formula, or having some nuts, or squeaking as tries to dry herself off. Maybe we'll even get to watch her playing with a mini-basketball, and all our insides will explode into a million tiny pieces of happiness.

Say the team in their invitation:

Have you been cooing over photos of our new sea otter pup? Would you love to hang out with her poolside? Here’s your chance! Join us for a Google Hangout on Air on Tuesday, Nov. 18, at noon CT. Legendary anchorman Bill Kurtis will lead the chat as we go behind the scenes to Pup 681’s nursery and hear from the experts who have cared for her at Shedd Aquarium and Monterey Bay Aquarium.

Just watch this video, then try and tell me you're not cancelling all your plans to chill with a mammal on your computer: