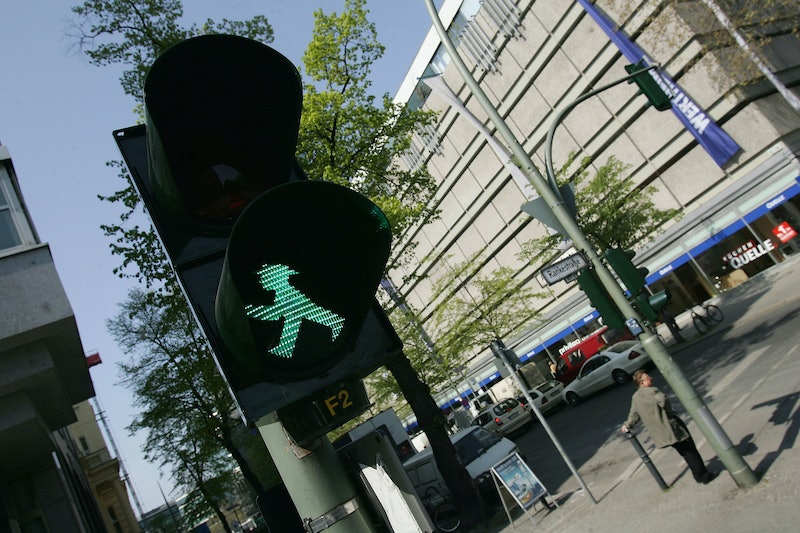 Germany is known for many things, chief among which are its bratwurst, beer (Oktoberfest, come back!) and the punctuality of its people. But the most endearing of "German things" could be the Ampelmännchen — traffic light men, for those out of the loop — the little green or red icons on pedestrian traffic lights. Soon, however, pedestrians in one German city may notice a slow, subtle change in their familiar routes, as Dortmund politicians debate introducing "traffic light women" to its streets.

Local politicians from the Social Democratic (SPD) and Green parties want to set a 50% gender quota for traffic light icons, replacing half the cities Ampelmännchen with Ampelfrauen. In a joint application to the city council, both parties stated:

A pretty solid argument, I would say. Germany is set to introduce female quotas in companies to balance out the gender gap, though, like many other countries, it still faces challenges in achieving the utopia of a gender-equal society. But its most powerful political leader is Angela Merkel, heroine of the European Union economic crisis, and Germany has a smaller gender gap than most other countries in the world.

If approved, the quota would be rolled out over a period of time to save money — Ampelmännchen will only be replaced by their female counterparts if they're broken or damaged, said Philip Olterman at The Guardian.

The reasoning behind the Ampelfrauen is not only a gender issue, but also common sense. Oltermann noted that since the proposed design for "traffic light woman" will feature a skirt, it would allow for more light to be emitted, thus making it more visible.

Dortmund's proposal has inevitably irked some people. Westdeutsche Allgemeine Zeitung posted on its Facebook page a somewhat sarcastic response to the application, suggesting instead "traffic light couples" or Ampelpärchen.

The caption reads, in English: "Traffic light men! Traffic light women! There, we had a compromise proposal, dear Dortmund: the traffic light couples."

A similar proposal in Berlin was rejected, partly because some politicians disagreed with the design of the Ampelfrauen — its pigtails and skirt were too out-of-date. One district SPD leader, Martina Matischok, said that the "traffic light women" needed to complete her male counterpart, not replace him, and that she should not sport stereotypically sexist characteristics like high heels, according to BBC News. "Traffic light women" are commonplace in other German cities like Bremen, Cologne and Dresden.

The Washington Post reported that Social Democrats in Dortmund conceded the proposal might seem a tad frivolous, given the number of other more pressing matters like the influx of refugees.

More like this
Sandra Bullock, Girlboss Extraordinaire
By Matt Harkins & Viviana Olen
Chelsea Woody On Shattering Stereotypes In Surfing
By Leah Groth
Twitter Was Saying The Same Thing About Sam Ryder’s Surprising Eurovision Result
By El Hunt
Photos Of Boris Johnson Drinking At A Downing Street Lockdown Party Have Surfaced
By Bustle UK
Get Even More From Bustle — Sign Up For The Newsletter