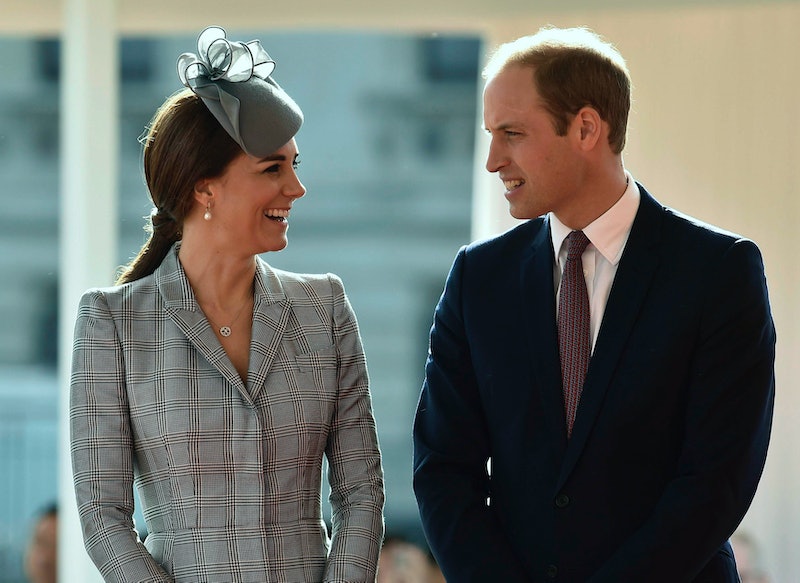 Excuse me as I learn to play the trumpet and ride a horse for Prince William and Princess Catherine's (but that's stuffy, let's just call her Kate) impending New York City arrival. The only downside to this momentous Will and Kate New York event is that, apparently, they aren't bringing their chubby and impressively emotive baby, Prince George, along with them. Boo, you guys. Boo. But let's not focus on the negative aspects too closely, like the absence of Prince George and the fact that they'll only be staying for two days. (That's an awfully long plane ride for such a short stay. *whispers* Don't leaveeee.) Oh yeah, and Prince William's going to be in Washington D.C. for the better part of the first day. Whatevs, more Kate for us New Yorkers.

Anyway, let's get to the real meat of the extravaganza — where are they going to be in NYC?! Well, a whole lot of charity events, that's for certain. But they're be participating in some recreational activities as well. You have to blend both the serious with the fun, right?

According to E! Online, as per the palace, this is how the visit's going to go:

Will and Kate arrive! PAR-TAY. The site says that they're visiting the National September 11 Memorial and Museum and a going to a "private engagement" with the American Friends of the Royal Foundation.

Prince William will be back in NYC that night to take Kate to shoot some hoops. Well, sorta. So, here's your warning guys. Run, don't walk to get your tickets to this supposed "NBA basketball game" they're going to. How many people can say they went to a Knicks (or Nets!) game with the royals?

On their final day in New York, the couple will go to The Met, eat a shmancy dinner... and go home. :( E! Online reports that, "...Will visit a youth organization in New York as well as an event celebrating all of the local British talent in the creative industries," and in addition to that, "...Kate and William will head to their alma mater's (The University of St. Andrews) 600th anniversary dinner held at the Metropolitan Museum of Art."

Don't be too sad though if you miss them, guys. They didn't even make plans to ride the Staten Island Ferry to get a free view of the Statue of Liberty. That means they have to come back.