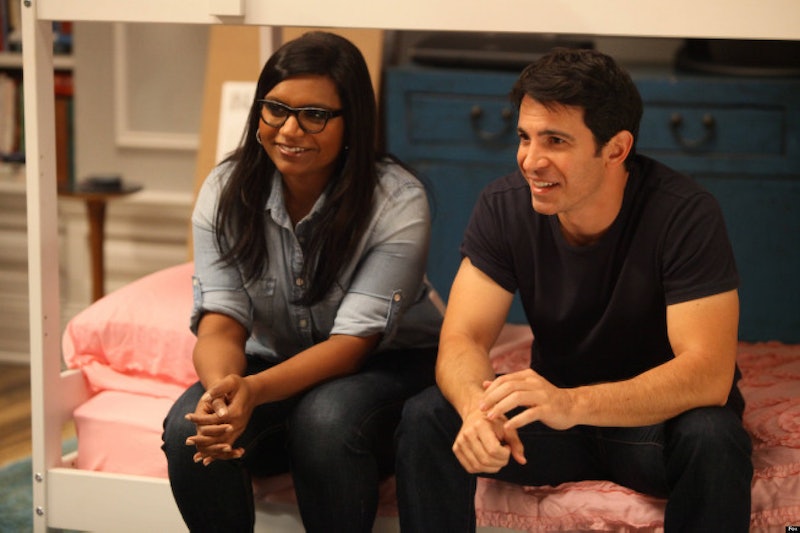 Fox has ordered more of The Mindy Project for this season. The current third season was supposed to just be 15 episodes, but it's now been extended to a full 21! As happy as I am that we'll be seeing more of the Mindy/Danny relationship this season, I'm wondering why the network executives made this decision. Mindy is not exactly a ratings success, with only around 3.1 million viewers, many of whom just stick around after New Girl.

Mindy has done better this season, with critics pleased by the many cast changes and improvements that have been made. It took a while for the show to hit its stride, but it has been consistently funny this season, with a stronger supporting cast. In spite of this, the Mindy and Danny relationship is the most interesting on the show, and Mindy herself is still the most appealing character. Watching Tuesday's episode, I found myself sadly wondering how long this quirky show has, and whether a few good jokes per episode can make up for the fact that many of its characters don't stick. Luckily, this announcement has restored my faith that some people are rooting for the show.

Kaling is, of course, delighted by the news.

And, adorably, Liz Meriwether, creator of New Girl, congratulated Mindy that they get to continue their Tuesday night partnership:

Fox hasn't been doing too well this fall, with shows like Mulaney totally tanking. It's possible that they have extended Mindy's stay because of its consistent female fan base and critical appeal. It also seems possible that it will continue on its streak of improvement. Kaling revealed that Lee Pace will guest star on an upcoming episode, which should be fun. I also feel that there are quite a few directions that the show could go in with its lengthened season. Here are some questions I think should be answered before the season ends.

Will Peter ever find the right woman?

As Allison Piwowarski noted on Bustle after Thursday's episode, Peter seems to be growing as a character. His addition has definitely improved the show, but I wonder whether he should stop dating, or at least settle down for a bit. I'd love to see more of his personal growth and his soft side.

Will Mindy and Danny stay together?

Instead of embracing the "will they or won't they" sitcom trope, Mindy and Danny have been (mostly) happily coupled this whole season. But weren't Mindy's dating hijinks the main draw of The Mindy Project? I haven't been disappointed in the couple's plot lines so far, but I wonder how long such prickly characters can stay together before it seems unrealistic or gets boring. I bet something will come to a head by the end of the season.

How are Tamara and Morgan still together?

I don't understand it, but I love it. I would love to have a better understanding of their wacky relationship by the end of the season.

Will Jeremy stop being a jerk?

Jeremy stole Peter's girlfriend, and has been super unapologetic about it. Though he has not always been incredibly sensitive, he has almost turned into an antagonist. I'm hoping he gets a humanizing subplot before the season ends.

What will Lee Pace do?

Apparently, the Pushing Daisies star will play a dork turned millionaire who took Mindy's virginity during college. What I'm looking forward to is how Danny reacts to this intrusion. I have a feeling it will not go well. Could it be that this is what will tear Mindy and Danny apart? I'll have to wait and see.