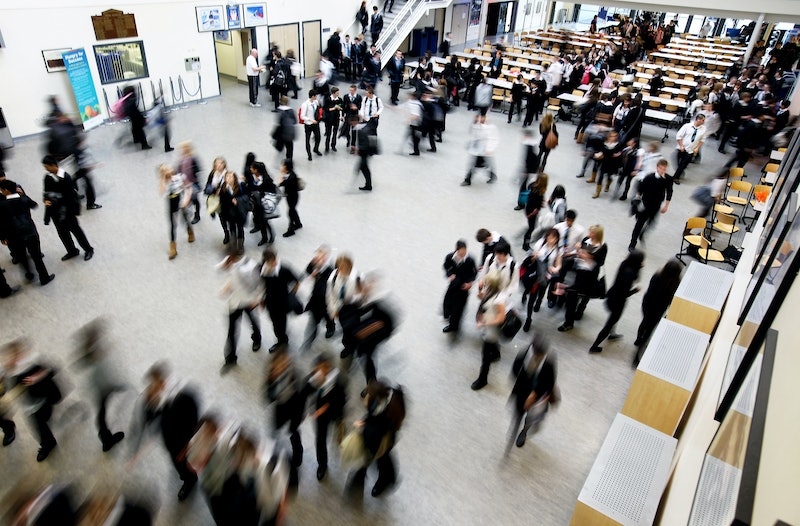 Even as we seem to be making rapid progress on issues like same sex marriage, the fight for full LGBT equality still has a long way to go. At least that's the impression left by the Gay, Lesbian, Straight Educational Network's latest report on school climate. The findings are, to put it mildly, less than ideal.

According to GLSEN's report, schools are pretty unfriendly places for LGBT youth. Of the more than 8,000 LGBT middle and high school students surveyed, 71 percent have heard "gay" used in a negative way "frequently or often" at school, and 65 percent report other homophobic slurs are used with similar frequency. 57 percent have heard negative remarks about gender expression frequently or often, with a third also routinely exposed to transphobic slurs. Over half report hearing homophobic or transphobic language from teachers or school officials.

And, even worse, 74 percent of LGBT youth report being verbally harassed due to their sexual orientation in the past year. Over a third were physically harassed, and 16 percent were physically assaulted. Rates of harassment and assault based on gender expression are somewhat lower, but still unacceptably high. And over 60 percent of students who reported such incidents to school officials say that the staff did nothing about it.

In fact, many LGBT students also face active discrimination from their schools. Students report everything from being prohibited from forming a Gay Straight Alliance to having their clothes and gender expression policed by school staff to being disciplined for public displays of affection that were not disciplined among non-LGBT students. Around 1 in 6 students even report being prohibited from writing or talking about LGBT topics.

And that has very real, very negative consequences, as GLSEN points out in their video about the report's findings.

"Schools are supposed to be where our children can grow academically and as individuals,” said the co-chair of GLSEN San Diego, Chet Sewell. “That cannot happen in a hostile environment. The good news is we know what works, including school personnel that are supportive of LGBT youth, student-led Gay-Straight Alliances, and a curriculum that includes accurate and positive information about LGBT people, history and events.”

Who knows, but lets hope we get there soon.

For more info, including a state-by-state break down that can show you how your state specifically is doing when it comes to supporting LGBT youth, check out GLSEN's website or check out the full report.

More like this
Christina Aguilera Took A Powerful Stand At Brighton Pride
By Sam Ramsden
Demi Lovato Explains Why She's Now Using She/Her Pronouns Again
By Alice Broster and Radhika Menon
'Heartstopper's Yasmin Finney Wants To Be The First Trans Bond Girl
By Sam Ramsden
25 Things I've Reduced My Life To, In Addition To WFH In My PJs
By Ginny Hogan
Get Even More From Bustle — Sign Up For The Newsletter