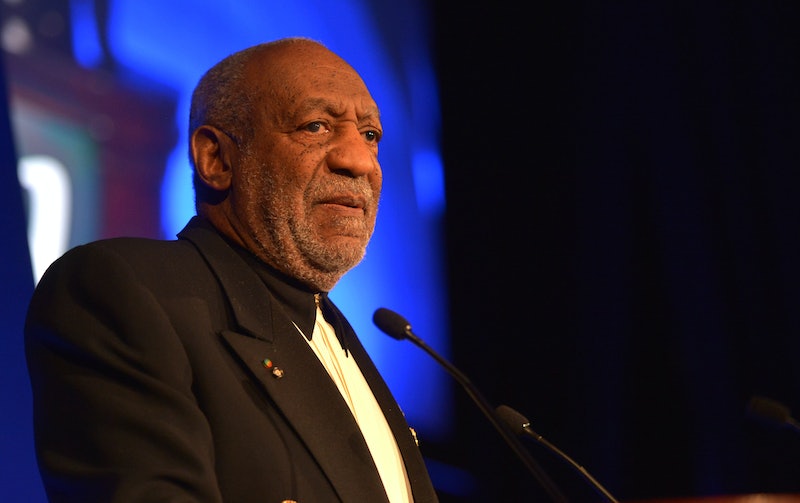 After horrifying rape allegations were made against him, EW is reporting that Bill Cosby’s upcoming appearance on The Late Show with David Letterman has been canceled. This news comes after Cosby gave an interview to NPR , in which he refused to answer questions pertaining to the allegations against him, instead remaining silent as host Scott Simon continued his line of questioning about the accusations.

Though neither Cosby nor Letterman have commented on which party canceled the appearance, if it was indeed The Late Show's decision, it was the right one to make. It's also worth noting that this also isn’t the first cancellation Cosby has experienced since several women have come forward with horrifying allegations of rape against Cosby. The comedian’s scheduled appearance on The Queen Latifah Show for Oct. 30 was also canceled, immediately after Hannibal Buress called Cosby a rapist during one of his stand-up routines.

Now that this is the second appearance that’s been canceled for the actor, I have to wonder whether or not Cosby’s planned NBC comedy show, expected to premiere during the summer or fall of 2015, will stay afloat amidst the allegations — NBC or Cosby himself have yet to comment on the status of the project.

More like this
Hilary Duff Spills The Tea On Why Disney+ Canceled The 'Lizzie McGuire' Reboot
By Jake Viswanath
The Music Industry Continues To Fail Black Women
By Precious Adesina
Celebrities & President Biden Are Enraged By The Leaked Roe v. Wade Decision
By Alyssa Lapid
Sandra Bullock, Girlboss Extraordinaire
By Matt Harkins & Viviana Olen
Get Even More From Bustle — Sign Up For The Newsletter