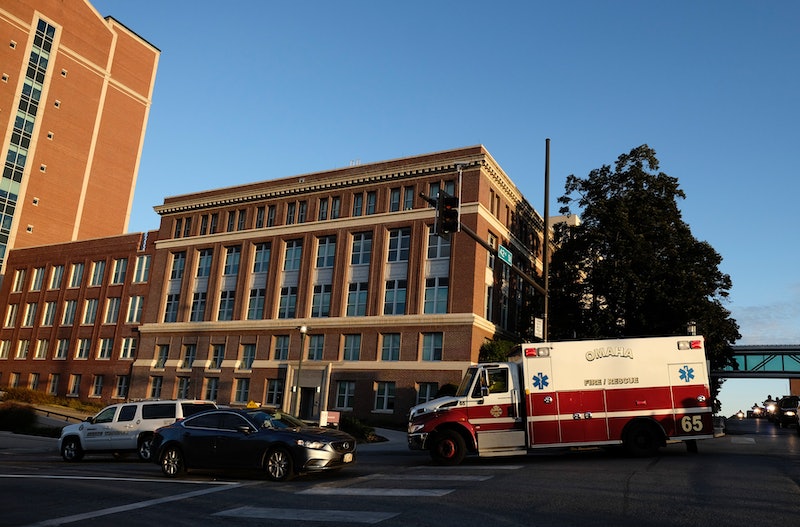 The latest patient to be treated for the Ebola virus arrived in the United States on Saturday afternoon. Ebola patient Dr. Martin Salia was transported to Nebraska, where he will undergo treatment at the Nebraska Medical Center in Omaha. A native of Sierra Leone — where he contracted the deadly virus — Salia is a permanent U.S. resident, and currently resides in Maryland. At this time, it's unclear how Salia, a surgeon, contracted the virus, as he doesn't attend to Ebola patients at his Sierra Leone hospital.

The Associated Press reports that Salia, 44, arrived in Nebraska on Saturday in critical condition. Hospital officials believe his current state may be worse than the other Ebola-afflicted health workers who were transferred to the United States from West Africa for treatment, including survivors Kent Brantley and Nancy Writebol.

Salia's health team in Sierra Leone said he was "critically ill," CNN adds. However, the news source reports that Salia was evaluated this week in Freetown, Sierra Leone, by an air ambulance crew, who cleared the doctor for travel.

Still, Salia's family, who coordinated with federal officials for his transport to America, are worried, according to CBS affiliate WJZ. In an interview with reporter Mike Hellgren, Salia's wife, Isatu, said: "Since 1 o’clock when I spoke to him, I can’t sleep ... I know he’s sick. He was a little slow talking."

According to WJZ, Salia has been splitting his time between his native country Sierra Leone and the United States. The doctor has been treating patients at a Methodist hospital in Sierra Leone, one of the most Ebola-stricken countries in West Africa. However, Salia's son, Maada, said his father doesn't typically treat Ebola patients at the Sierra Leone hospital, but he knew the risks about serving as a health care worker in the disease-afflicted nation.

Salia is the 10th person to be treated for Ebola in the United States, and the third Ebola patient admitted to Nebraska Medical Center. The Omaha facility successfully treated Dr. Rick Sacra, a physician from Massachusetts, and Ashoka Mukpo, a freelance cameraman for NBC. Ebola patients are admitted to the hospital's biocontainment unit, which was commissioned by the Centers for Disease Control and Prevention in 2005.

More like this
Michigan’s Governor Is “Going To Fight Like Hell” To Protect Abortion Access
By Andrea Zelinski
An Honest Review Of The TikTok-Famous WalkingPad
By Kaitlyn Wylde
Plan C Vs. Plan B: What's The Difference?
By Lexi Inks
11 Benefits Of Cross-Training
By Carolyn Steber
Get Even More From Bustle — Sign Up For The Newsletter