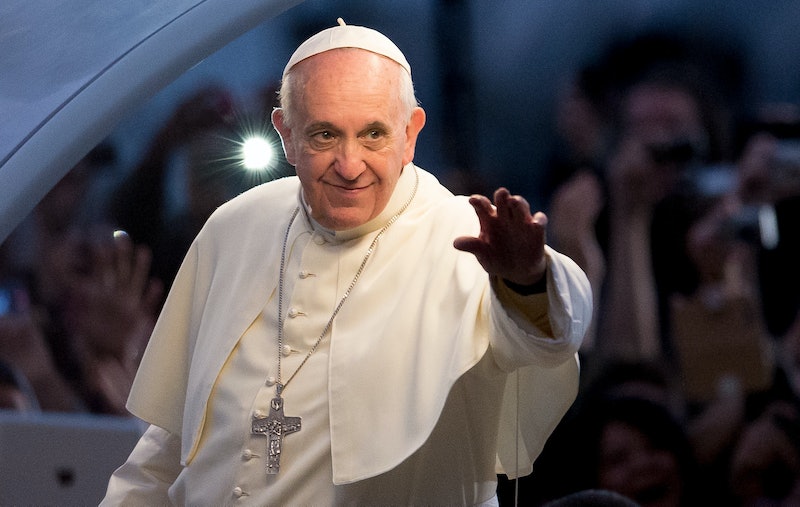 "Jesus died for somebody's sins, but not mine" — at least, that's how Patti Smith opens her emblematic punk-rock anthem "Gloria." Will the Godmother of Punk have the audacity to wail that at the Vatican, in front of the Holy See himself, this December? You heard that right: Cool Pope™ Pope Francis invited Patti Smith to the Vatican's Christmas concert, where she'll perform alongside the likes of the singing Italian nun — and Italy's The Voice winner — Sister Cristina Scuccia in all her subversive glory. Pope Francis, a fan of a sometimes-vulgar proto-punk artist whose soul mate was a gay man tormented by his repressive Catholic upbringing?

Francis has already given bishops in America relentless migraines over the last few months — between his talk of welcoming gay couples into the Catholic Church and demoting an ultra-conservative, Pope Benedict XVII-appointed cardinal from his top Vatican post — so you'd think the Cool Pope™ would kick back, flip on his Ray Bans and chill for a bit. Instead, he's going to rock out to Smith: a pro-choice, pro-LGBT, organized religion-rejecting rock star. Hey, if Francis can accept gay couples, atheists and people who cohabitate before marriage into the Catholic Church, then he can accept Patti Smith.

This is hardly a one-sided relationship. Smith met Francis while visiting St. Peter's Square in 2013, and finds the Cool Pope™ almost as cool as she is. She told reporters at the time that Francis was "very interesting," according to The Independent.

Although Smith is not a follower of any organized religion — her mother was a Jehovah's Witness, which turned Smith away from religion — the rock artist told Rolling Stone earlier this year that people shouldn't get the wrong impression from some of her blasphemous-sounding lyrics:

I wrote the first lines of 'Gloria' when I was 20. I recorded it some years later for Horses, but really, it was a declaration of self, not so much about Jesus. He is the vehicle, but I was declaring my existence, my right to make my own mistakes, my right to make my own choices. I was defining the type of artist that was entering the domain of rock & roll and the type of artist that I was, one who was going to make her own decisions.

"Gloria" may still be out of the question for the Vatican's Christmas concert, but maybe Smith can take on some Lou Reed covers for the occasion, because Francis is not just the Cool Pope™ in a sea of squares. Following Reed's death in October 2013, Cardinal Gianfranco Ravasi, the Vatican’s culture minister, tweeted lyrics from Reed's popular "Perfect Day" as tribute — though he made it very, very clear that he wasn't condoning heroin. That's just not cool.

More like this
Justin Bieber Just Added Another Date To His UK Tour
By Sophie McEvoy
Britney Spears Met The Weeknd & Sam Levinson, So She May Actually Be On 'The Idol'
By Jake Viswanath
Kim Kardashian Reacts To Kanye West’s Diss Song “Eazy” On 'The Kardashians'
By Jake Viswanath
Harry Styles Performed A Snippet Of Taylor Swift’s “22” & The Crowd Went Wild
By Jake Viswanath
Get Even More From Bustle — Sign Up For The Newsletter