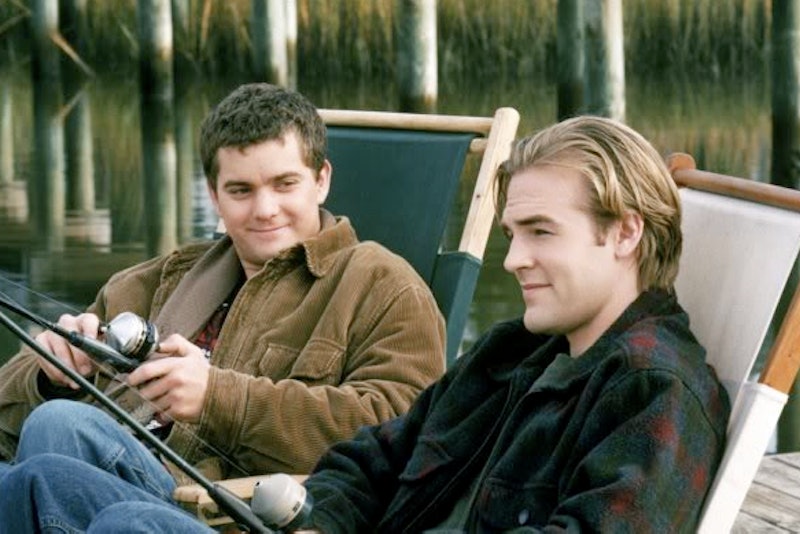 The friendship and subsequent estrangement of Dawson Leery and Pacey Witter was a staple to the dramatic teen television of the '90s to early '00s. Could they ever truly be best friends again after all that betrayal? Who knows! All I really know is that former Dawson's Creek ers Joshua Jackson and James Van Der Beek reunited Saturday, and that it was beautiful.

Van Der Beek, who of course played titular character Dawson in the iconic '90s series, tweeted a photo Saturday of himself with Jackson (below), alongside a caption:

The most pleasant run-ins can happen in the most unexpected places...

That would imply that this was not planned — take that as you will in re: the constant rumors of a Dawson's cast reunion. The pair smiled big for the cameras, which is nice considering that one of the many rumors from back in the Dawson's Creek days was that these two did not get along. These were very rumory rumors, mind you, so I'm willing to put them aside and just stare at their beautiful faces — it has, after all, been over a decade since Dawson's Creek ended. It's tempting to imagine what they talked about in their run-in: Did they bring up the cast reunion rumors? Did they reminisce about the days of parties and really intense heartthrob stardom? Did they talk about their relationships/children, or did they just talk about Michelle Williams' Oscar noms?

Oh to have been present for this moment. I can't help but imagine this being Pacey and Dawson reunited and getting past the petty fights of their past, because that's just how far gone I am in my nostalgia: