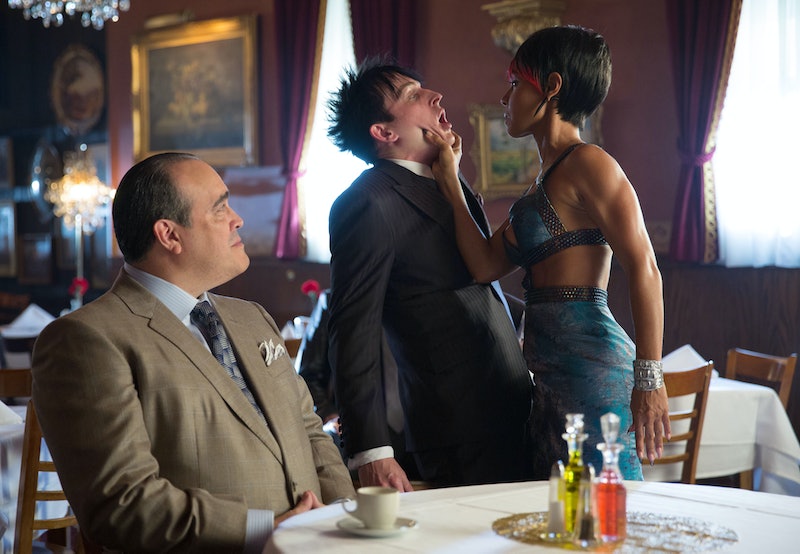 Sure, Gotham has become reliably enjoyable. But the writers are still trying to take the best parts of their show, Jada Pinkett Smith and Robin Lord Taylor's performances, and match them with the Batman origin story. So with that in mind, is there a chance that Fish Mooney will become the Joker?

I know it sounds crazy, but they've spent so much time establishing Fish that I'd be sad to see her go. It would be fun to see her stick around and become Batman's greatest foe. But first, let's throw out some obvious caveats: the Joker has always been a male character. He has a female accomplice, Harley Quinn, but none of the various interpretations of the Joker have ever had him as a woman. And aside from Tim Burton's Batman, Joker doesn't usually have ties to crime families.

But Gotham occasionally comes up with rare, good ideas, and keeping Jada Pinkett Smith in the cast playing the Joker would be a really strange one, but kind of fun. Plus, there are more than a few hints that Fish Mooney would make a pretty interesting Joker...

Fish dresses in elaborate, theatrical costumes that are so rich and fantastical that no actual club owner would be willing to wear for an afternoon auditioning singers or going over the budget. If she became a homicidal clown, I can easily see her as the type to wear a purple, patterned suit. And she already has an unconventional hair color — why not trade in the red tips for some green?

Her Choice of Weapons

Fish has a penchant for turning accessories like the brooch Oswald bought for her into implements of violence. The Joker is known to hide his weapons in clownish accessories as well, especially in Batman: The Animated Series, where he would frequently use hand buzzers, lapel flowers, or toys to hide guns or poisonous gases.

This Warehouse Could Be Her Origin

Gotham recently mentioned "Indian Hill," a chemical treatment plant that was given to Falcone from Sal Maroni, Penguin's new boss. Indian Hill might end up being the place where the Joker is exposed to deadly chemicals and emerges as a twisted super villain with a deformed smile.

The Joker is known to be a madman, suffering from a psychotic, deranged nihilist glee. And while Fish has a good grasp on reality for the moment, she might not be able to hang onto it if her plans fall apart.