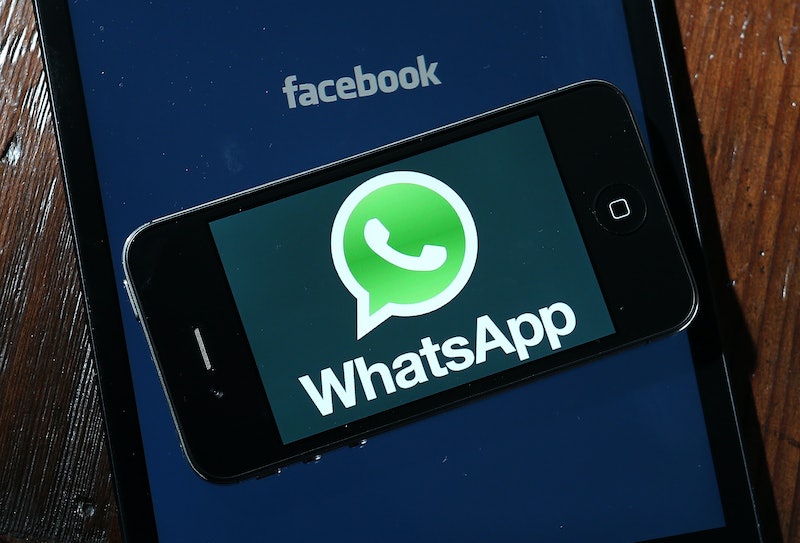 What makes a happy marriage? Openness, honesty, love and mutual respect? With a dash of reasonably priced food delivery thrown in, perhaps? Frankly, it might be easier to figure out the things that don't make for a happy marriage — like free text messaging, apparently. According to the Italian Association of Matrimonial Lawyers (IAML), Nearly half of Italian divorces cite WhatsApp, a startling figure for anybody with lifelong commitment on their mind and a smartphone in their hands. Think before you download, maybe?

As detailed by The Independent's James Vincent, the massively popular free messaging app has had a pronounced impact on the landscape of Italian marriage and divorce. In case you haven't used it before — I admit I've never had the occasion — WhatsApp is an extremely popular cross-platform messaging app, connecting users around the globe with wifi-based messaging. It's a hot property, having been bought out by Facebook for a whopping $19 billion in October, and it boasts an international following — it boasts over600 million active accounts, including more than 70 million in India alone.

Anyways, it's not exactly rocket science whats going on — Italians are managing their extra-marital affairs through WhatsApp, and they're getting caught. Gian Ettore Gassani, the president of the Italian Association of Matrimonial Lawyers, told the The Times (UK) that WhatsApp has empowered a new generation of swinging adulterers.

Social media has boosted betrayal in Italy by making it easier, first through texting, then Facebook, and now WhatsApp ... Lovers can now exchange risqué photos of themselves, and we have seen adulterers using the service to maintain three or four relationships – it’s like dynamite.

The natural consequence of this is that the resulting digital paper trails are being poured over in Italian divorce courts the country over. Gassani even went so far as to dish out some advice to would-be Italian cheaters, a rather odd gesture, urging them to silence those ringtones if they're expecting any messages from secret lovers.

My message to adulterers is, ‘Be prudent’, since if it makes betrayal easier WhatsApp also makes it easier to be caught. Spouses often become suspicious when they hear the beep of an incoming message.

Actually, if you're the sort of person looking for a highly discreet, secret affair, WhatsApp might actually be a notably bad option. According to the Electronic Frontier Foundation, WhatsApp is one of the least-secure messaging apps available, as are those of Facebook and Google. Maybe someday we'll reach the point where the truly next-level cheaters will just start sending each other letters through the mail. Who would ever think to check?

More like this
Taylor Swift, Kerry Washington & More Speak Out On Uvalde Mass Shooting
By Jake Viswanath
Photos Of Boris Johnson Drinking At A Downing Street Lockdown Party Have Surfaced
By Bustle UK
Rebekah Vardy & Coleen Rooney’s Trial Has Officially Begun
By Bustle UK
How To Support Gun Control Reform Right Now
By Morgan Brinlee and Carolyn Steber
Get Even More From Bustle — Sign Up For The Newsletter