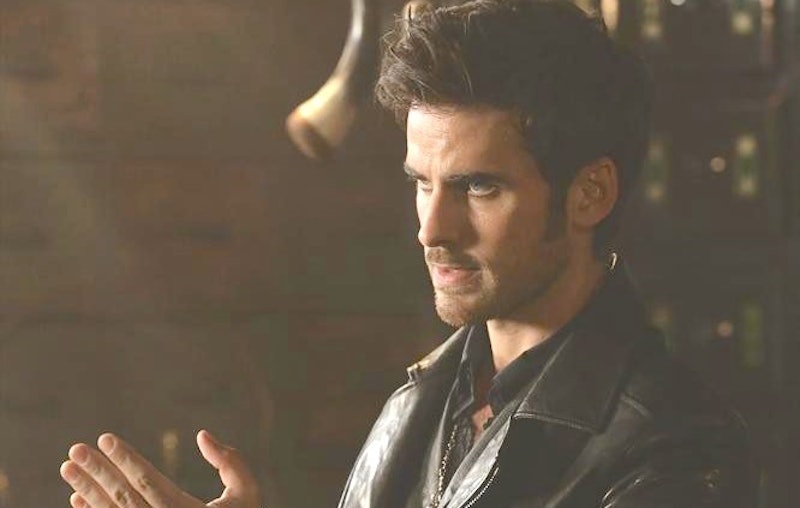 This is just downright cruel and painful punishment, even if I did see it coming. I've been wondering all week if Rumplestiltskin will kill Hook on Once Upon a Time and, on Sunday night, the ABC series revealed that he would. But it won't be anytime soon, so don't start thinking about walking the plank just yet, Captain Swan fans. Sunday night's two-hour episode, "Smash the Mirror Part 1 & 2," revealed that Rumple is going to kill Hook — in due time. And, unfortunately, our favorite pirate has no "leverage" left. But his role in Rumple's grand plan to escape from the mercy of the dagger has absolutely nothing to do with The Snow Queen's acquisition of Emma. So, here we are, running out of possible ways this situation could end well.

I was convinced that setting Hook up to die was The Snow Queen's way of getting Emma to fall into her idea of having the perfect family. Well, Hook's involvement in this situation as nothing to do with crazy Aunt Ingrid at all — but it has everything to do with his relationship with Rumplestiltskin's wife. On Sunday night, Hook realized that Rumple helping Emma to get rid of her powers was absolutely not about helping her and all about Rumple being shady as hell. But, when Hook went to his new house to try to stop Emma from going through with it, Rumple got to him first.

Part of the spell to release Rumple from the dagger's control is to accumulate enough power to cast the spell he needs for his freedom — the other part requires a heart. And not just any heart, the heart of someone who knew Rumple before he became The Dark One. Who's the only person in Storybrooke that's known Rumple that long? Well, Hook of course. On Sunday night, Rumple revealed to Hook — while he had him tied up to his fence — that he needs his heart for the spell before he took it out of his chest. YEP, THAT'S RIGHT, PEOPLE — RUMPLE HAS HOOK'S HEART.

But he won't kill him right away — because Rumple couldn't get Emma's powers into the Sorcerer's Hat, he's now charged Hook with gathering the magic instead. And, yes, he can do that now because, with Hook's heart in his hands, Hook has now become his puppet. We might be getting more time with Hook on OUAT, but this isn't the Hook we know and love and we probably won't get to see him again before Rumple tries to take his life to selfishly free himself from the bargain he willingly made.

Is anyone else starting to get tired of Rumple bringing everyone down all the time? Because I am, especially when it means that we're going to lose Hook in the process.

More like this
'Obi-Wan Kenobi' Takes Place After This Key Star Wars Movie
By Arya Roshanian
Eleven Turns To An Unlikely Source To Regain Her Powers In Stranger Things 4
By Brad Witter
The Grey's Anatomy Season 18 Finale Finally Revealed If Japril Got Back Together
By Brad Witter
'Gentleman Jack’s Cast & Crew Are Keen On Season 3, Too
By Frances Stewart
Get Even More From Bustle — Sign Up For The Newsletter