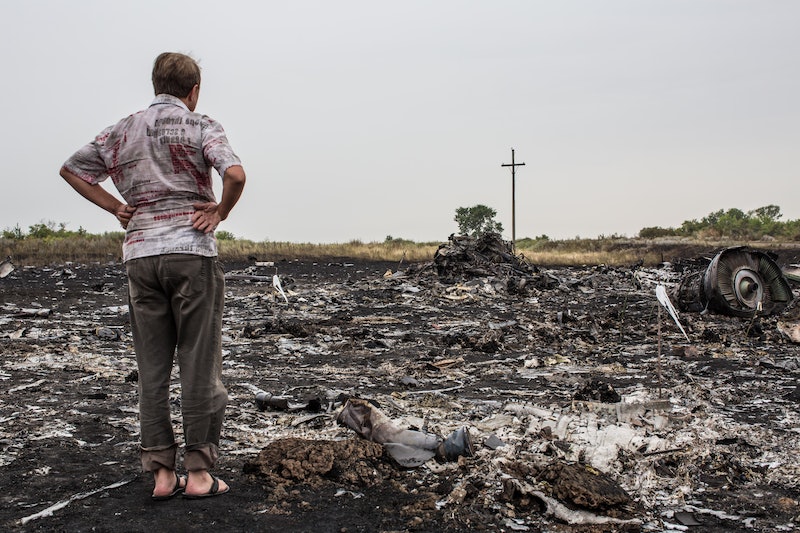 New footage of the immediate aftermath of the crash of Malaysia Airlines Flight 17 has surfaced. The cell-phone footage follows the citizens of Donetsk as they go check out the crash site. The plane appears to have recently crashed, because there’s an epic amount of smoke, and the wreckage had caught on fire. The people in video appear understandably confused and terrified, asking if there’s only one plane and where to get water. Clearly, the footage is quite upsetting and difficult to watch.

The crash, which occurred July 17th of this year, indicated that tensions between Ukraine and Russia had gotten out of control. Although Russia continues to deny it was their missiles that shot the plane down, it’s been presumed that the crash was caused by pro-Russian separatists.

The entire incident, in case you blocked that bleak incident out of your weary brain, was tragic beyond belief. Not only did no one take the blame, but it took days before anyone did anything about the flight’s passengers. Footage of the townspeople of Donetsk wandering around and examining the victims was spewed all over the Internet —wherever you clicked, you were bound to run into a rogue photo of a torso or limb. To add insult to injury, it was reported that Ukrainians were actually looting from the crash site, stealing money, clothes, and makeup. It was a pretty dark summer, especially since Malaysia Airlines Flight 370 had disappeared just a few months before that.

The Dutch Safety Board is allegedly still investigating the incident and there should be a final incident report sometime in 2015.