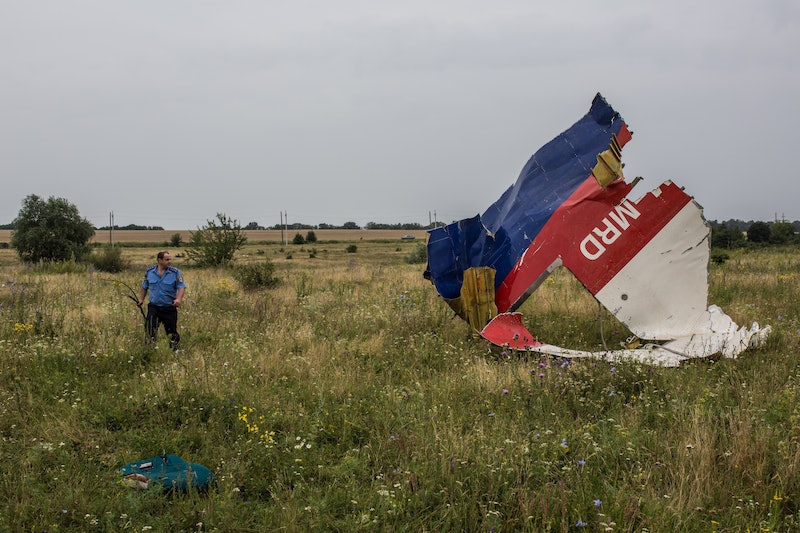 A new discovery in the investigation of Malaysian Airlines Flight 17 opens up more questions than answers. According to Dutch prosecutors, an MH17 passenger was wearing an oxygen mask when the ill-fated flight crashed in the Donetsk region in eastern Ukraine. This clue, which was announced on Wednesday by Dutch Foreign Minister Frans Timmermans, is a puzzling reveal in the already controversial crash.

Timmermans disclosed the tidbit during an interview on a Dutch TV talk show. When making an emotional speech about the MH17 passengers' final moments, the foreign minister said the discovery that a passenger was wearing an oxygen mask indicates, "there was time to do that." Dutch prosecutors later confirmed that an oxygen mask was found around a passenger's neck, suggesting it was on during the crash.

Did you know that someone was found with an oxygen mask over their mouth? That means someone had the time to do that. We cannot rule that out.

Malaysian Airlines Flight 17, which departed from Amsterdam with 283 passengers and 15 crew members on board, crashed on July 17 near Torez in Donetsk Oblast, a pro-Russian separatist-controlled region that has been fraught with violence and unrest for the last six months. All 298 people onboard were killed; a majority of the passengers and crew were Dutch nationals.

It was initially thought that the commercial plane was shot down by the pro-Russian separatists with a ground-to-air missile. A preliminary report released by the Dutch Safety Board in September concluded that MH17 was struck by "high-energy objects" that punctured the aircraft from the outside, indicating the objects did not come from inside the plane. The report stated that the damage incurred led to the break-up of the plane in midair. It did not say who was responsible for the crash, but found that these objects likely came from the ground and not the air.

Although Foreign Minister Timmermans said a passenger had time, presumably, to put on an oxygen mask, the Dutch Safety Board found that MH17 wasn't in obvious distress right before the moment of impact. According to the report, no distress calls or signals were made to air traffic control before the crash, nor were there any engine or aircraft system failures. The investigators also couldn't find any evidence of human error. However, the report was just preliminary, and investigators emphasized that more research was coming.

According to The Wall Street Journal, investigators are looking into the passenger wearing an oxygen mask. With this new information, they will figure out where the passenger was sitting at the time of impact, and compare the final location with the map of scattered debris in the area. Looking into the debris pattern may help investigators chart the plane's break up and subsequent crash.

The Guardian added that relatives of the passenger, who was an Australian national, were alerted about the oxygen mask when it was first discovered. However, families of the flight's other victims didn't know about it until Timmermans' Wednesday interview.

According to BBC News, aviation experts believe MH17 broke up too quickly for the passengers to understand what was happening. Dutch investigators also stand by their conclusion that MH17 endured "an in-flight break up," and that the plane likely disintegrated immediately.