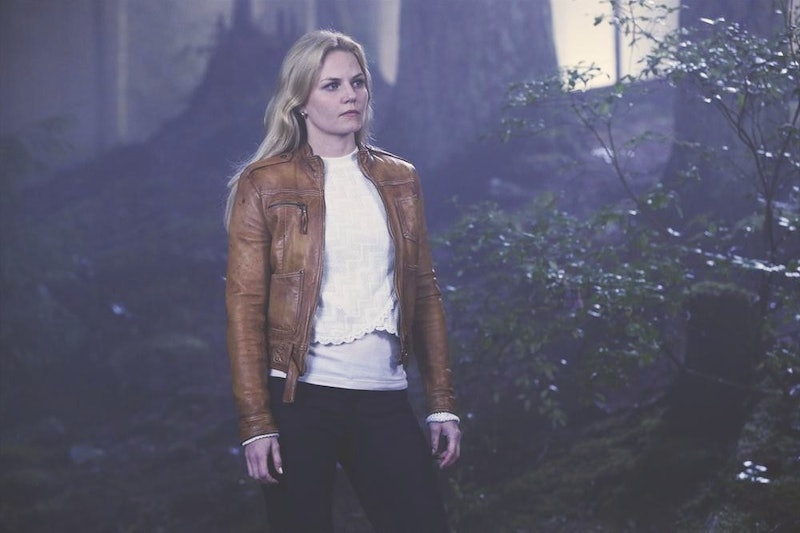 The Savior lives to fight another day! Not that I had any doubt in my mind that Emma Swan would come to her senses and realize that there was no reason to conform to society. I mean, look at Regina — she was straight-up evil and she's figured out how to make it work. On Sunday night's "Smash the Mirror," Emma decided to keep her magic on Once Upon a Time and all was right in the world. Well, until we realized that, somehow, even when things don't go The Snow Queen's way, they go her way. She must've wracked up a lot of good luck during that time she spent stuck in the urn, lucky ice witch.

Again, I didn't expect Emma to give up her magic. Mostly because, if she did, Storybrooke would probably implode and everyone would die without her being able to save them all of the time. But, I also didn't realize that The Snow Queen is a better villain that even Rumplestiltskin these days. Rumple turned up in The Snow Queen's ice cave where he tried to beat her at her own game by revealing that he was going to trap Emma in the Sorcerer's hat so he could use her magic to rid himself of the dagger. Well, that just wasn't going to happen.

Elsa convinced Emma not to give up her magic and, in turn, Emma embraced her powers once and for all. Which, apparently, opened up the door for The Snow Queen to link herself to Elsa and Emma as "sisters" with the yellow ribbons she bartered for during last Sunday's episode. Simply put, Emma decided to embrace her powers and herself and now she's damned Storybrooke to turmoil. Earlier in Sunday's episode, The Snow Queen revealed, in a flashback, that the only way to cast the Spell of Shattered Sight on an entire kingdom of people at once, is to possess some serious magic.

And now she does — after Emma's decision to embrace her powers and seeing her and Elsa support each other like "sisters," she magically put the yellow ribbons on their wrists. Those little trinkets, apparently, cannot be removed and they're providing an endless flow of magic to The Snow Queen and her magic mirror. So, it's only a matter of time before the Spell of Shattered Sight hits Storybrooke and everyone starts killing each other. Just when Emma thought she'd finally gotten her life together.

More like this
The 'It's A Sin' Creator Revealed A Massive Detail That Didn't Make The Final Cut
By El Hunt
'Obi-Wan Kenobi' Takes Place After This Key Star Wars Movie
By Arya Roshanian
'Gentleman Jack’s Cast & Crew Are Keen On Season 3, Too
By Frances Stewart
Grey's Anatomy Fans Refuse To Accept Kaimelia's Shocking Relationship Update
By Brad Witter
Get Even More From Bustle — Sign Up For The Newsletter