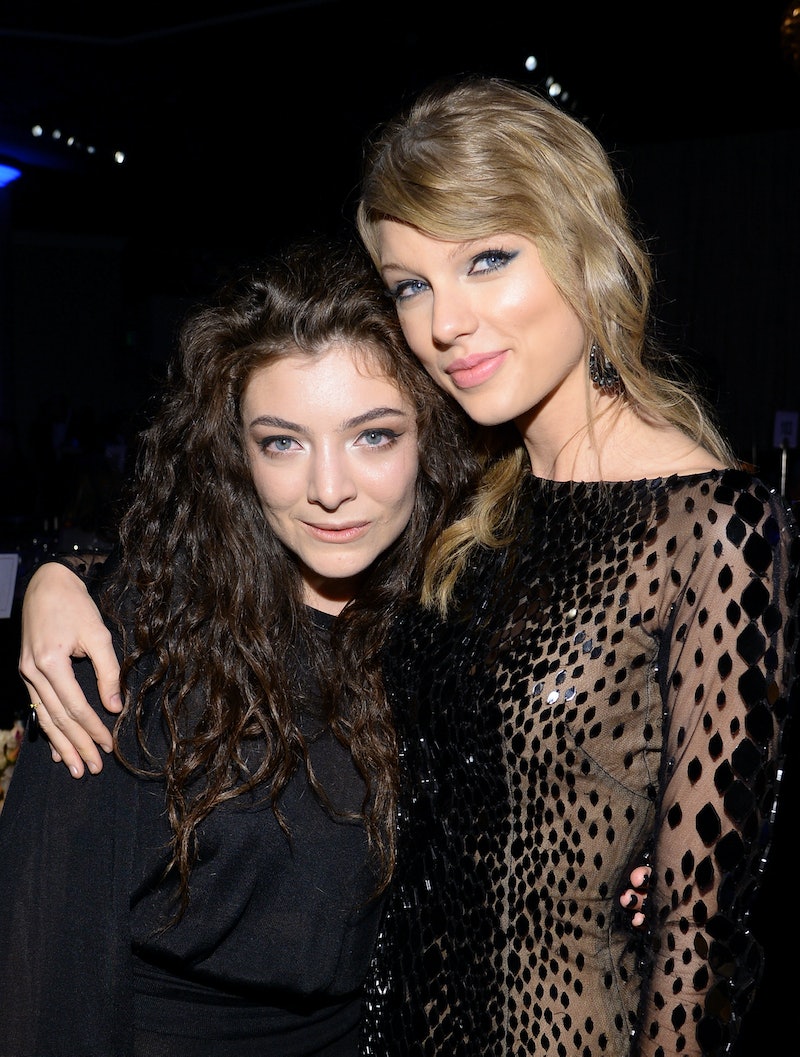 Listen, I don't know why Diplo has suddenly decided that he needs to unleash a volley of "comedic" insults at Taylor Swift lately. Honestly, I don't. Sure, we traced the history of the Swift and Diplo feud, but the history is that there is no history. This came out of nowhere, unless this a random branch growing from the "Bad Blood" tree that is Swift's rumored feud with Katy Perry. So, basically, at best, Diplo's tweets are a result of the rumored relationship he has with Perry who is rumored to be feuding with Swift — and none of that is confirmed. So, believe me, I hoped that Lorde's incisive comment in response to him would be the end of it and was severely disappointed when Diplo attacked Lorde and Swift again.

The comments were made via Diplo's Twitter on Friday. The musician responded to Lorde's comment by retweeting it to mock her age, something that I found particularly exasperating considering his own actions. I mean, yes, Lorde is 18 years old. As far as I'm concerned, that gives her an excuse for the immaturity of her comment. Diplo is 36 years old. What is his excuse, both for this feud and for the fact that he started one with a 24 year old and a teenager?

Naturally, that couldn't be the end of it. Diplo went on to link to an Instagram photo with the caption, "New album cover : MY D**K GETS MORE HITS THEN TAYLOR SWIFT," and to post a screengrab of Swift's tweet about her own behind — as if the fact that she can talk about it means that he can discuss it at his leisure. He finished with a snide remark about how he and Lorde had collaborated together on music together for The Hunger Games soundtrack — you know, when she wasn't busy bodyshaming him. And, quite honestly, none of these remarks are deserving of any more response from Lorde or even a first response from Swift.

However, I am neither of those women and so allow me to respond. In the first place, just because Lorde has worked with Diplo in the very recent past doesn't mean that she approves of him attacking her friends. Diplo had never insulted Swift until the very recent past, so sorry if she has a negative view of your working relationship after this. In the second place, this could cause some "Bad Blood" between Lorde and Diplo as well, because right now it seems unlikely that Lorde would want to work with him on any other collaborations in the future.

In the third place, and this goes without saying, but I don't feel that Diplo is in a position to complain that Lorde bodyshamed him when he not only bodyshamed Swift but also went so far as to send his followers to a page to donate money to enlarge her butt. There's bodyshaming and there's bullying and Diplo did both long before Lorde ever fired it back his way in defense of Swift. Don't get me wrong. Bodyshaming isn't okay in any circumstances, but doing it in response to receiving it and in defense of a friend is a far more noble reason than Diplo's initial random tweet that took the world by surprise. And, as he himself said, Lorde is a high school student. She has plenty of time to grow out of this behavior whereas he should really know better. Quite honestly, if anyone should be ashamed of how they're handling this situation, it should be Diplo.

More like this
Taylor Swift Is "Spiraling" After Releasing "This Love (Taylor's Version)"
By Jake Viswanath
This Is How Taylor Swift Feels About Joe Alwyn’s Steamy New Series
By Alyssa Lapid
Joe Alwyn Just Shared The Sweetest Taylor Swift Memory
By Sophie McEvoy
Spice Girls’ Net Worth: The Richest Member Is Wealthier Than The Rest Combined
By Hugh McIntyre
Get Even More From Bustle — Sign Up For The Newsletter