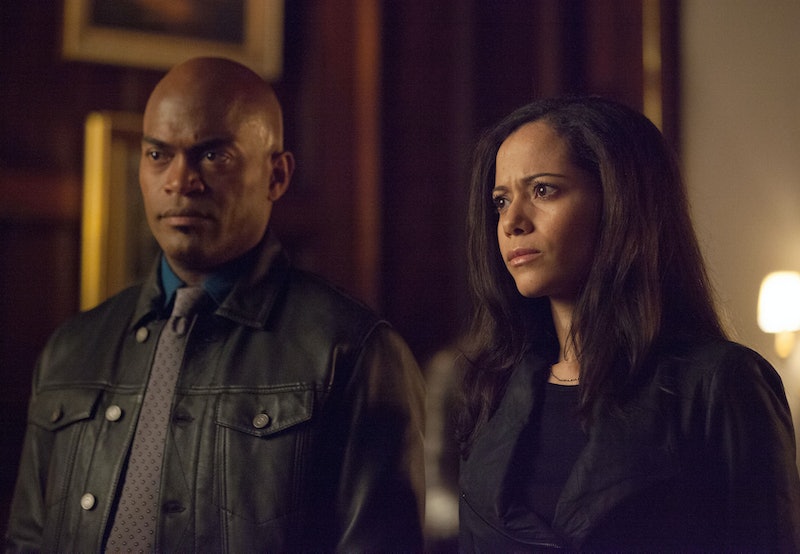 If there's one thing for absolute certain that I've learned in the short time that Fox's Gotham has been on the air, it's that every last character is important. Whether you notice a person observing ongoing action or notice a random character with one line, either of those people could easily become a major DC hero or villain. Take Bruce Wayne's bullies from last Monday's episode "The Mask": The main tormentor, Tommy Elliot, got his lights punched out by Bruce at the end of the episode, making way for Bruce's desire to learn how to fight from Alfred. What could easily be misconstrued as a one-off character will one day become super villain The Hush. So what about a character like Montoya's partner Crispus Allen? Allen hasn't had much screen time to really be a well-known presence but could there be a very specific reason for this? Could Crispus Allen become The Joker on Gotham?

While I'm leaving towards no, it's actually a bit of a toss up. On a show like Gotham (one that has a very well-known and well-written cannon similar to The CW's Arrow or The Flash) it's difficult to really surprise viewers when they know which characters will one day create either good or evil alter egos. So what can they do? They can deviate from the most obvious plans. So while you DC Comics fans probably recognize the name Crispus Allen, he may not turn out to be the character you expect or hope. Though thinking that Allen could become The Joker might be a bit of a stretch.

For those who are unaware of Crispus Allen's comic book story, he was written pretty similar to what he is on Gotham: a cop who is partnered with Renee Montoya. In the comics, Allen saves his partner from a shooting by killing the shooter. After he is put on leave pending an investigation into the totally legitimate shooting, a crime scene investigator Jim Corrigan hides evidence corroborating Allen's story. Eventually the information is found and Allen's police status is restored. But during his own investigation into Corrigan's other wrongdoings, he is shot and killed by the corrupt crime scene tech.

Allen then gets visited by the Spectre, an entity determined to judge and punish those who commit terrible crimes, and after some convincing and some time, Allen allows Spectre to inhabit him. They then become vigilantes of sorts and Allen even learns Batman's identity.

I genuinely hope the Gotham writers and creative team do not decide to turn Allen's comic book origin on its head, because his original storyline is just so damn cool. It would be fascinating to see Allen and Montoya eventually become their alter egos of The Spectre and The Question as the DC comics do a great job of showing how those who uphold the law either shirk their civic duties or love up to them even stronger once they take on a separate identity.

Plus, because The Joker doesn't technically have an official origin story, I've always liked to think of him as being around the same age as Batman so that his torturing of Bruce is lifelong. Allen feels a bit too old (when compared to Bruce that is) and a bit too moral to eventually become The Joker, unless he suddenly goes through a psychotic break or something else extreme happens. He's seen the corruption in Gotham City and seems to actually want to put a stop to it despite butting heads with Gordon, the ultimate force of good in the GCPD, in order to do it.

While Bruce's school bully Tommy may not be The Joker, perhaps one of Tommy's cronies could become the arch-nemesis we all love or love to hate. In some stories, The Joker begins as the masked villain the Red Hood before he has an accident thanks to Batman and becomes The Joker. He could easily just look like everyone else and could have even been a rich prep school kid like Bruce. Or even better, maybe we haven't met The Joker yet. I hope this is the case, because why bring in the main event when the everything leading up to it has been so damn fun to watch?