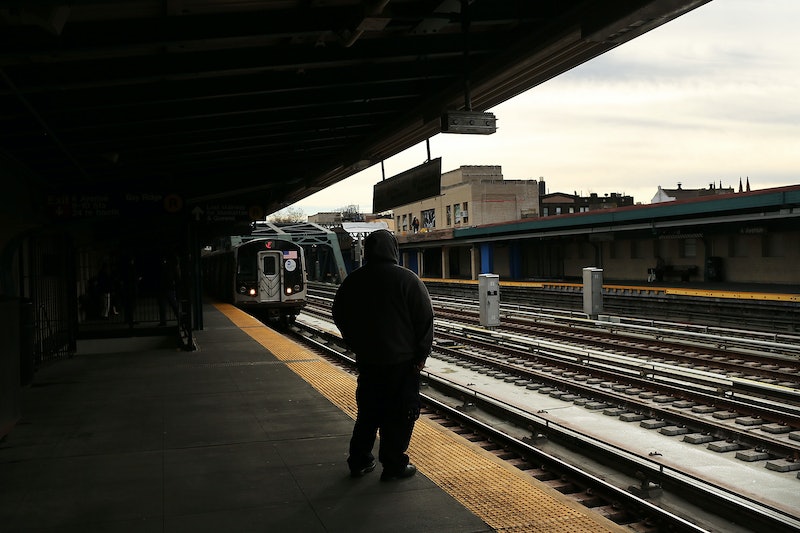 On Sunday morning, a man was pushed onto the New York subway tracks and killed by a D train, adding to the growing list of incidents in the last few years. It's one of the most heinous crimes anyone could ever commit, partly because it's chillingly easy to execute. And it's every New Yorker's worst nightmare.

An unidentified man pushed 61-year-old Wai Kuen Kwok onto the tracks at the Grand Concourse and East 167th Street station in the Bronx just before 8:45 a.m. According to police, nothing was stolen and eyewitnesses did not observe any confrontation between the victim and the assailant. All signs point toward a totally random, senseless attack made by one stranger on to another — deliberate and cowardly.

Kwok had been standing on the platform with his wife as they waited for the D train to go for breakfast in Chinatown, a weekly tradition for the couple. Kwok's son, Gary Kwok, a doctoral student at Adelphi University who lives with the couple, told the New York Times, "Please tell the world he is a fine, regular family man."

Kwok isn't the first to have senselessly lost his life to such an act. Last April, a man was pushed to his death by a homeless person after engaging in a verbal argument. In December 2012, an Indian immigrant named Sunando Sen was pushed onto the tracks by a woman, Erika Menendez, who claimed she "wanted to hurt Muslims and Hindus ever since [9/11]." That same month, a Queens man, Ki Suk Han, was pushed onto the track of a Q train at the 49th Street station.

The frequency and ease with which these incidents happen should inspire everyone to be more aware of their surroundings when commuting. Anytime there are crowds of people rushing somewhere, tensions can run high and accidents are likely to happen, making the subway platforms — especially at rush hour — precarious places. Here's how you can arm yourself against falling victim to the tracks.

Always be aware of your surroundings, whether that's the people around you or any objects that you could trip over. Even if the people around you are engaging in an argument that has nothing to do with you, you don't want to become an innocent casualty by getting accidentally pushed. Take your nose out of your book, turn down the volume on your headphones, and keep a keen watch over what's happening around you when waiting for a train.

Don't Stand Too Close to the Edge

The MTA recommends standing before the yellow section at the end of the platform, but do yourself a favor and stand even farther back. It's the simplest adjustment to make and it could mean the difference between getting pushed onto the tracks and being able to get away. Again, accidents happen, so stand far enough away from the edge that you don't get unintentionally shoved onto the tracks.

Stand Against a Wall or Pillar

Whenever you can, stand against something if it's situated far enough away from the edge of the platform. Most assailants choose easy targets who are standing open and vulnerable near the edge so that they can just shove and run.

If You See Something, Say Something

Like the MTA slogan goes, if you see someone starting trouble with others, report them. Unfortunately, New York City has no shortage of mentally unsound and unpredictable residents, and you can stop them doing something crazy by telling the authorities.