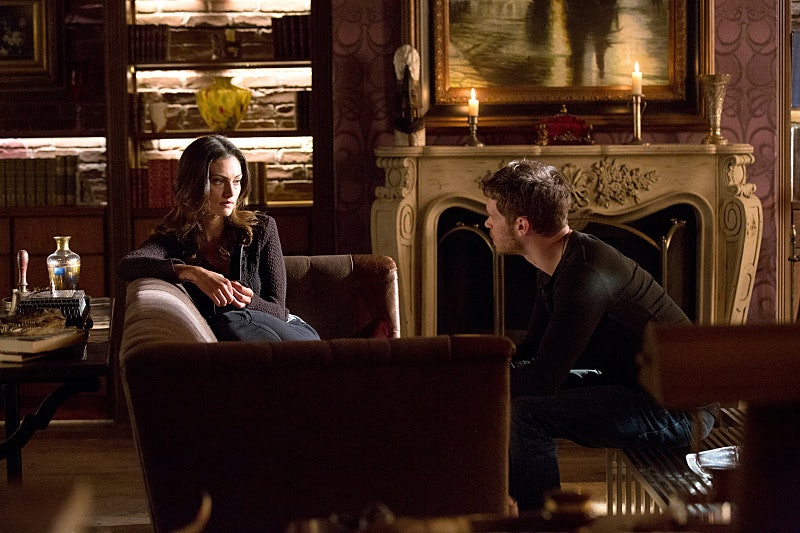 I know there were other Originals fans out there as confused as I was last Monday night. Why, you ask? Well, how is it that the most powerful witch in this world and the next didn't know that she'd failed at something so huge? Last week's Originals episode, "Wheel Inside the Wheel," revealed that Esther thinks she killed Klaus' daughter on The Originals — thus, saving everyone from her evil sister's wrath. But we all know that she didn't do that, right? I mean, I know you caught up on The Originals Season 1 before Season 2 began. You also obviously know that Hope is living with Rebekah behind a white picket fence somewhere, which is both good news and bad news for our Original vampire friends in New Orleans.

First, let's take a look back at The Originals Season 1. During the finale episode, "From a Cradle to a Grave," Hayley was attacked by the witches, almost died, and Hope was born and almost killed. Which essentially gave Hope Mikaelson the most traumatic first moments of life ever to occur in the history of the universe. Thankfully, however, she has some great and resourceful parents, aunt, and uncle. The Original crew decided that it'd be safest for Hope if they were to fake her death and pin it on Marcel (who still lives with that guilt, by the way). And so they did.

In the final moments of the episode, Klaus sent Hope off to live with Rebekah, far away from New Orleans and its supernatural turmoil, until he could get the Quarter back in order so that she could return.

That brings us to The Originals Season 2 where, apparently, Esther has no idea that she failed in guiding the witches to kill Hope. However, while this is a good thing — because Hope is alive and well somewhere with Rebekah — this is also a really, really, really bad thing, now that we know about Esther's Rumplestiltskin-like sister, Dalia.

So, here's the good news — Hope Mikaelson is alive and well, which is really great because infant sacrifice is too much for me to handle during my supernatural dramas. BUT there's some extremely bad news and that's that Dalia is coming. Last Monday, Esther revealed that she made a deal with Dalia so that she could bear children. Her witchy sister obliged but, because all magic comes with a price (there's our Rumple from Once Upon a Time again), Esther owed her something in return — her first-born child and the first-born children of all of her children. Yes, that means that Esther is totally unprepared for the fact that Dalia is coming for Hope and, possibly for her as well because Klaus really pulled a fast one on her this time.

Dalia undoubtably knows that Hope is alive and that Klaus procreated because, in those two, short flashbacks on Monday night, she revealed herself to be far more powerful than Esther. Now it's only the question of when exactly will Dalia come to claim Hope? Well, potentially, very soon.

Spoilers for The Originals Season 2 reveal that Claire Holt will return in the Nov. 24 episode, "The Brothers That Care Forgot." And it won't be for a happy reason — the synopsis for the episode reveals that Esther has finally discovered her daughter's whereabouts and she's coming for her, perhaps to coerce Rebekah into giving up her immortality or perhaps because she's realized that Klaus' baby is actually alive.

Either way, nothing good can come of Esther pursuing Rebekah's location nor the Original Witch finding out that Hope is actually alive. The Original siblings have more than enough problems without dealing with Esther making a second attempt on that baby's life — not that I believe she has a chance with Hayley on her heels, vowing to make her life a living hell. Unfortunately, as usual, all good news is accompanied by apocalyptic news on The Originals, meanwhile I'm over here trying to will Hayley and Elijah back together for good.