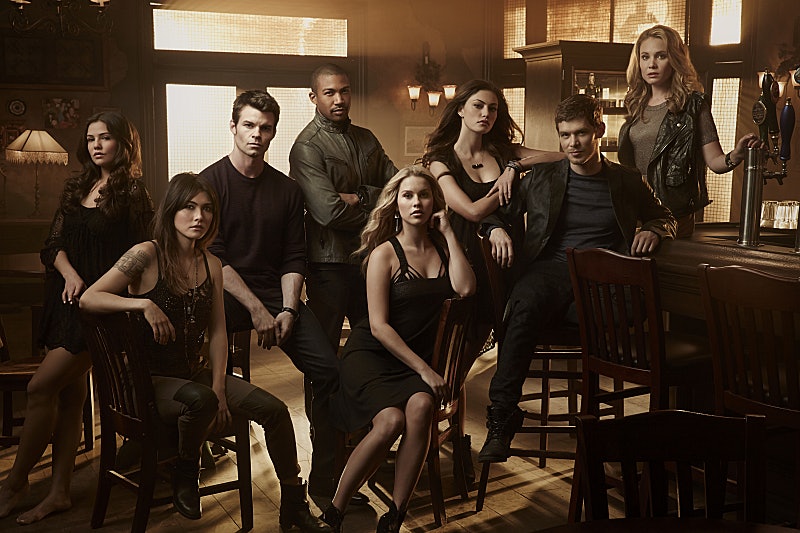 It might be called the Big Easy, but as The Originals Season 1 has proven, life down there is pretty much anything but. It’s always hard to say how a spin-off show will do, but this Vampire Diaries spinoff (turned counterpart) — which centers around the Mikaelson family — has more than delivered a supernaturally-fueled good time. Klaus, Elijah, and Rebekah find themselves back in their previous home of New Orleans, which is now under the control of Klaus’ former protégé, Marcel. Klaus is immediately jealous of Marcel’s power and the loyalty he receives from his followers. He vows to oust Marcel from his throne and reclaim the city that was once rightfully his. Which is exactly what the witches want.

Tired of being enslaved by Marcel’s control, a select coven of witches in town provide Klaus with a little extra incentive to send Marcel packing. They threaten the life of Hayley, who — guess what! — is pregnant with Klaus’ baby. That’s right, folks — Klaus is about to become a daddy. However, the events that follow send these supernaturals on a collision course of betrayal, mayhem, and lots and lots of bloodshed. Welcome to New Orleans, everyone, where the music flows almost as often as the blood! Now everyone grab their White Oak Stakes and let’s dig in to what went down in Season 1...

Unfortunately, this is not as dirty as it sounds. We discover that the reason Marcel is able to keep the witches in check is because he has an ultra-powerful young witch at his disposal. Meet Davina: a witch who, along with three other girls, was supposed to be ritualistically sacrificed to the ancestors during a ceremony called the Harvest Ritual. (Note: they would’ve been resurrected afterward.) However, thanks to Marcel’s interference, she escaped as the only survivor and absorbed all of their power, leaving the ritual incomplete. And if gone undone, the witches could eventually lose all of their powers, which leaves Davina with a pretty big target on her back and in need of Marcel's protection.

Hayley Finds A Pack of News

When she’s not too busy having her life threatened, Hayley finally learns more about her family history. After coming across a pack of wolves in the bayou, she discovers that her parents were basically werewolf royalty down there, making her the main leader of the pack. The problem is they’ve all been put under a reverse-werewolf curse, meaning they can only turn human during the full moon and must remain in their wolf form the entire rest of the time. Luckily, they just happen to be in a town swarming with witches, so Hayley eventually gets the curse lifted.

But she isn’t the only one to stumble across some werewolf kin. News of Klaus’ unborn baby attracts a new pack of wolves that turn out to be descendants from Klaus’ biological father. The Bayou: reuniting supernatural families everywhere.

It turns out Elijah’s former girlfriend, Celeste, is a witch and has the useful ability of being able to resurrect herself into a new body every time an old one dies. However, she’s not looking for a reconciliation with a lost love — she’s looking for revenge on Klaus (because, who isn't?). So when the Harvest does, indeed, get completed (RIP Davina), Celeste arranges it so her own minions get resurrected instead of the four Harvest girls. She and the others make it so that Klaus and Rebekah become psychically linked, allowing him complete access into his sister’s memories… memories that include the time she and Marcel conspired against him back in 1919.

Realizing that Klaus would never allow their relationship to continue, Marcel and Rebekah hired a group of witches to locate Klaus’ father, Mikael, and inform him of his son's whereabouts, so that he could kill him, and leave Rebekah and Marcel free to be together. Naturally, a betrayal of this magnitude infuriates Klaus and he tries to kill them both. Thankfully, Elijah intervenes and he let’s Rebekah leave town in order to be free of him for good. Meanwhile, Marcel gets banished, though he shows no intention of giving up on trying to reclaim the city.

Eventually, Elijah ends up killing Celeste (for good this time), which, in turn, allows Davina to be resurrected. Unfortunately, she has a huge grudge against Klaus, who killed a guy she really cared about earlier in the season (because of course he did). As payback, she agrees to bring Mikael back to life. (Due to the Other Side falling apart over on TVD, Mikael was able to appear to Davina in ghost-form with the promise of ridding her of Klaus forever.)

Meanwhile, Cami’s uncle, Father Kieran, finds himself hexed by the witches, which eventually results in his death. But before he goes, he tasks Cami with guarding a secret room, filled with items that can be used against supernaturals if they ever get out of line.

No, this isn’t an inspirational metaphor for something. Hayley goes into labor during the season finale and ends up giving birth to a healthy baby girl that she and Klaus name Hope. So literally, Hope is born. However, it was a rather traumatic ordeal. One of Celeste’s witches, Genevieve, was ordered by the ancestors to kill the baby once she was born, which resulted in her cutting Hayley’s throat and stealing the baby immediately after the birth. But since Hayley still had her hybrid child’s blood in her system, she simply went into transition of becoming a hybrid herself. (Much to Elijah’s relief, who was utterly devastated at thinking he’d lost her for good.)

They are able to track down Genevieve, kill her, and with Marcel’s help, retrieve the baby. Hayley knows, though, that their daughter is still going to be in danger from other supernatural beings, so they decide to fake Hope’s death and temporarily send her away with Rebekah until it’s safe for her to return.

A Mother of a Surprise

Before her death, Genevieve confesses to Elijah and Hayley that Esther was the ancestor witch who set the whole plan in motion. And sure enough, later that evening two bodies get resurrected in the New Orleans graveyard. The male calls the female “mother” as the two of them stand over Esther Mikaelson’s tombstone. (We are to assume this is Esther and Finn in new bodies.) Let’s hope Klaus is ready for a family reunion this fall!