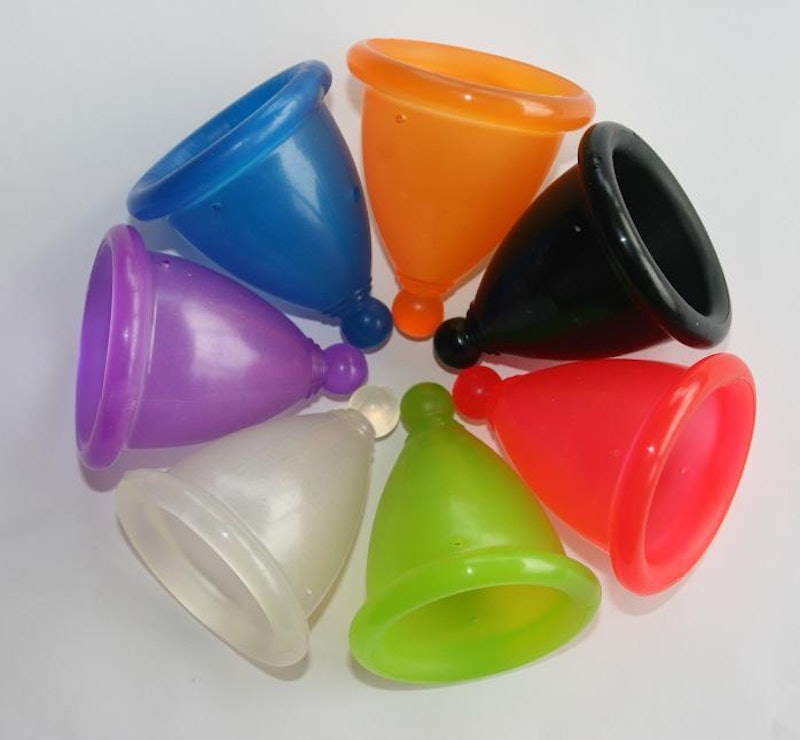 I'm sure that you've heard all the virtuous reasons that you should switch from tampons or pads to a menstrual cup — you'll save money, you'll help the environment, you'll get to know your mysterious little lady flower a little better — but you might be surprised to find out there are some other, weirder reasons to make the switch. Because while all those usual reasons are valid, they also make menstrual cups sound like the kale of the period product world — something that's good for you, but not particularly convenient or fun. This stereotype could not be more wrong, my endometrial lining-shedding friends — menstrual cups are convenient, comfortable, and ideal for the laziest and most absent-minded vagina-havers around. They are truly the ultimate in slacker period products.

If you're rolling your eyes and/or doing the "jerk-off" motion while you're reading this right now, know that I was once like you — I used tampons. I'd struggled with tampons since middle school — they seemed to always leak and irritate the inside of my vagina, no matter what I did — and never quite figured out how to wear pads in public after skinny jeans became a thing. But I thought a menstrual cup had to be a thousand times worse — if I was struggling with a tiny piece of cotton, how could shoving a contraption that looks like half of a turkey baster into my sexy bits be any better? I thought it was just another kooky health trend that my hippie friends were into, like avoiding refined sugar, or chiding me for eating Flamin' Hot Cheetos before 11 a.m.

But about six years ago, I worked at a store that sold Diva Cups, and saw how utterly devoted every woman who came in to buy one seemed to be. Surely they couldn't all be deranged, right? I used my employee discount, tried it for my next period, and never looked back.

Here are the six practical reasons you should consider switching over to a menstrual cup — and none of them require you to squat over a hand mirror, I swear.

YOU DON'T NEED TO REMEMBER TO PACK AN EXTRA

In my pre-cup life, I was the woman who was constantly wandering the halls of my office like a traveler who had lost her way, accosting any woman who crossed my path to see if she had a spare tampon. Because I was too scatterbrained to remember to pack a tampon half the time, and the office tampon machine was always broken (I have found that pretty much all tampon machines are usually broken), the first day of most of my periods were characterized by a hurried lunch hour trip to CVS, or an improvised pad made out of a quarter pound of layered office toilet paper. Neither option was a great way to start what was already the most annoying week of my month.

But with a menstrual cup, there's much less to remember. Since you wear a menstrual cup continuously throughout your period, and remove it only to empty and clean it every few hours, there's no chance of forgetting it when you head out somewhere where it will be hard to acquire or change a tampon (like, say, the beach, or a Van Halen concert). You only need to buy a new one once a year, so there's no need to run out and pick up a new one at the start of every period; and since you reuse it, there's no chance of getting your period early and being caught without anything to sop up your crimson tide.

YOU ONLY NEED TO CHANGE IT ONCE EVERY 10 HOURS

I am phenomenally lazy. Like "I am wearing stretch pants right now because I thought buttons were too much to deal with on a Monday" lazy. And cups are perfect for the lazy menstruator — on regular flow days, menstrual cups only need to be changed 2-3 times a day, and can even be left in place for 10 hours without leaking. On heavier flow days, they need to be changed a little more frequently, but they still hold one full ounce (around 28 grams of blood, which is a lot — we usually only produce two ounces of blood during an entire period). Your average tampon holds 6-9 grams of blood, which means a lot more time in the bathroom, trying to pull something bloody out of your vag. Since I am such an outspoken evangelist for cups, I get a lot of questions about whether they'll spill if you actually leave one in for ten hours. There are two parts to this answer: 1. you produce way less blood in any given day than you think, so the times that you actually fill your cup to the top are extremely few and far between; and 2. yes, if you get distracted and leave it in for ten hours while you're on a very heavy flow, the cup will fill up, and you toilet will look like the elevator from The Shining when you empty your cup out. But in six years of cup usage, this misfortune has only befallen me twice, and believe me when I say I am the most distracted person alive, and way worse at paying attention to anything than you are. So while a cup brimming with blood can be a risk, it's not a huge one.

IT WON'T DRY OUT YOUR VAGINA

It seems totally counter-intuitive that your vagina could feel dry while liquid is pretty much continuously pouring out of it, but that's what always happened to me with periods. The hormonal changes that occur during your menstrual cycle — primarily a drop in estrogen levels right when your periods starts — can lead to a dry-feeling vagina. Tampons can irritate a dry vagina, too — I spent many a pre-cup day wincing in my office bathroom, pulling out a tampon that seemed stuck to the walls of my vagina. Since a menstrual cup is made of silicone rather than cotton, it is less likely to feel "stuck" to the walls of your dry vagina— and since you change them less often than a tampon, it also cuts down on the irritation of taking things in and out of a dry vagina, too.

IT WON'T LEAK IN YOUR SLEEP

If you take the sheets off my mattress, it looks like someone committed a very sloppy and poorly planned murder on it. I've had it for about ten years, and in the first few years that I had it, nearly ever part of it got speckled with blood from tampons and pads that leaked while I slept. I'm a tosser and turner when I sleep, which meant that pads usually ended up balled into the back of my underwear, giving me a wedgie and letting blood drip through the front of my panties. And my tampons leaked through nearly every time I slept with them, even when my flow didn't seem that heavy. It seemed like no matter what I did, I was doomed to live a life of scrubbing blood stains out of my pajama bottoms in my bathroom sink at 7 a.m.

This is where I am most devoted to my cup — it cut sleep leakage out of my life. Since a cup works by creating a seal inside your vagina, in my years of using one, I have been spared the indignity of having to explain weird mattress blood stains to gentleman callers and/or waking up most mornings of my period with bloody underpants. Ugh, I feel gross even typing that.

IT MIGHT MAKE YOU FEEL LESS SELF-CONSCIOUS WHILE HOOKING UP

As a tampon user, I was extremely uptight about the idea of fooling around while I had a tampon in — the idea that the guy I was with might accidentally touch my tampon string while probing my lady bits just kinda weirded me out. Someone else touching my tampon string felt too intimate, but not in the good way — it felt more like the kind of intimacy based around bodily grossness that you have with your gynecologist. I would get distracted by the idea of it, and then would begin wondering if my tampon was leaking, and before I knew it, I just wasn't horny any more. I generally avoided a lot of sexual contact during my period for this reason, among others.

My switch to menstrual cups has totally turned things around for me. Not having to worry about my boyfriend accidentally yanking on my tampon string — or getting his hand covered in tampon leakage — has loosened me up significantly on the "third base while you're on your period" front. I do still take my menstrual cup out to have actual intercourse — although there is a line of menstrual cups that you can wear while having sex — but just knowing that I can jump into fooling around without having to worry about some weird hand-string contact (or take it out too soon and accidentally bleed into my underpants while we're making out) has been a relief.

IT DOESN'T GET PUSHED OUT WHEN YOU POOP

Okay, I should specify that this is just based on my own personal experience, not any kind of formal research — I've seen a number of women online say just the opposite, that pooping seems to squeeze their cup out of place. So this is just one vagina's tale. But, personally, using a cup has been a pooping-related game changer.

I used to constantly push my tampons out when I pooped — not all the way out, but into that awkward halfway-out position, where the end of the tampon is irritating your vaginal opening, and the top of the tampon is poking something sensitive, and everything is awful. That would lead to me then pulling out a half-dry tampon — which is also a special kind of ladybit torture — and then inserting a new tampon into my now irritated vag, making the entire situation a triple crown of vaginal unpleasantness. Since using a cup, I've had the rare occasion where I didn't insert it correctly beforehand, and pooping squeezes it into an uncomfortable position — but when it's inserted properly, I can't feel it, it doesn't move, and I can finally focus on the important things while pooping (i.e. reading a three month old issue of Us Weekly).