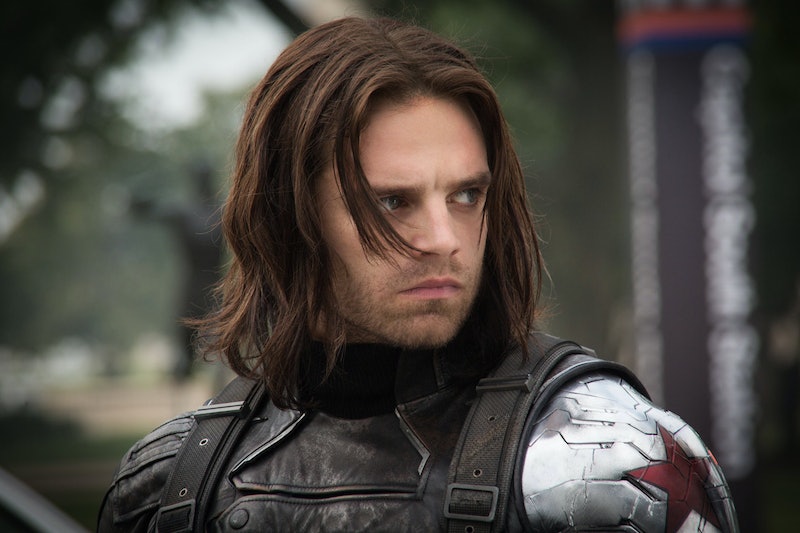 No, they can't. According to the Examiner, there are some reports floating around that claim that the Winter Soldier will play a "central role" in the Civil War event. Anthony and Joe Russo, who directed Winter Soldier, told MTV in August that the Winter Soldier had a key role to play in Captain America 3 , but their account didn't make the chance of him physically showing up seem very likely.

In light of the fact that we now know Civil War is coming, this account now makes it sound more like the Winter Soldier will cameo in the film as the central driving figure behind Steve's opposition to the Superhero Registration Act — possibly because the government refuses to register the Winter Soldier as a superhero. In fact, that could be the central role that Bucky Barnes, a.k.a. the Winter Soldier, plays in Civil War. Perhaps Bucky's registration means that just about every country in the world is clamoring for the Winter Soldier to answer for the horrific crimes committed while under Hydra's control, because, after all, the SRA is all about holding superheroes accountable for their actions. And, you know, thanks to the SRA, they all now know where he is and that he exists.

In the comic book storyline, the Winter Soldier didn't appear until after the events of Civil War — aside from a side adventure during the conflict in which he had his first Christmas since being unfrozen and unbrainwashed in the present day — and it was mainly to fail to save Steve from being assassinated. To make a long story short, Bucky ends up having to take up the shield of Captain America. It's possible that this might still happen, and that Captain America might die in Civil War, but the reports that the Winter Soldier will play a central role in the film could indicate that he's there as more than just an idea or a last minute hero. Considering the reasoning behind the events of Civil War have changed in the MCU, going from being triggered by the collateral death of schoolchildren to being triggered by the creation of Ultron, it stands to reason that Bucky's role might change in it, too.

In fact, if Civil War gets underway due to Bucky being found, arrested, and put on trial for his war crimes, that wouldn't surprise me at all. Winter Soldier was all about proving that Steve will do anything for his fallen friend, up to and including dying with him once the day is saved because he refuses to ever let Bucky go through anything alone. Their friendship is real you guys, whether Bucky can remember it at all. If the government takes Bucky in for crimes committed while brainwashed, that would be all the reason Steve needed not to side with them on the SRA, even if he could see the sense in it before. Not only is Steve pretty blind in his loyalty to Bucky, but he's also proven that he ain't scared of no government. Am I right, S.H.I.E.L.D.?

Marvel is keeping pretty hush hush about everything related to the film plot, up to and including whether or not Sebastian Stan has signed on to reprise his role as the Winter Soldier in it, but this gives me hope that the entire Winter Soldier storyline isn't just going to be dropped in favor of playing up the Iron Man vs. Captain America angle of Civil War. The second Captain America movie gave the fans certain expectations that they're not going to want to wait a few years to see pay off.