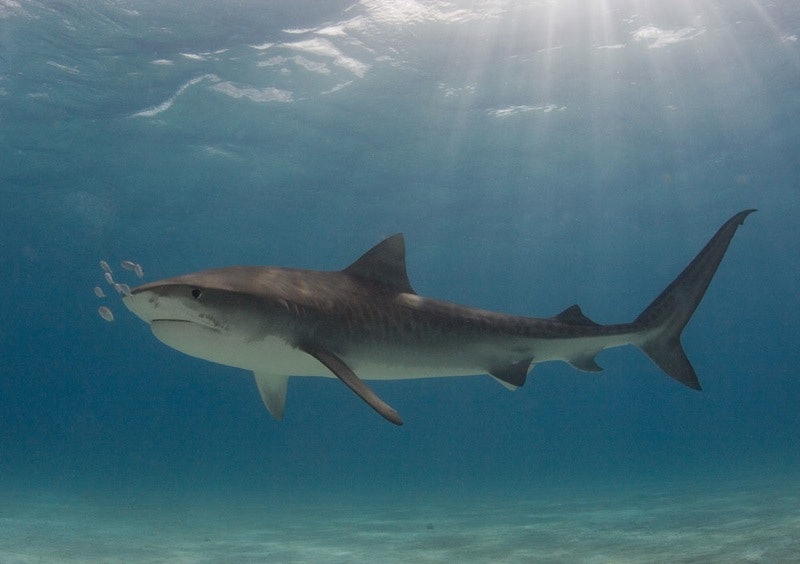 Hey, if they make a repellent for tiny bugs that make you itchy all over, then maybe it makes sense to develop a repellent for apex predators that can bite your limbs off whole. Just sayin'. Researchers in Cape Town have followed this logic and on Friday started testing a shark-repelling cable that emits an electronic current to keep the dangerous fish away. It's kind of like an invisible dog fence, except it keeps the sharks out instead of in.

Sounds like a violation against unsuspecting sharks, right? It's not, and here's the clincher: the electronic cable will actually end up saving more sharks. So it's for their own good — a win-win for everyone. It's the least we can do for encroaching on their territory.

The cable was installed by researchers at the KwaZulu-Natal Sharks Board, a service organization that protects beachgoers in the KwaZulu-Natal province form shark attacks. The 100-meter-long cable was attached to the ocean floor at Glencairn Beach where sharks frequent during summer months and features electrodes that emit low-frequency currents that have been proven to repel the predators.

When sharks approach the electronic field and feel the current, they turn away. Humans won't be affected by the electricity, however, and will only feel a slight tingling sensation at most if they touch one of the electrodes. The cable will be tested for five months, and if the results are positive, then similar technology could be used around the world to prevent shark attacks.

Besides reducing the number of attacks, the cable can also lower the number of shark deaths. For the last 50 years, South African beaches have relied on shark nets to prevent shark attacks, and while the contraptions have proven effective in protecting human swimmers, they've caused widespread damage to marine life. Not only do sharks die after getting caught in these nets, but other ocean animals get entangled too, including protected species like dolphins, whales, and turtles. Thus, an alternative like the repellent cable could prevent further damage to the ocean's precious ecosystem.

Everybody is 100 percent behind this project from the government to environmentalists, because this means we will have fewer sharks ending up dead from being trapped and tangled in the shark nets.

If the cable is truly an environmentally friendly solution to reducing the number of shark attacks while protecting marine life, then I'm all for it. Last year, there were 53 confirmed reports of unprovoked shark attacks in the U.S., with 24 of those coming from Florida coasts. Just this month, two kayakers were followed by a hammerhead shark for about two miles off the coast of Palm Beach. The shark was so close it even bumped into their kayak. I don't know about you, but that is way too close for comfort for me, and a little harmless shark repellent would be much appreciated in that type of sitch.