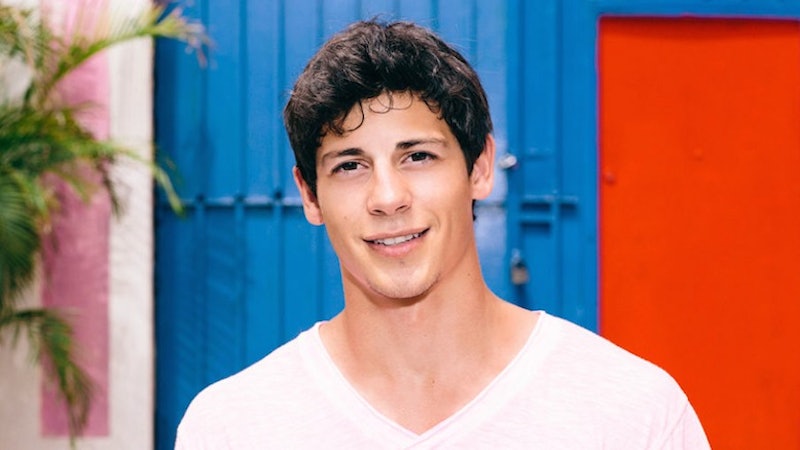 Is it just me, or is this season of MTV's Are You The One? way more intense than the first one? Of course, this could be coming from the fact that there's a girl in the house who acts as a second match to one of the guys, but I think a lot of it is because MTV did their damnedest to cast people who were in the mood to start something. At the center of all that drama is 25-year-old Brandon Tindel, and even if he didn't totally revel in it, he'd be the talk of the house anyway. He's been in the truth booth far more times than any of his new roommates have so far, and yet Brandon still hasn't found his match.

I hesitate to feel sorry for him, though, because that's kind of his own fault. I understand it was heartbreaking for him to hop into the booth of truth with Christina, who he fell head over heels for from the beginning, only to find out that she's not his match. Since then, he's been halfheartedly playing the game, and because of that, he's still match-less. But instead of pining away for a girl he met a couple of weeks ago, shouldn't he be giving the others a shot? Dude, there's a million dollar prize at stake here, and when the show is over, you and Christina can be together. Just ride it out.

But now that we know definitively that Christina, Shelby, Paris, and Alexandria are not his match, who is? Let's narrow down our options. I think one of the following three ladies is the one.

In my opinion, Jasmine is most likely Brandon's match. After choosing her in a matching ceremony two episodes ago, they got to know each other better on a Getaway Date and discovered they actually have a lot in common. They totally would've connected more had Christina not been in the back of Brandon's mind, but whatever.

Would it not make perfect sense that the two people who are pining over other people (like Briana is for Curtis) would end up as each other's matches? It would also make for a neat little ending, too — since both of their hearts are elsewhere, once the show wraps there will be no hurt feelings when Brandon decides to get back with Christina and Briana can be with Curtis again.

As soon as the other female who has the same match as Christina is revealed, things will get a lot easier. 'Til then? Who wants to make-out with someone just to piss off somebody else? Let's have it, MTV.