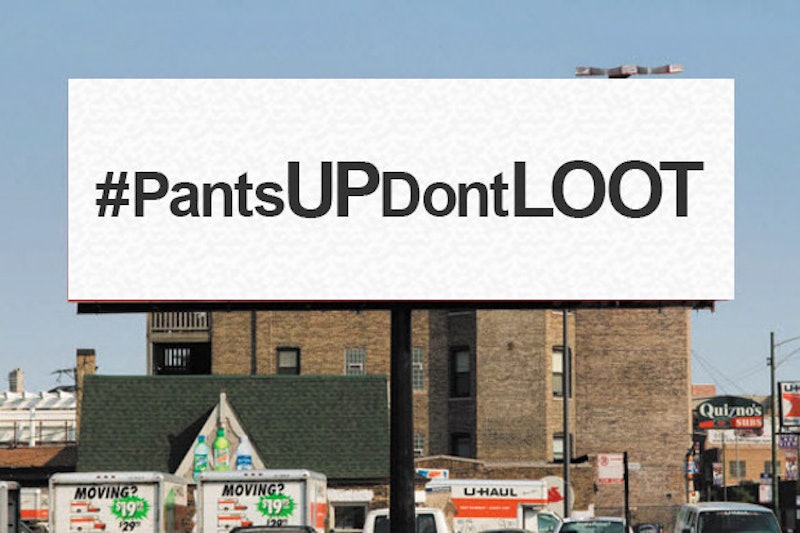 If you've been keeping track of the Ferguson protest movement, odds are you've already heard its signature phrase: "hands up, don't shoot." In the aftermath of the shooting death of 18-year-old Michael Brown in August, by Ferguson police officer Darren Wilson, countless people have taken to the streets to protest police violence, and assert the value of black lives. "Hands up, don't shoot" is a reflection of that, and it's been an essential rallying cry over the past few months. Darren Wilson supporters' gross "Pants Up, Don't Loot" billboard, on the other hand, is anything but.

That's right. For the relatively low price of $3086, this glaringly offensive billboard could be going up somewhere in the St. Louis area soon, thanks to the donations of a mere 130 people to the project's IndieGoGo page. That means that the project netted an average of $23 per donor, although an examination of their funder page reveals that levels of financial support were actually pretty staggered — one person, who apparently really likes this billboard, donated $300 on their own.

This crowdfunding campaign is for the purchase of a billboard in the Ferguson, MO area. The billboard will display black text on a white background with the text "#PantsUPDontLoot". After some initial confusion we are working with other, undisclosed companies in the area that are willing to create and display this image. The funds collected from this campaign will be used to purchase this billboard for as long as possible. Lamar originally quoted us ~$2,500 for 1 month but others have come in under that amount. Whatever funds we receive will go directly to keeping the billboard campaign up as long as possible. If we come to an agreement with a company and can fund it for 3 months, 5 months, 7 months..., we will.

It almost goes without saying that this billboard idea is, at its core, a racist barb directed at an aggrieved community. But it's important to make very clear — it'll be a crying shame if this image actually goes up above the streets of St. Louis county in any capacity.

As happened once already during the Ferguson protests, this billboard idea draws the role of crowdfunding websites into sharp focus. Back in August, a GoFundMe page raising money in support of Wilson sparked a lot of controversy, complete with calls for the website to shut it down. In the case of IndieGoGo, their terms of use leave it somewhat unclear whether this should have been stopped (the money, after all, has already been raised), but there would certainly seem to be an argument.

Indiegogo is not a place for hatred, abuse, discrimination, disrespect, profanity, meanness, harassment, or spam. Do not:

We reserve the right to remove Campaigns and terminate User accounts for such activities.

While the phrase "pants up, don't loot" might sound like the sort of thing to emerge from some reactionary, tone-deaf conservative group, as Talking Points Memo points out, the phrase was first prominently highlighted by conservative publication National Review , a longtime staple of the right. Of course, that doesn't mean that they aren't also capable of being reactionary and tone-deaf — one of their most prominent writers wants women to be hanged for having abortions, after all — but it's worth noting, all the same.

Of course, on the ground in Ferguson, there are more pressing matters right now than whether this crappy billboard goes up. The news of the grand jury's decision whether or not to indict Wilson for Brown's death is anticipated soon, and police forces prepping for a potential non-indictment has fueled pessimism. But, for what it's worth, the popular Ferguson protest hashtag #BlackLivesMatter speaks to the universal importance of the protest, and its likely durability regardless of what happens to Wilson — remember John Crawford in Ohio?

Basically, whether Wilson is charged, or set free, these issues of race and police use of force go well beyond Ferguson, into cities and towns all across the country. As such, I'd wager that "hands up, don't shoot" is going to have a longer, stronger life than its inflammatory imitator, no matter how big the billboard.